How to go about parenting teenagers ?

Parents have to take the initiative to fill the gap between the two generations. When the child turns sixteen, you must interact with him as a friend would. Speak to him in a friendly manner so that your words will be more appealing. The child will not heed his parent if the parent continuously asserts his role as a mother or father. 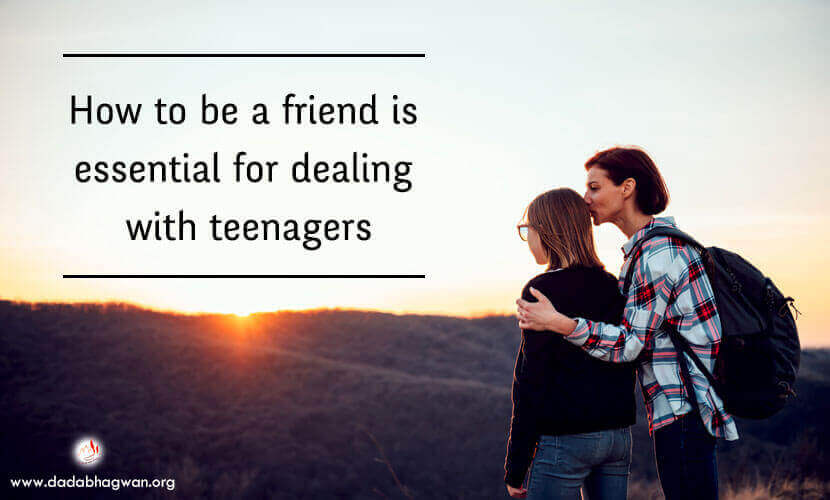 Knowing how to be a friend is essential for dealing with teenagers. Following are the tips for the same:

Param Pujya Dadashri has made an incredible discovery for today’s generation that the youth of today have a healthy mind. They have a minimum ‘my-ness.’ They remain distant from evil malice. They are educated but possess less practical training.

Adjust according to the times. If your son comes home wearing a new cap or tattoo, don’t ask him, “Where did you get such a thing?” Instead, adjust and ask, “Where did you get such a nice cap from? How much did it cost? You have got a good bargain!” This is how you should adjust. What our religion says is, “See convenience when there is an inconvenience.” The science of the five senses shows inconvenience, and the Self (Atma) shows convenience. So remain in the realm of the Self.

Some parents worry about their young daughter. Here Param Pujya Dadashri imparts understanding to apply practically in below discourse:

Questioner: I am not able to let go of my teenagers to become independent. I have no trust and have suspicions on them. What should I do?

Dadashri: I had cautioned a man once about his daughter. I told him that the present time is such that living in today's environment has negative effects on people and that his daughter was no exception. He understood what I told him, so when his daughter eloped with someone, he remembered me. He came to see me and told me that whatever I had told him turned out to be true and that had I not explained things to him, he would have killed himself over the matter. This is what the world is like. It is haphazard, and people should accept that whatever happens is justice. Is a person to take his or her own life over such matters? No, that would be foolish. People merely hide behind their façades and claim to be noble.

A relative of mine had four daughters who were going to college. He was well informed about everything and expressed his concern about his daughters. He told me that since his daughters were now grown up and going to college, he could not trust them. So I told him that he should go to their college and follow them around, but how long could he keep this up. I told him he was foolish in not knowing whom he should trust and whom he should not. Instead, he should explain to his daughters that they come from a respectable family and that it was their duty to uphold the reputation of the entire family. Parents should caution their children this way, and after that, whatever happens is correct. They should not be suspicious. So many people harbor suspicions. Those who have more worldly awareness have more suspicions. But where will such suspicion lead them?

Therefore, whatever suspicions arise in your mind, you should eradicate them immediately. You suspect your daughters even when they go out to have simple fun. Do these suspicions allow you to be happy?

Do not let suspicions take hold of you even when your daughter comes home late at night. It will be to your advantage to destroy your suspicions. What is the use of such unfounded mental anguish? Nothing can change in just one lifetime. Do not hurt your daughters and sons unnecessarily. Just tell them directly that they should not come home too late because it is not right for young adults of a respectable family to stay out too late. You should talk with them calmly and explain things to them, but you should not have suspicions about who they might be seeing or what they might be doing. If your daughter comes home late again, then again you should caution her in the same way. If you throw her out of the house, there is no telling where she will go. What will you achieve from this? Instead, it is to your advantage to resort to a solution that is least destructive. And that is why I have told everyone that even if their daughters come home late, they should let them come in. Some parents are so strict that they will not let their daughters enter the house and dismiss them from outside. These are strange times, full of anguish and suffering. Besides, this is Kaliyug. So you should explain things to them in a calm manner.

Worried about getting the children married?

Dadashri: Your daughters have come with their own karma. You need not worry about them. Just take good care of them. They already come with a suitor for themselves. Do you need to go around telling people to give birth to a son for your daughters? They already come prepared. When your daughter becomes of age, you become anxious, but you do not know that somewhere in this world there is a suitable boy already waiting for her. So stop worrying and sleep soundly.

Worries create obstructing karmas (antaraya karma) and they only serve to prolong the work at hand. If a friend tells you about an eligible boy for your daughter who is of age, you should make arrangements for them to meet. But if you worry, your anxiety will just be another obstacle for you to overcome. Just ask yourself whether anything in this world is in your hands. Do you have any control over any situation? Do you even have control over your own bowels that you can go to the bathroom at will? Is there not some other force at work behind everything?


1) In the worldly life, what is misery? It is the pain created from wrong suspicions.

3) Why do worries occur? One becomes involved (becomes one) with the thoughts that arise and that is why worries arise.

4) If one can remain worry-free during worrisome situations; it is called ‘science’ (vignan, spiritual science). And our people sit on an ‘easy chair’ and they look ‘uneasy’.