What are the reasons behind marriage problems?

When you get married you create an ideal marriage in your mind, ‘My marriage will be like this and like that’, but gradually your picture of an ideal marriage remains, just that, a picture. So what are the reasons behind marriage problems? 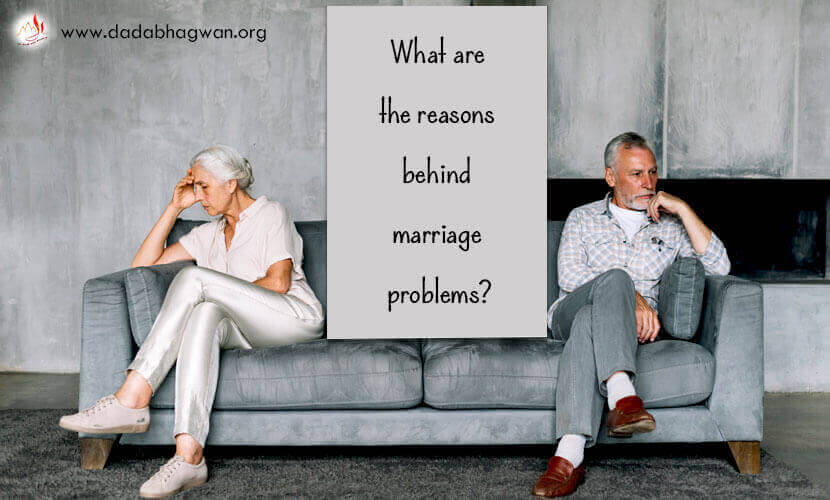 Param Pujya Dadashri has provided numerous reasons behind the problems in marriage. Some excerpts of actual spiritual discourses with Him have been added below as they are.

What is the point in showing your spouse the mistakes they are already aware of? Men have a habit of pointing out their wives mistakes and telling them off. Even the wives do that too!

People deliberately point out minor and obvious mistakes, and that is why their lives are so full of clashes. People think that by pointing out the mistake, they will improve. On the contrary, they get worse. It is only when they think about their mistakes, that you can talk to them directly about how they can improve.

Communicate openly with your partner, as you would with your friend. We do not argue with our friends daily. Do we? Do we openly point out their mistakes to them? No! That is because we want to keep that friendship!  Whereas with your partner you do not think! You can only show them the mistakes they are not aware of.

Draw attention to only the faults they are not aware of or cannot see for themselves. If you nag them about their mistakes they already know of, you will hurt their ego. They will then wait for a chance to repay you.

Hiding your weaknesses by blaming others

When anything goes wrong in our lives we always look for people to blame and that is how it is in marriage. We always blame our spouse for our problems. However, if we accept that the mistake is ours, then we can bring about a solution and avoid marriage problems. If we do not accept our mistake, then no solution will come about.

Lack of Trust in a Relationship

Most conflicts at home arise from doubts and suspicions. Suspicion gives rise to vibrations, which then ignite into flames. If a person were to become free of all suspicions, then these flames would extinguish. But if both the husband and wife start to become suspicious, then the flames would burn everything. One of them would have to become free of doubt. Those who harbour doubts lose their harmony and liberation. So if you have suspicion about anyone, do not harbour them. Be cautious, but do not be suspicious. Suspicions will kill you. Suspicions are such that they will not leave you until you die.

Making comparisons with others, causes suffering

We experience suffering the moment we compare our spouse or ourselves with others which creates marriage problems.

Param Pujya Dadashri explains, “People have haphazardly labeled everything as suffering without thinking or analyzing it. For example, you have a set of old sofas and your friend who never had any just bought a new set. When your wife sees them, she comes home and tells you how nice your friend’s sofas look and complains that the ones you have at home have become old. Now the suffering has arrived in the home. There was no problem until she saw your friend’s sofa, but the moment she set eyes on them, she brought the suffering with her.

If your friend builds a bungalow and you do not have a bungalow, and your wife sees it, she will come home telling you how beautiful your friend’s new bungalow is and that you never build anything. That is suffering. These are all self-created sufferings.”

Param Pujya Dadashri says, “How can you afford to accept arguments that occur every day? You have accepted this because you do not understand. Those who are aware of the real nature of this world would lose sleep even over a minor difference of opinion. Husbands and wives have vibrations. They emit vibrations even as they lay in bed thinking, “He is awkward, he is useless, he deserves to be thrown out!” Only living beings can emit vibrations. Those, which are not living, do not create vibrations. Without any understanding, people come to accept that discord is inevitable with married couples. You fool! Nobody has ever seen this Dada quarrel. Why all this noise? All this noise is ultimately harmful to only you. We ourselves are responsible for these conflicts.”

These conflicts stem from differences of opinion, which arise within the mind when a married couple does not agree and see eye to eye. If the difference is not resolved then the next day, the distance between them starts to increase, which gradually develops into a dislike for each other. Thereafter enmity may arise between the two and as a result increase marriage problems.

People do not have the ability to solve problems with their spouses or their children and when clashes occur they fall deeper into confusion.

Questioner: The husband believes that it is his wife who must compromise, and not him.

Dadashri: Yes that means the limit has been reached. If the wife has to compromise and he won’t, it means that things have come to head. A gentleman on the other hand, would speak in a manner that would make his wife happy. He would move forward in this way, but you conduct yourself in such a way that your situation stagnates for weeks and months on end. Nothing gets resolved. Unless there is closure in the mind of the opposing party, you will have difficulties. Therefore, you must compromise.

Conflict due to Intellect

Questioner: What is the reason behind this discord?

Dadashri: The differences occur because the husband thinks he is intelligent and the wife thinks she is intelligent. Here come two bags full of intelligence! You wouldn't even get a dime if you were to sell these bags! Instead, be aware and observe her intelligence…oh my! How intelligent she is! That way even she will calm down. But if you exercise your intellect and she does the same, there will be a fight. Who experiences more discord, you or her?

Questioner: She is the one who gets upset more.

Dadashri: What is discord? Let me explain. Have you ever played the game of tug-of-war?

Dadashri: Two teams of players will pull a rope at opposite ends. Conflict is synonymous to a game of tug-of-war. What will happen if you both are pulling strongly at opposite ends?

Questioner: It will break.

Dadashri: If it breaks, you will have to tie a knot in it. Instead of having to tie a knot, what is wrong with simply leaving the rope intact? If she pulls hard, you should just let go.

Questioner: But of the two, who should be the first to let go?

Dadashri: The one who has understanding. The one who has the right understanding will let go and the one who is using the wrong intellect will continue pulling. But when you let go, do not let go all of a sudden, because if you do, she will fall. Let go very gradually, otherwise the poor person on the opposing end, will fall down. So from now on, will you let go of this rope? Let go, otherwise you will have to tie a knot in it and then use it. Does it look good to tie knots in it every day? You have to use that rope again! What do you think? Do you have discord at home? It should not occur at all. If it happens then you are an unfit husband, and if the wife does it, then she is an unfit wife.

Unaware of the Art of Living

Dadashri: Do you ever have kalesh (quarrels) at home? What do you think about conflicts in the home? Do you like it?

Questioner: The world does not function without quarrels.

Dadashri: Then God will not stay wherever there are quarrels.

Questioner: But there should at least be some quarrelling!

Questioner: Not a single moment.

Dadashri: Not even for a month? You get good meals to eat, you wear beautiful jewellery, and yet you quarrel. You quarrel because you do not know how to live life; you do not know the art of living. This is what causes quarrels. All people care about is the art of making money. You do not think about how to live life because your thoughts are preoccupied with making money. Shouldn’t you think about this?


1) Just as no man has ever been happy by making his wife miserable, no woman who has made her husband miserable has been happy either.

2) The words 'we' and 'ours' turn into 'mine' and 'yours', initiating quarrels and rivalry.


Watch video on Jealousy between Husband-Wife