Why should I not hurt anyone's ego when he/she is wrong?

Questioner:  In one's daily business, it is difficult to avoid hurting the ego of some individuals, no matter how hard we try. 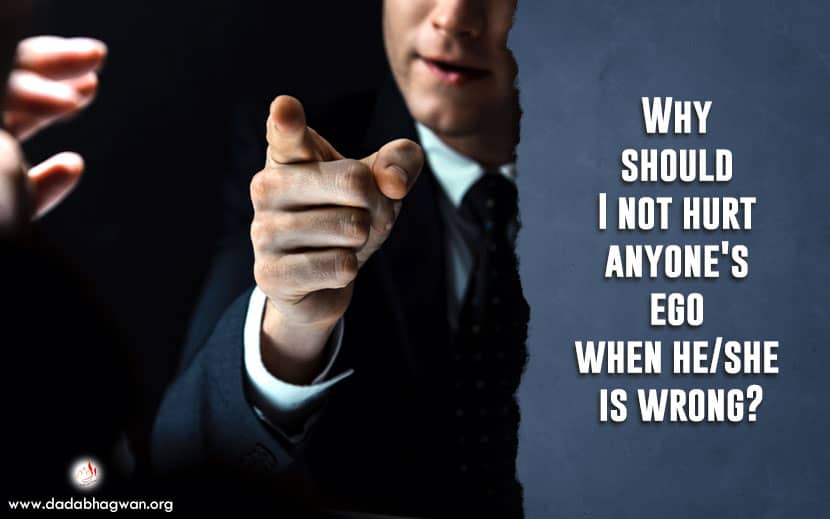 Dadashri: That is not called hurting someone's ego. The ego is hurt for instance when you tell someone to shut up and sit down. You should not hurt anyone's ego in this manner. As far as your business is concerned, when you say that you hurt someone's ego, it is really not the ego that is hurt, but rather the mind that is hurt.

Questioner: Ego is not a good thing, is it? Then what is wrong in hurting it?

Dadashri: You should not hurt his ego because he believes that he is the ego. He is everything he does. Whatever he does, he believes he is doing it. That is why you cannot hurt it. That is why even at home you should not scold anyone. You should make sure that nobody's ego is hurt. When a person's ego is hurt, he becomes estranged and will not come close to you again. You should not demean someone by calling him useless. Yes, you may scold him, as long as you do not hurt his ego. It is fine if he gets hit on the head, as long as his ego is not hurt.

You should not have contempt for anyone, even for a servant. Contempt hurts the ego. If you do not need his services, then tell him gently that you no longer require his services and settle the matter by giving  him some money. You may recover the money but you should not hurt his ego. Otherwise he will harbor revenge against you. This will hinder your salvation.

This is a very subtle point. If you hurt someone's ego, then you have to ask for inner strength (in accordance with this kalam) from the Lord within. The opinion you had previously, of hurting someone's ego, has now changed. You are not held responsible for your actions. Your actions are contrary to your intent or bhaav of not hurting anyone. Your actions are a result of your past life and are, not under your control.

Questioner: What does it mean to be separate from one's opinion?

Dadashri: 'Dada Bhagwan', the Lord within, now knows  that you no longer have intentions of hurting anyone's ego but it still happens. In contrast, the people in the world hurt others and are in agreement with their actions. Through the bhavna of this kalam, your opinion is separated from your actions. Therefore, you are free from any future negative consequences.

You do not have to do anything. All you have to do is ask for the strength. The result of this bhavna will come in due time.


1) 'No one should be hurt in the slightest' - such should be one's egoism. That is a 'positive' ego.

2) If we create an environment where someone is hurt, then it will create Conflict (affliction) within us.


Watch the Video on science of inner intent.