Who runs the world, according to the Srimad Bhagavad Gita?

Even God does not have control over the prakruti

Questioner: The first sentence in the Gita says, ‘Prakruti prasave shrusti’. So in the Gita, God has said that this world (shrusti) is created by me. 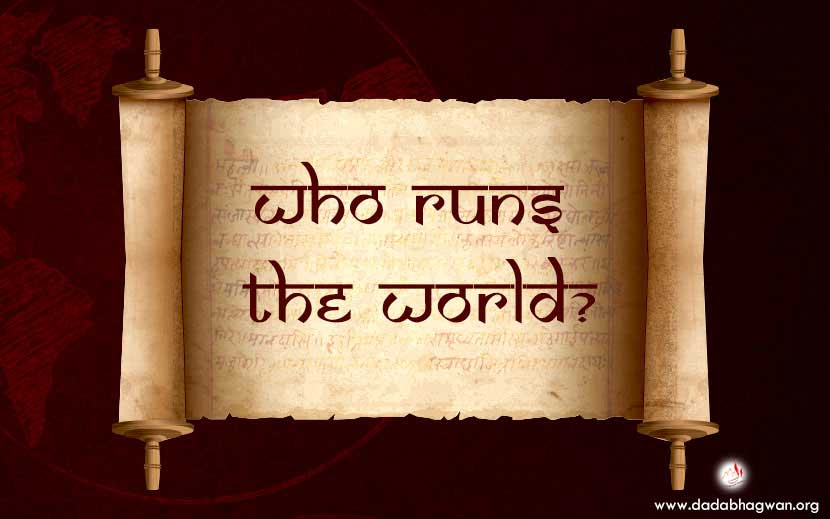 Dadashri: That is correct. Certain things have been disclosed in the Gita. And certain things have been implied. Where it says ‘I’, it is in reference to the Shuddhatma, the pure Soul, the Self.  It is not Lord Krishna himself. But people interpret it in their own ways. And where prakruti is concerned, no one, not even God can do anything about it. That is the work of vyavasthit shakti. Whether one is going to be attractive or unattractive; it is all under the control of vyavasthit shakti. It is very balanced and precise; nothing can differ there.

Questioner: But, whether a person is going to be good looking or bad looking - which vyavasthit shakti does - what is that based on?

Dadashri: We our self, are the basis for that. Whatever bhaav (inner intent) you had in your past life and you became absorbed (avasthit) in those intents; this is what comes through as vyavasthit.

Questioner: So if one keeps thinking about a bull, then does he come back as a bull in his next life?

Dadashri: If he has inhumane or bestial thoughts, he goes into animal life form. And if he thinks like a gentleman, if he has humane thoughts, then he will come back as a human. And what are godly thoughts? It means superhuman, meaning that I would oblige you even if you cause me harm. If you harm me again, then again I would oblige you. If this continues ten times like this, then one is a superhuman. He will be born in the celestial world (devalok).

So who makes the note of the act of charging (sarjan, cause) that is going on within us? That is the work of vyavasthit shakti. It makes arrangement of that note and gives the effect. And discharge (visarjan, effect) is completely in its control; in control of vyavasthit. All the discharge is in its control. We simply believe that the charging is under our control; it too is animit, apparent evidentiary instrument.  What is it?

Dadashri: If charging were independent, then the entire world would run completely differently. Therefore it is worth fully understanding this world.

Lord Krishna has said, “God has not created this world; it has come about naturally (swabhavik).”

Lord Krishna said that this world has indeed arisen naturally. It runs naturally. That is how it is mentioned in the Gita. Therefore, everything is happening naturally.

Vyavathit runs this world. It is not the creator of this world.  The world has come into existence naturally. And the energy of vyavasthit, it too is natural and has been in existence since infinity. This is not something that one has to create. The main elements in this world are natural. They become vibhaavik, deviate from their nature when they come into the relative - into worldly interactions.

What if the world comes to an end? It is not at all likely to do so, because the world is natural, its very nature is such that it will continue to run forever.  From the banyan tree comes the seed, and from the seed comes the banyan tree. People say that God runs this world. If someone were to run it, then sooner or later it would definitely come to end. Even when one attains liberation (moksha), it happens naturally. Therefore there is no such thing as it will stop or it will become ruined. Lord Ramchandra left, Lord Krishna left, and yet the world goes on. No one has created this world. It has occurred naturally. So what is the nature of this world? It is ever changing; Everything is constantly changing.