Why can’t I control anything in my life?

Give a thought to the following questions before you determine to take control of your life when everything is out of control and you are feeling trapped and helpless: 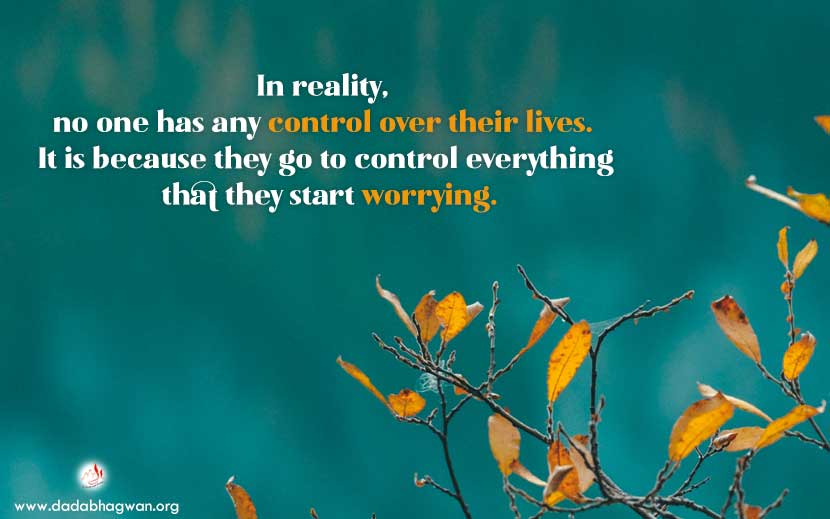 In reality, no one has any control over their lives. It is because they go to control everything that they start worrying. So then, who controls what happens in our life? Is it destiny? Is it possible to change something by putting in effort? Or is there something else at play?

People talk about fate and destiny versus independent self-effort. Some rely on destiny alone whereas others rely on self-effort alone.

When people make a lot of money, they take credit for it and claim it was through their effort and hard work. If they incur a loss, they will blame their horoscope, destiny, bad luck or even go as far as to blame God. When everything runs systematically, success is the result of our own effort, but when there is a break in the system then people blame God. Is that right? The effort to convert that, which is disorderly, into order, is defined by the world as independent effort (purusharth). If a person were truly capable of doing purusharth (effort), he would never incur a loss. Purusharth knows no failures. Thus, it is a contradiction. So, do you still believe that you can take control of your life?

People believe that they are the doers; while in fact, it is a result of past life karma that they do things including striving to control life. Every leaf and branch of a neem tree is bitter. It is bitter through and through. What effort does the tree have to make for that? Everything that is manifest in the tree has come from its seed. Similarly, human beings act according to their innate nature (prakruti), but merely claim, ‘I am the doer’ and thus exercise their ego. Things occur and materialize because of your past karmas coming into effect, and to claim, ‘I did it’ is subtle pride and egoism.

‘So, should I just leave it all to destiny?’

So then, who is the doer? 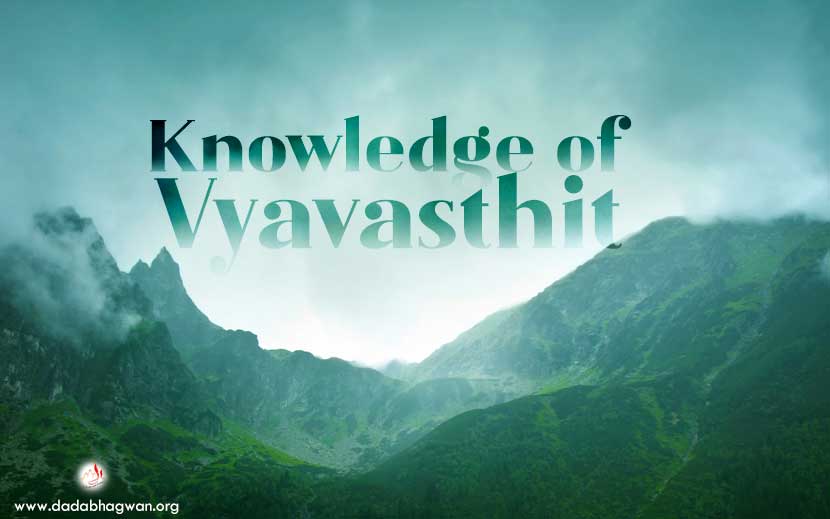 Vyavasthit is that which happens only through scientific circumstantial evidences. The knowledge of vyavasthit renders total satisfaction in every situation.

Param Pujya Dada Bhagwan explains it with a simple example:

“If this glass in your hand begins to slip out of your hand and you make every effort to save it and it still breaks. Who broke the glass? You had no intention of breaking it; on the contrary you made all efforts to save it. Then, did the glass wish to break? No, that cannot be so. No one else was present to break it either, so who broke it? It was Vyavasthit. Vyavasthit works under exact principles of natural laws. It is not haphazard. If the glass were not to break according to the principles of vyavasthit, then how would these glass factories remain in business? Vyavasthit has to look at your interest and also the interest of the glass factory and the livelihood of thousands of its workers. Therefore, the glass will break according to this law and no one will be able to prevent it from breaking. So many people get agitated and restless when things break. If a servant is serving tea to some guests and breaks a cup, his master becomes furious from within. All he can think of is how he will slap the servant a few times as soon as his guests leave. And some people even do this. But if he knows and understands that the servant did not break the cup and that it was vyavasthit, then would he do anything? Would he not remain absolutely unaffected? In reality the poor servant is merely a nimit (instrumental in the process), and yet these wealthy people assault their servants. You should never attack a nimit; if you do, it is a great harm to yourself. Instead why not find the root cause behind it and then you will find your solution.”

Apply the knowledge of vyavasthit

So, instead of thinking to take control of your life, consider putting positive efforts. Putting all the possible efforts to complete a task with a positive attitude adds positive evidences from our side. Prayer is also one of these positive evidences. When we do not worry, we are not adding any negative evidence. These evidences when combined with the other evidences of time, space, good and bad karma of all those involved, will give the final result. That is vyavasthit. Once we learn to accept the result, be it good or bad, once we understand that nobody is the doer, our life will be very peaceful and filled with bliss.