How can you get rid of restlessness or a restless mind? 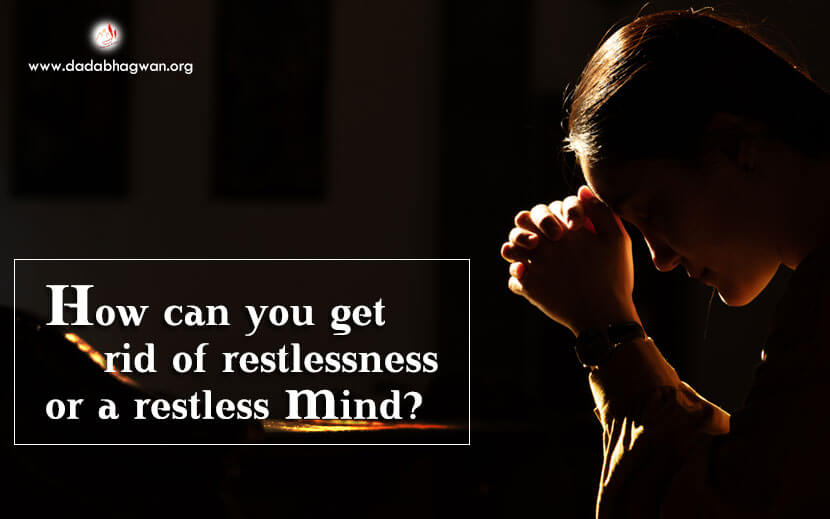 Restlessness Is the Cause of Misery

What can they do when the restlessness occurs? If there is no facility for an emergency telephone on the highway at the sixty seventh mile mark, they will complain that they want a phone installed there. If you ask why, they will tell you that it is because there is already a phone on the first and the third furlong, but there is none on the second furlong. Look how much agitation they have. That is madness. There is so much to eat and drink and yet the whole world is sunk in madness. People are in nothing but misery and pain. They are permanently miserable! There is no happiness, not even for a moment. Until the energy of stillness arises within, how can a person be happy (sukh)?

Questioner: Is it possible to find stillness between two thoughts?

Dadashri: Such stillness is useless. It is the stillness of the “packing” (body; non-Self complex), which is of no use. That is not considered stillness. Stillness should be unshakable. Stillness should not leave even if there is a looming threat over your head of an atom bomb about to fall. That is true stillness. People’s minds are restless (chanchal). Whereas my mind moves on steadily. It is like where you have to shake hands with two thousand people. You shake hands with one person at a time and you keep moving along as you shake hands with them. That is how it is for me; the thoughts of the mind ‘shake hands’ and move on. No single thought will remain in one place, not even for a second. And for you, the thoughts get stuck for fifteen minutes to half an hour at a time. Do they or do they not?

Questioner: Yes, they do.

Dadashri: I too, have a mind. I would be considered ‘absent minded’ if I did not. My mind is very solid and steady (prakhar). It will not be affected even if there is a threat of an atom bomb in the next hour. There is not the slightest restlessness. It moves on at a steady pace. And your mind is like a fly hovering around a lump of sugar. It hovers around something it sees.

Questioner: How can we get rid of such restlessness (chanchalata)?

Dadashri: After attaining Gnan, there is no need for You to get rid of restlessness, is there? You (the Self) just have to keep ‘seeing.’ I have given you this Gnan, so You have to keep ‘seeing’ what the restlessness does. However, others (without Gnan) become involved with the mind. They dance along with their minds. Hey! Why don’t You just keep ‘seeing’ it as it dances? But no, you dance along with it. You join in with its dance when you have a pleasant thought, and when you have a bad thought, you fight with it by saying, “Why did you come?” When you have a bad thought, You will know that the mind is bad, and that is why the thoughts are also bad. When bad thoughts arise, then depression occurs. And when good thoughts arise, there is elevation. I am trying to prepare You in such a way, that no one in the world can depress you. On the contrary, the one who comes to depress you, will himself go back feeling depressed.

Questioner: Is this stillness like the state of dreamless sleep (shushupti)?

Dadashri: There is nothing like stillness. Do we not stop the engine to cool it down when it gets hot? That is how it remains non-active during deep sleep. The mind gets heated all day and then it stops. Sleep cools down all the ‘machinery’.

Questioner: Is the desire to attain Gnan considered awareness of the Self?