Why worry is a major problem of most people? What are the causes of anxiety and worry?

We have all struggled with worries in our life. There are times when we worry more than others and there are times when we should worry but we do not. What is the reason for this? Why worry and anxiety has become so common? What causes anxiety and worry? Param Pujya Dada Bhagwan has given us numerous causes of worry, let us have a look:

Have you ever observed a toddler laughing and playing even if his mother is sick? While his twenty-year-old brother is very worried about his mother?

Have you observed that laborers sleep soundly every day, whereas wealthy business executives worry constantly? The laborers are content if their basic needs are met – food, shelter and clothing, compared to wealthy people, who do not need to think about their basic needs, yet they worry.

What is the reason for this difference? A sharper intellect. This is the primary reason why worry is common. The sharper the intellect, the greater the internal suffering. A person with a sharper intellect is able to analyze any situation very quickly and determine the advantages and disadvantages. They have numerous thoughts within a matter of seconds and their mind is not able to stop thinking. This sharp intellect is the cause of their suffering and worries.

When a man dreams of buying a bigger house, a better car, making more money etc. it is considered greed. He is consumed by thoughts on how to acquire these things and once he acquires them, he is worried about how he will be able to pay for it all. So, one of the reasons of why worry has become an impulsive habit is his greed.

When something goes wrong

When we face difficult situations, we often tend to blame others. By placing blame on others, we create unnecessary worries and suffering. The worries increase when anger-pride-deceit-greed increase, due to the hurt caused to the other person and its consequences. These actions lead to abhorrence and strain in our relationships, thus multiplying the worries and inner turmoil.

When you become the doer, you are the sufferer

The narrative below, explains how becoming the doer of something is the cause of worries and suffering.

One day I decided to prepare a sweet dish for my family. I was an expert in preparing that dish or so I thought. I had received tremendous applause for it in the past, so I was sure of myself. I was confident that the dish would turn out exactly as planned.

When I went to the kitchen, I found that some of the ingredients were missing. Therefore, I went to the market to buy them, and to my luck, all the shops were closed because of a strike.

I returned home empty-handed, unhappy that things did not go as planned and wondered what my family would think. With the available ingredients, I decided to make something else instead. I was pleased with my quick thinking and rushed to the kitchen to start cooking. This time, the gas lighter did not work. I used a matchstick and started cooking when the gas cylinder became empty.

Now what was I going to do? What would I tell my family? How would they react? These thoughts started to take over me!

I then realized that I used to succeed in preparing the dish because all the ingredients were available when and where I needed them. Any work is completed only when everything you need comes together at the right place and the right time, we are only one of the evidences. In the past, I used to take all the credit for everything, without recognizing the other evidences. That day I realized that I am not the doer of anything.

Had I not realized the fact that I was not the doer, I would have been disappointed and would have blamed others for not doing their part; the people who went on strike; the carelessness of the one who did not keep a replacement cylinder of gas and so forth. The blame, anger, conflicts would have resulted in worries, anxiety and internal suffering. 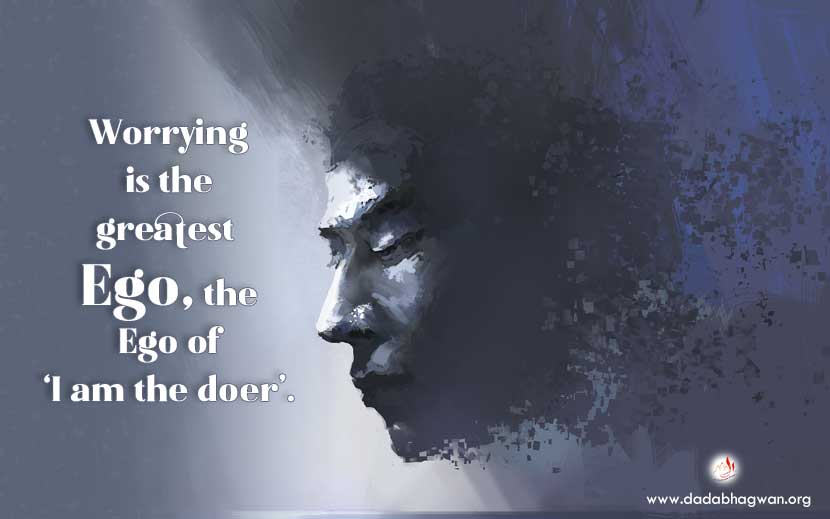 Worries arise because one believes that, ‘I am doing all this’ (as explained above). This is the subtlest reason why worry is so prevalent. One thinks that he is the doer of all the actions in his life. Because of this ego of doer-ship, he sets himself up for suffering in the form of worries, when events do not occur according to his plans. Worrying is the greatest ego, the ego of ‘I am the doer’.