Questioner: I would like to understand what is more important, Serving God or Serving Parents? 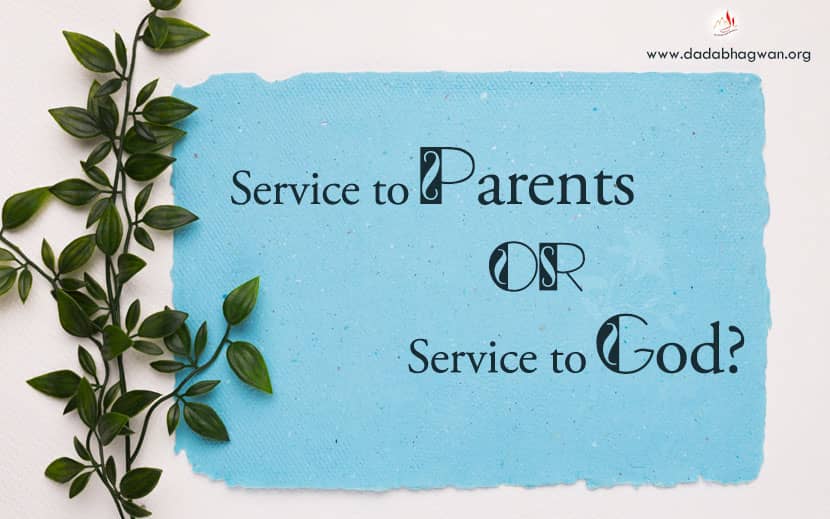 Dadashri: Serving one's parents is one's moral duty (dharma) religion, regardless of what that relationship may be. The more a person practices this, the happier he will be. Serving the elderly will give you happiness. If you give happiness to your parents, you too will receive happiness. Those who make their parents happy will never be unhappy.

I met a man I once knew in a spiritual community and asked him what he was doing there. He told me that he had been living there for the past ten years. I told him that his parents were seriously ill and were living in extreme poverty. He told me that he could not do anything because helping his parents would mean forsaking his dharma (religion). How can you call this a dharma? Dharma is to embrace your parents and your family.  Your worldly interaction should be ideal. How can the worldly interaction that forsakes one's relationship with his parents and his duty (dharma) be called a religion(dharma). Do you have parents?

Questioner: I have a mother.

Dadashri: From now on, take good care of her. You will not get the benefit of such an opportunity again. If a man tells me that he is very unhappy, I would tell him to take good care of his parents so that worldly miseries do not affect him. He may not become wealthy, but at least he will not have to suffer any pain (dukh). Then later, he is free to practice religion.

I, too, served my mother; I was twenty years old and was able to take care of her. The only service I did for my father was to carry his body on my shoulders at his funeral. It was then that I came to the realization that I must have had so many fathers in the past lives! Goodness! There must have been so many such fathers in my previous lives. What can we do about that? The least a person can do is take care of the one before him. Those who are not here are gone, but as long as your parents are living and present, take care of them. If they are not around, do not worry about it. Start again from where you left off. Service to one's parents gives instant rewards. One cannot see God, but at least one can see his parents.