Sumatinath Bhagwan Stories: Exploring the Past and Last Births

Sumatinath Bhagwan is the fifth Tirthankara of the current time cycle. He was born in Ayodhya. His father's name was King Megh and mother's name was Mangalavati Devi. Sumatinath Prabhu had a height of 300 bows.

After a long span of lifetime, He took Diksha. Tumburu is His Yaksh Dev and Mahakali is His Yakshini Devi. He attained Nirvana from the Sammed Shikharji Mountain. His symbol is goose.

Let’s now go through the life stories of the Lord’s past two births, prior to His birth as Tirthankara. Finally, we will go through the Sumatinath Bhagwan story.

There was a King named Vijayasen in the Shankhpur town of the Puskalavati Vijay (region) in Purva Mahavideh Kshetra of Jambudweep. His wife was Sudarshana. The King ruled the kingdom well and the Queen, too, was of a good nature.

Later, she got to know from the maid that the lady's name was Sulakshana and she was the wife of a merchant named Nandisen. She had eight daughters-in-law who served her, day and night.

Sudarshana did not have any child. After seeing Sulakshana, she felt sad and thought that it was not worthy to live a life without children. She then shared her feelings with her husband. Upon hearing this, the husband decided to worship their deity, without having food or water. On the sixth day of his fast, the deity blessed him and told that he would have a son.

Sudarshana got pregnant and that night, in a dream, she saw a lion entering her mouth. She described this dream to her husband, who in turn, called for the experts’ view to know what this meant. The King was conveyed that the Queen will give birth to a bright and powerful son. Therefore, the parents decided to name their son as Purushasimha.

When Purushasimha grew young, he was married to eight princesses. After a few years, he felt like taking Diksha. He went to the Saint from whom he intended to take Diksha and asked him what was the way to get away from the sexual pleasures.

The saint gave him a good understanding about the same. He said that one cannot achieve liberation if there are sexual desires. However, brahmacharya is not to be observed only physically. Only when brahmacharya is followed through mind, speech and body, when not a single thought arises in the mind and the consciousness, too, is absolutely clear of sexual desires, it is called ideal brahmacharya.

Accordingly, Purushasimha started following the principle of celibacy. He became detached and started living a life of an ascetic. As a result of vigorous penance and higher spiritual practices, he earned the Tirthankara-naam-and-gotra-karma. Completing his age, he reincarnated as a celestial being in Vijayant (one of the upper world areas) in his next birth.

The Last Birth as a Tirthankara

The Soul of Purushasimha descended into the womb of Queen Mangalavati, the wife of King Megh in Bharat Kshetra. Being a Tirthankara, He was born with three types of spiritual knowledge namely, Shrut, Mati and Avadhi. King Megh ruled his kingdom quite well.

There is one very famous story about his justice-loving nature. It so happened that two women, who looked quite alike, entered in the King Megh’s courtroom. They had arrived with a small kid to seek justice. One of the ladies came forward, introduced herself and the other lady as wives of a rich marine merchant, and narrated the story before King, which goes like this....

"Sire! Some time ago, we with our husband, a native of Ayodhya, travelled to a distant foreign country to do business. There, this child was born. We both took good care of the child and raised him with love. After earning a lot of wealth, our husband decided to return. However, on our way back, our husband died, leaving behind the entire wealth and property in his son’s name. The child is genuinely mine but this second wife claims that she is the mother of this child. Indeed, this is a conspiracy to take the wealth that the little one would inherit. I seek justice from you.”

The other woman also narrated the same story and claimed that the child was hers. Finally, both began to shout and argue in the courtroom.

The small boy did not know who his real mother is, as both loved him equally. Further, as they stayed in a remote place ever since he was born, there was no eye witness to verify the facts.

Upon listening to this story, King Megh was puzzled. Even his ministers were unable to provide a solution. The King did not want to take any wrong decision or inadvertently punish the innocent. Hence, he adjourned the case for having his meal. During the mealtime, he narrated the story to Queen Mangala. The Queen smiled and said, "Your Highness, let a woman handle the issue of these women. Please allow me to resolve it."

Next morning, Queen Mangala came to the courtroom. There was no clear indication in the nature and behaviour of the two women to ensure the genuineness of the right mother. 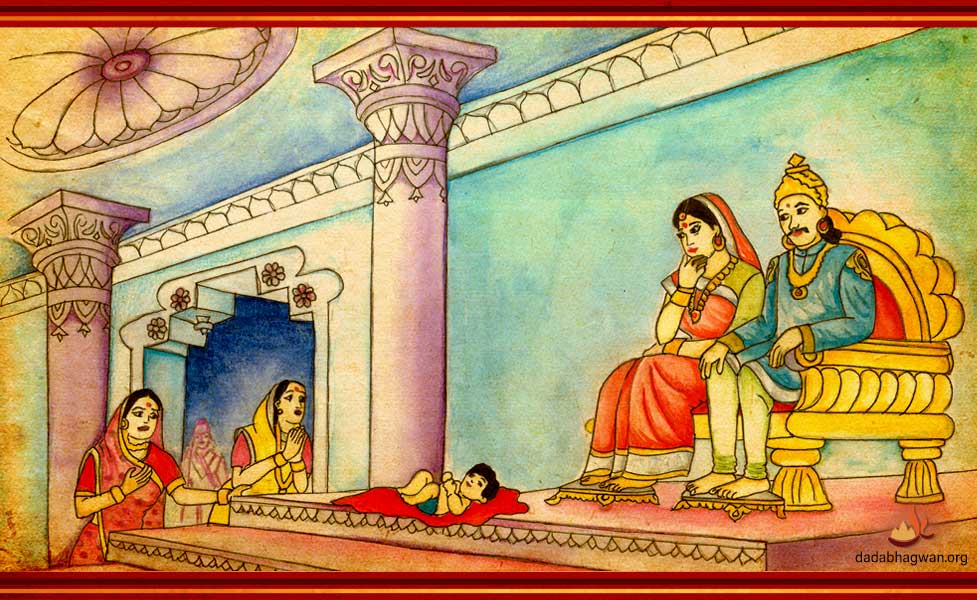 Hence, the Queen proclaimed, "This issue has no straightforward solution. Both the mothers are claiming as their own son, and we have no way to prove who is speaking the truth. Hence, let’s defer the decision. Since I am carrying an extra-ordinarily virtuous Soul in my womb, we shall allow Him to grow up and do the justice. Until then, the son and the property of the businessman shall remain in the custody of the King."

One of the mothers happily agreed to what the Queen suggested. However, the other mother, who seemed to be in great pain and despair, urged before the Queen, "No! Please don’t do that. How will I live without my son for so many years? Instead, you give him to this lady; at least, I will be able to see him every day.”

The Queen was quick to recognize the genuine concern of this mother, and thus, announced her judgment that this woman is the real mother of the child. She ordered imprisonment for the other lady, who out of greed for wealth, had lied.

Upon hearing the judgement, the imposter lady begged for mercy. Realizing that the lady had learned the lesson, the Queen allowed to let her go. Everyone in the King’s assembly were greatly awestruck by this witty judgment.

Queen Mangala gave birth to a wonderful son! A feeling of love and peace spread all around! Since it was obviously the influence of the holy Soul in the womb that led to the Queen’s wise judgement, the parents decided to name their son as ‘Sumati’, meaning right thinking!

The childhood of Sumatinath Bhagwan passed smoothly amidst His caring parents and the company of the celestial beings, who played with Him and entertained Him. Soon, He grew to a young and handsome Prince. He then got married.

Thereafter, upon the request of His father, He took charge of the kingdom. People of Ayodhya were greatly pleased to welcome their young Prince Sumati as their new King. He ruled the kingdom peacefully for many years.

After a long and peaceful reign, upon the request of the celestial deities, King Sumati took Diksha and became an ascetic. After 20 years of Diksha, He attained Keval-Gnan (Omniscience). 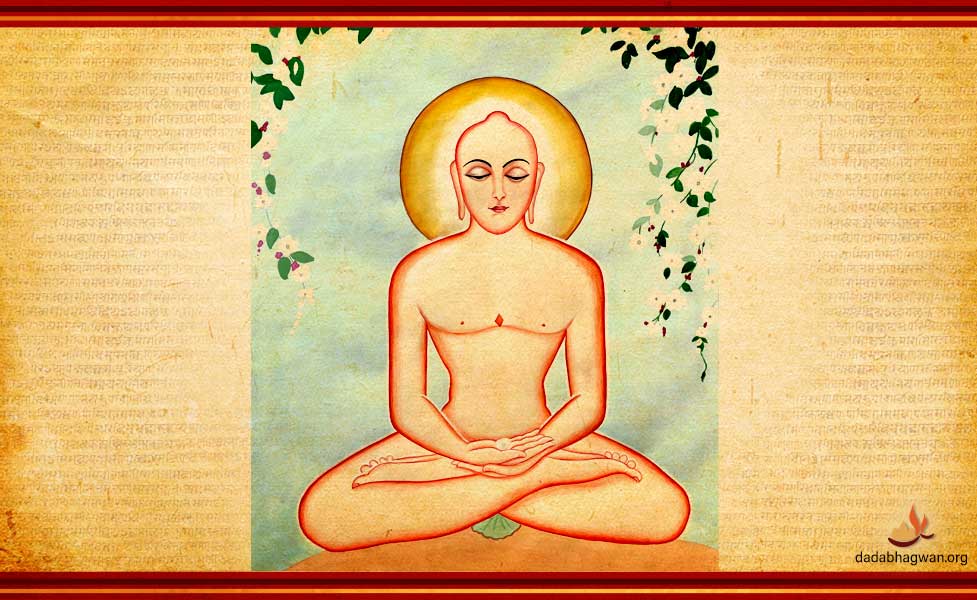 After attaining Keval-Gnan, Sumatinath Bhagwan gave Deshna on the Ekatva bhavna. He explained how in this world, sadness-happiness, right-wrong are all based on our karma. We have bound it; therefore, we have to suffer it. Nobody else can share it or can even suffer on our behalf. We feel that our parents, our relatives are ours; we all share our happiness and unhappiness together. However, when time comes, we realize that no one is ours; no one else can share our suffering.

Demonstrating the same, here’s a life story of Param Pujya Dada Bhagwan. Once, He suffered a huge loss in his business, as a result of which He was unable to sleep at night. Just then, He saw that his wife was sleeping peacefully. This made him wonder, “Here, I am worrying so much. However, my life partner is fast asleep. She does not have an iota of worry regarding the loss I have incurred in business.” This inspired Him to think even further on the matter.

He realized that His business was in partnership, but His partner too and even the family members of the partner were all at peace. Although each one was an equal partner in the business, nobody was worried regarding this huge loss. It was only He who was carrying the burden of the loss and was suffering due to it. This made Him realize, “It is my mistake. The real knowledge is that no one can share my suffering.”