Recognized by the symbol of srivatsa meaning the wishing tree (kalpavriksha), Shri Sheetalnath Bhagwan is the tenth Tirthankara of this current time cycle. Born in the Bhaddilpur nagri (town), He was the son of King Dridhratha and Queen Nanda Devi. After a long span of life, He took Diksha and attained Nirvana. His height measured 90 bows. Brahma and Ashoka are His Yaksha Dev and Yakshini Devi, respectively.

Let us now go through the life stories of the Lord’s past two births, prior to His birth as Tirthankara. Finally, we will go through His final birth story.

Lord Sheetalnath, in His prior birth, was King Padmottar, who ruled in the Sushima nagri in Purva Videh Kshetra in Pushkarvar Dweep.

King Padmottar was a very noble and a kind person. He would always remain engrossed in religious practices with tremendous awareness of liberating himself from the worldly bonds. Day and night, he used to think about how to free himself from the bondage of the worldly life. He used to wonder as to when my karma of renouncing the world will unfold. 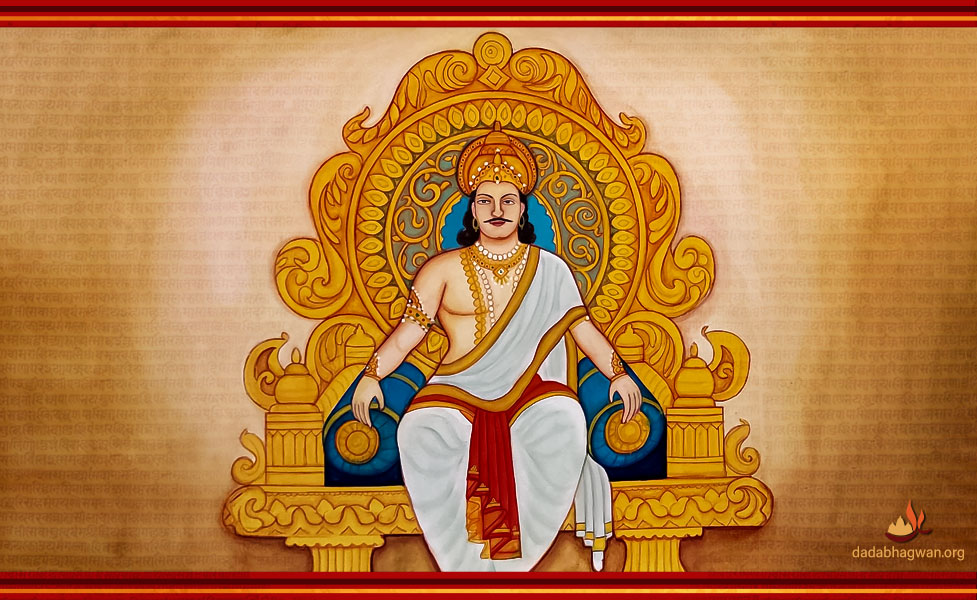 “The worldly life is a bondage,” this itself is a big awareness! Because commonly, one rarely realizes that this life is truly a bondage. There are such thick veils of illusory attachment that one generally likes everything about the worldly life. There is not a single thing in the world that is truly likable or that yields permanent happiness yet one keeps liking it.

How do we experience bondage?

We all need to wake up early in the morning. For this, we forsake our sweet sleep and complete our routine chores so that we can get to work on time.

Especially when it is winter morning, it becomes so cumbersome to get out of the bed, doesn’t it? Daily, we have the same routine to go through – brushing the teeth, taking bath, and dressing up. Brushing, washing, bathing - how boring it becomes to do one and the same thing every day! Yet people spend an hour’s time in bathing. After spending so much of time, if one were to remain clean forever, it would have been a different matter. However, it doesn’t happen so! One then sprays deodorants, which make one stinks even more. One’s head starts reeling! Thus, this all is a bondage only – one’s mouth stinks, body stinks, everything stinks. What happiness does one get in this?

Eating? Oh! Doing so morning, afternoon and evening and then emptying it the next day (going to toilet) – it’s so very tiresome. Then, late night, when one gets late in returning home after enjoying a stroll, the wife is likely to whack and doubt the whereabouts. What a bondage! Also, when one has to study late night due to exam on the next day, or finish some important office work, one has to force oneself to stay awake and complete the task-at-hand. This, too, is a burden. On the other hand, when one keeps turning sides on bed throughout the night, it becomes so difficult to have a sound sleep.

Big losses in business, unable to find a job, back answers from children whom you have protected and sheltered through their childhood – all these events make us realize that life is indeed is a bondage; there is nothing to like in this world!

When the awareness that life is a bondage arises, that’s when we can call it spiritual readiness; we can understand that the thirst for liberation shall now begin.

King Padmottar was very desperate for liberation, just like a wife is for her husband when he is abroad. He would constantly ponder, “When can I break-free from this world; when will I take Diksha and go to Moksha?”.

Finally, he managed to convince his near and dear ones and took Diksha. Thereupon, he did vees sthanak tap and acquired the Tirthankara-naam-gotra-karma.

After completing the lifespan, the Soul of the King reincarnated in the tenth dimension of heaven. He spent a long life there. With the right vision (Samkit), although externally there were bountiful pleasures in the heaven, internally he was totally detached from the material happiness. The awareness remained focused all the time on the Soul alone.

The Last Birth as a Tirthankara Bhagwan Sheetalnath Swami

After completing the lifespan in the tenth dimension of heaven, the Soul of King Padmottar descended into the womb of Queen Nanda, the wife of King Dridhratha, in Bhaddilpur nagri in India in Bharat Kshetra.

One day, during the pregnancy of the Queen, King Dridhratha had a high fever. As a result, he experienced an acute burning sensation in his body. Just then, Queen Nanda touched her husband. With this touch, the King got an instant relief. Immediately, the burning sensation subsided, and his entire body temperature became normal. Due to this, on the birth of their son, the baby boy was named Sheetalnath.

His complexion was golden. After growing young, He got married. Later, He took Diksha and soon attained Keval-Gnan. Upon attaining Keval-Gnan, He started giving Deshna. Consequently, many people took Diksha from Him.

During the Deshna, the Tirthankaras talk about different topics. Sheetalnath Bhagwan, too, in His Deshna, gave people a beautiful understanding of the ‘Samvara bhavna’.

Samvara means to block the inflow of the new karmic matter. It means to come into that kind of awareness, which does not let you bind new karma. Samvara are of two types:

Dravya means gross or external, while Bhaav is subtle, internal. Thus, Dravya Samvara is to stop binding karma by way of doing certain external activities. To do something including to refrain from doing any external activity, ego is required. To decide to do or not to do something also calls for ego.

On the kramic path, an ego to do good karmas is brought forth vis-a-vis the ego to do bad karmas to help take an exit from the latter. Thus, by stopping bad karmas and binding good karmas, one gradually rises step-by-step on the path of spiritual development. While progressing so, the awareness of the Soul comes, which gives rise to Bhaav Samvara that does not allow binding any new karma.

Let’s understand Bhaav Samvara and Dravya Samvara with a help of an example. Suppose someone happens to have an excessive sexual urge arising within. However, that person has the understanding, “I do not want to give into these urges but want to adopt celibacy.” Based on this understanding, he decides to follow celibacy and finds out all the solutions to do so.

In the case of Dravya Samvara, one follows the external ways or solutions such as ‘Nav vaad’ or nine protections, which do not give the person any scope for sexual misconduct. These protections include not coming in the company of the opposite sex, going to upashray (to meet Guru), not viewing pictures of any opposite sex, not sitting where the person of the opposite sex has sat a while ago, not indulging in thoughts of those who belong to opposite sex, not staying where people enjoying worldly life dwell, and not remembering past events that trigger sexual thoughts.

Based on these external ways, one can stop the sexual urges through Dravya Samvara, and thereby, progresses on the path of brahmacharya. Gradually, one’s internal awareness blossoms. One day, when the person meets a Gnani (the Enlightened One), He helps him attain Bhed-Gnan that manifests his internal awareness fully.

Thereupon, he does purusharth (spiritual effort) and with parakram, destroys the tuber of sexual urge from its root. Only then does Bhaav Samvara happen; until then it does not occur.

Vis-a-vis anger, one practices forgiveness (it is an act opposite to anger) – this is called Dravya Samvara. In Bhaav Samvara, the virtue of forgiveness is fully established. One doesn’t have to forgive; everyone is naturally forgiven. The passion of anger does not arise at all. The popular example is of the episode where Lord Mahavir exhibits natural forgiveness for Chandakaushik serpent, who bit him hard to kill him.

Similarly, one adopts humbleness vis-a-vis the false pride (maan). So many Sadhus cultivate humbleness, and owing to this virtue, they are saved from false pride. This is Dravya Samvara. In Bhaav Samvara, no matter how much respect one derives, it doesn’t touch at all due to the prevailing awareness, “The one whom people are respecting I am not that entity at all. I am Pure Soul.” Hence, there is no need to avoid or change anything externally; the passion of pride does not arise at all.

Vis-a-vis greed, one becomes non-acquisitive by following the Dravya Samvara. In Bhaav Samvara, one does not have desire for anything in this world. Therefore, nothing touches internally. Irrespective of whether one has money, luxuries, cars, bungalows, etc. in abundance, one never feels that these things belong to him. One is always in the awareness of Soul, which is the wealthiest element. Hence the passion of greed does not arise at all.

Once, one seeker asked Param Pujya Dada Bhagwan, “Aren’t You like us only, Dada? What’s the difference between you and us?” Param Pujya Dada Bhagwan replied, “Your tiger-like karma is roaming around freely whereas my tiger-like karma is in the cage. Your tiger shall gulp you any day, whereas my tiger is always in my control.’ Such is the state of the Enlightened Ones!

Coming back to Sheetalnath Bhagwan, He had 81 Gandharas. He finally attained Nirvana from the Sammed Shikharji Mountain.