Is there something truly known as Soul? Does Soul exist in reality? The answer is, YES! If you see a person passing by, it is deemed that there is Soul inside. Why so? This is because a living being exists, as there is Soul inside that acts as the life energy. Without Soul, there is neither existence nor life! Soul is subtle due to which it cannot be seen. It can be fully experienced though. It is the source of infinite bliss!

Questioner: Does Soul exist or not, such doubt arises in mind. 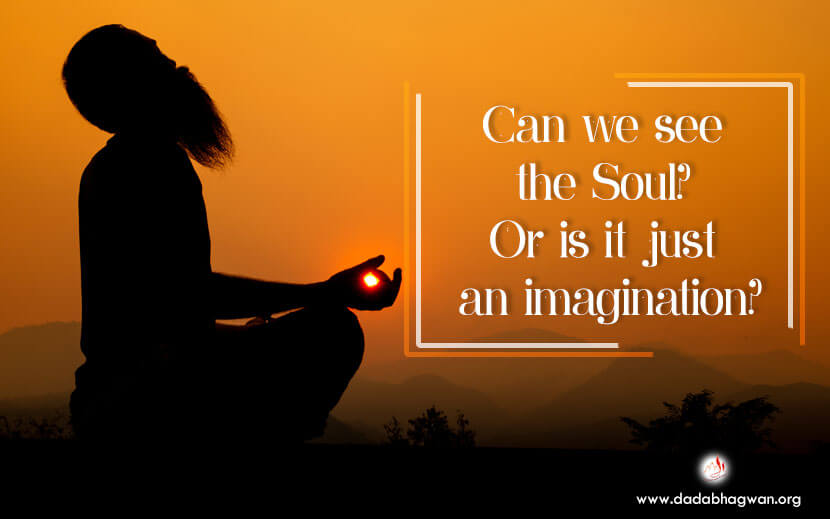 Questioner: Can we see the Soul? Or is it just an imagination?

Dadashri: You cannot see air, but you know this is air, isn’t it? Can you see the fragrance? But even then, you are convinced that it is perfume. This is how you can be convinced that there is Soul. Just as you recognize perfume by its fragrance; you can recognize the Soul from the Soul’s bliss; and then you will be able to see this world as it is.

Questioner: The Soul does not appear on an x-ray, nor can it be captured in photography or any other way.

Dadashri: Yes, the Soul is very subtle. Therefore, it is not palpable! It cannot be caught on camera, nor is it visible to the eyes. You cannot even see it through a microscope, binoculars or any other instrument. You cannot see it with anything; that is how subtle it is.

Questioner: So, I wonder where the Soul could be.

Dadashri: Even if Soul was surrounded by flames, the flames would not touch it; so subtle it is.

Questioner: But even when they cut the body or split it open, you still cannot see the Soul.

Dadashri: The Soul is not something that you can see! But does it not leave when the body is cut up? When a person dies, who is it that leaves?

Dadashri: Yes, it leaves, yet it is such that it cannot be seen. But it is there for sure. It is light; it is in the form of light. All this (the body that we can see alive) is its light! If it is not there, then everything would end. Have you seen the body once the Soul has gone out of it? Have you seen dead body? Does the body have light in it, then?

Dadashri: It means the Soul has left the body. The Soul is in the form of light.

Our Own ‘Self’ Is the Soul. You Are Really a Pure Soul. You Exist Because Your Soul Exist!

Those who doubt the existence of Soul are essentially proving the existence of their own Soul. The one who creates the doubt about Soul is indeed the living being itself. Is it possible for the non-living to have a doubt?

Questioner: The foreign scientists have done all kinds of research to determine whether or not there is a Soul. They’ve put a dying man in a glass case and have tried a lot to check how and from where the Soul leaves the body. But they could not figure out anything. Hence, they concluded that the Soul does not exist at all.

Questioner: No. What they meant was that there is no such thing as a Soul that leaves the body.

Dadashri: These scientists make ‘man’, they make new hearts, they make everything, don’t they? So, if they make a new man, will that man be able to interact the way we do?

Questioner: No, he would not.

Dadashri: So then on what basis can they say that there is no such thing as Soul?

Questioner: They just placed a dying man in a glass case. But when the Soul was leaving, they did not see anything; so, they concluded that there is no such thing as Soul.

Dadashri: Those doubting whether there is a Soul or not are Souls themselves! The one that doubts is a living being, or else he would not have doubts! None of these other non-living things will have doubt. If there is any doubting going on, it is the Soul that does it; there is no other thing that can have doubts. Do you understand this? Will the person have doubt after he dies? No, then what is it that leaves?

Questioner: A person dies when the essential body parts stop functioning. If that is true, then there is no such thing as an embodied Soul.

Dadashri: There is such a thing as Soul! A person himself is a Soul, yet he has doubts about his own Self. The one having the doubt is the Soul itself. The one who has the doubt about there not being life in the body, is himself the living being. There is no tongue in the mouth, and hence one says, ‘I do not have a tongue in my mouth.’ (But he spoke), that itself proves that there is a tongue in his mouth. Do you understand? That is why the statement that there is doubt is a contradiction. People say that when a man dies, there is no such thing as the Soul that leaves! The word itself raises doubt; a person has doubt. The doubt itself proves that there is Soul there. If I sat down with the scientists, I would explain to them right away that it is the living being that is speaking. You also are raising a new kind of doubt? So, there is definitely Soul in every living being!

The Soul Has Always Existed and Will Continue to Do So Forever!

In reality, you are a Soul. Have you not heard people saying, “I must have done some bad deeds in past life?” This proves that we existed in our past lives. Rebirth is a proof that Soul exists; it was, is and shall always remain.

The Experience of the Soul Is What Is Missing…

It is due to the ignorance of our real Self that we suspect the existence of the Soul and keep finding an answer to the query, “Does Soul exist?” Once we experience it, no doubt shall remain then. So, what we really need to know is, “Who am I?”. When this knowledge is bestowed upon us by a Living Gnani Purush, the experience of the Self begins. Thereafter, the awareness that ‘I am a Pure Soul’ exists naturally. It is there even when we wake up in the middle of the night.

Thus, the goal of human life is to get the Soul awakened (attain Self-Realization, i.e., establish a firm conviction of ‘I am a Pure Soul’), come into the nature of the Self (attain awareness of the Soul) and remain only in the Self (experience the Soul).