Food plays an important role in the practice of brahmacharya and in maintaining awareness of it. When food enters the stomach, it is converted into a form of alcohol and then you feel lethargic the rest of the day. There is a tremendous effect of food on one’s awareness. If one wants to live a life of celibacy and if he eats excessively, it will have an effect on his ability to practice celibacy. Then he has to endure the outcome of those adverse effects.

Param Pujya Dadashri has unfolded the science behind maintaining a brahmacharya diet to help in the practice of brahmacharya. By following these unique brahmacharya tips (celibacy tips) related to food, one can sustain their sexual purity and celibacy.

Those who want to practice brahmacharya must be aware that sexual impulses increase with certain foods. These types of foods should be decreased in order to maintain a brahmacharya diet. 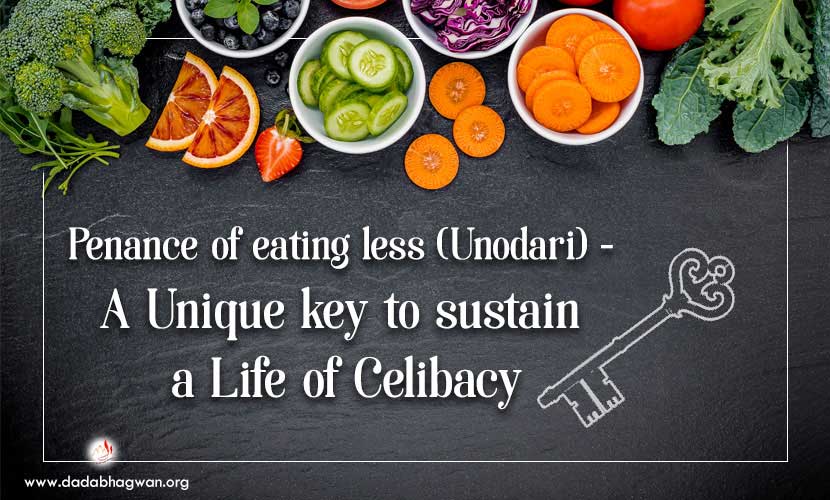 Param Pujya Dadashri explains how eating less helps you maintain your awakened awareness to sustain your sexual purity and practice of brahmacharya:

What is the penance of eating less? It means that if you normally eat four chapattis everyday, then start by eating only two. That is called the penance of staying hungry by eating less. It is so because the Atma (Self) is not the eater, this pudgal (physical body; non-Self) is, and if the body becomes like a buffalo, if the energy of the pudgal increases; it will weaken the Atma.

Questioner: Whenever I feel like doing penance of eating less (unodari), I end up eating more.

Dadashri: Unodari (eating less) should be practiced constantly. Gnan-awakened awareness will not be maintained without unodari. Food itself is alcohol. Food turns into alcohol after you eat and then the intoxication of that alcohol remains the whole day and thus one loses his awakened awareness.

Questioner: How much connection there is between unodari and celibacy?

Dadashri: Greater awareness is maintained with unodari. It will sustain celibacy, will it not? Practice of unodari is better than fasting, but you should have the inner intent that ‘I should practice unodari’, and chew your food a lot before you swallow. You should eat at half the speed of what others eat. So it will take the same time, but you will eat less. You will feel that you have had enough to eat and in addition to that you will acquire the benefit of eating less. You will benefit greatly by taking a long time to eat.

Dadashri: Yes, when one is alone, he will snack on things. That is the very thing that needs to be seen. One should come to such a state that no matter how much food is in front, he will not touch it, even if he is alone. That is how it should be. He should eat at meal time and then nothing in between. There is no point of eating at times other than meal times; it is all meaningless. Even the tongue will become disobedient. Then what is left? It will lead to ruination! ‘We’ do not touch a thing even if it is lying in front of us. If you touch the food or put it in your mouth, then you will automatically start eating the rest of it. Even if you just touch the food! You simply have to decide that you do not want to touch it; then things will run smoothly. Otherwise, the nature of the pudgal (non-Self) is such that, if you are late in being served some rice, it will start sticking its hand in the vegetables, the lentil soup and keep licking and eating. One will keep stuffing himself as if his body is a mill.

Impact of Fasting in the Practice of Brahmacharya

What happens during fasting? All the garbage that has settled in the body is burnt away. The day of fasting, if there is restriction on one’s speech, then his garbage of speech gets burnt and the mind does wonderful pratikraman and all other good things during the day and so all other garbage also continues to burn. Hence, fasting is very useful. One should fast at least once a week; mainly on Sundays. Do not fast two days in a row, otherwise you will start some other problems. You experience great joy the day you fast.

Questioner: There is a different kind of happiness in the night, on the day I fast. What is the reason for this?

When the force of sexual impulses is very strong, fasting can put a stop to it.