What is semen (virya)?

The essence of the worldly life is moksha and the essence of the body is semen (virya). All the things in the world by nature, are diminishing. Semen is the only one that will rise (urdhvagami) if you want it to. Therefore, the seeds of intent (causes) for the energy of the semen to rise towards spirituality and ultimately the Self, should be sown. 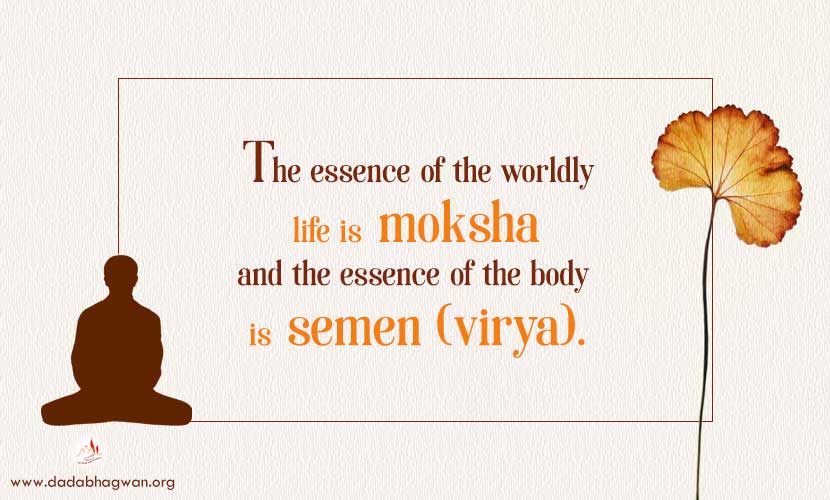 Param Pujya Dadashri has explained what semen (virya) is, let us have a look:

Dadashri: What happens in the stomach to all that you eat and drink?

Questioner: It is converted into blood.

Dadashri: What happens to that blood?

Questioner: The blood is converted into semen.

Dadashri: Really! Do you understand what semen is? The blood is converted into semen and then what happens to that semen? Do they not talk about seven elements of the blood? From one of these elements bone is formed, from the second flesh is formed, and so on until the last of all to be formed is semen. Semen is the essence of the body. Just as clarified butter, ghee is the extract of milk; the essence of food is semen.

Why does semen (virya) get discharged?

All matter of extract will eventually discharge; it will not remain within. If you get involved in a sexual impulse, then the stock of semen from within will exhaust, it will drop and go down. It will accumulate there and then discharge quickly. But if that thought, which arose as a result of the sexual impulse is uprooted and thrown away as soon as it comes, then the semen will not exhaust and therefore will not go down. It will rise to a higher level in the spiritual realm. There is tremendous science happening within.

The effects of karma, brought forth from the past life, are bound to discharge. Sexual thoughts will arise. Any encouragement given to it, renders the semen virtually lifeless and then somehow or another it will find its way out in order to discharge.

Param Pujya Dadashri explains the science of the discharge of semen here:

Questioner: Is the discharge of semen part of the nature of the non-self (pudgal) or is it because there is some leakage of ours, somewhere?

Dadashri: When you look at someone in a sensual way, a certain amount of semen becomes ‘exhausted’.

Questioner: That also happens with thoughts.

Dadashri: It becomes ‘exhausted’ through sexual thoughts, it even ‘exhausts’ through a sexual look. The stock, that has been ‘exhausted’, then discharges.

Questioner: But those who practice brahmacharya do not have those circumstances. They stay away from women, they do not keep pictures or calendars of women and yet their discharge occurs. Isn’t this a natural process?

Dadashri: Even then, he can imagine sex in his mind. Secondly, if he eats too much and if too much semen is being produced from it, then it is possible for it to flow out.

Questioner: If one eats too much at night, that is the end of that….

Dadashri: One should not eat a lot at night; eat more in the afternoon if you want to. One cannot stop semen from discharging if one eats a lot at night.

Who does not have accidents of semen leaking out? A person, whose semen becomes very strong; whose semen has become very thick, would not leak out. Others have semen that has become thin.

Questioner: Can the flow of semen be stopped through the power of the mind?

What is the nature of semen (veerya)?

It is not in the nature of semen to flow downwards and dissipate. It drains because of one’s lack of resolve. Once a firm decision is made, it changes its direction and thereafter, the aura and glow on one’s face will be apparent to all. If a practitioner of brahmacharya does not have this aura and glow on his face, then his brahmacharya is incomplete and it has yet to be attained.

What are the characteristics of someone whose semen energy is rising?