Who are Durga Devi and Ambe Maa? 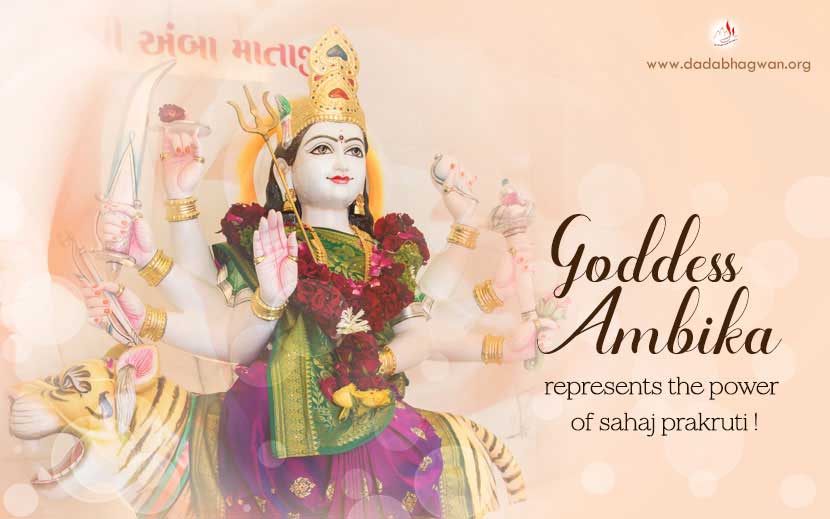 Goddess Ambika is adhya shakti i.e. the original energy force. She has the divine power to destroy your worldly obstacles and grant energy to your worldly self (prakruti), thus helping it become natural.

Goddess Ambika enables your prakruti to become natural and spontaneous (sahaj). When your personality remains and behaves in a natural state, then it is referred to as sahaj prakruti.

How do we please Ambe Maa?

Ambe Maa gets pleased when she sees us trying our best to abide by her rules!

Do you know that the enlightened Ones (Gnanis) always abide by every rule of all the celestial Gods and Goddesses (Dev and Devis)?

Gnanis never break or violate any of their rules, and He gives them their due respect, by consulting with them before taking any important steps. That is the reason the three Goddesses i.e. Goddess Ambika, Goddess Saraswati and Goddess Lakshmi always remain pleased with the Gnani, giving Him immense protection by being present around Him all the time. The grace of all the celestial Gods constantly flows upon the Gnani and they are always with Him, providing endless support in the work for the salvation of the world!

If you choose to abide by their laws, the Goddesses will be pleased with you as well.

Dadashri: Each Devi has her own rules and they will be pleased if you abide by those rules. ‘We—Gnani Purush' are Ambe Mata’s one and only son. If you were to take a message or a note from ‘us’ to her, she would grant you a favor. If you have a son and a servant, and if that servant remains loyal to you and abides by your every rule, would he not be dear to you? He would be. ‘We’ have never broken or violated any rules of Devi Ambikama, Devi Saraswati and Devi Lakshmi. ‘We’ always abide by their rules. That is why all the three Goddesses are constantly pleased with ‘us’. If you want to please them you too should abide by their laws.

Questioner: What are Amba Mataji’s rules? In my home everyone worships her, but we do not know her rules.

Dadashri: What does Goddess Ambikama stand for? She represents natural prakruti so how can she be pleased with you if you break the natural state of prakruti? She is the entire prakruti herself.

Questioner: On what basis these established idols of Devis might be giving the fruits?

Dadashri: Devi is a center (pivotal focus of and for relative energy). The fruits that you reap are directly proportional to your faith (shraddha).

Questioner: When suffering of pain and misery is there in unfolding karma effects of this life and at that time if we worship and do prayers to Mataji, then can she get rid of the miseries?

Dadashri: You can have peace (shanti) by worshipping Mataji, and your prakruti can become natural. This is a body, it is a prakruti. It is in the form of energy. Mataji is in the form of energy. She is an embodiment of energy (avatar) so when unity of mind speech and body energy happens (ekagrata), you can attain that energy. That energy is verily within you. But why do we have to keep these symbolic idols? This is because people are not aware that the energy is within them, that is the reason why it has to be placed outside as symbols.

By worshipping Mataji, Shakti, Devi, Ambika Mataji, Kalika Mataji, Durga Mataji, the prakruti remains good and natural. All this is there to cleanse the prakruti.

Thus, by worshipping the Goddess Ambe Maa with reverence and with exuberance, our prakruti becomes natural, powerful and is energized.