How can we get Spiritual Enlightenment according to the Shrimad Bhagwat Geeta?

Only a Gnani can make you Brahmanishtha

The Self, the real ‘You’ is the Supreme Soul (parmatma), but until one attains that state, he says, “I am a Vaishnav or I am a Jain.” Then a Vaishnav holds Krishna in his heart, and until he attains the main thing, the Self, all that holding is his devotion (dharna). The real and the main thing is the Self within. The connection with the Self is called the Brahma sambandha or Self-realization. What is brahmasambandha? A yearning that arises and never ceases is brahmasambandha; that which binds a union with the Self is brahmasambandha. Gnani Purush removes your devotion to the world and places that devotion into the Self (Brahma) and makes you brahmanishtha (established as the Self). Here in the Gnan Vidhi, the Self and the non-self are separated according to their intrinsic properties. For countless lives the Self and the non-self have become one through delusion. When the Gnani Purush destroys the demerit deeds (paaps), the awareness of the Self takes hold. How else can that awareness (laksha) remain? If someone asks you, “What is your religion?” just tell them, “My religion is the religion of the Self (swa-dharma).” The Soul is the Self (swa) and only after knowing the Self does the religion of the Self begin. 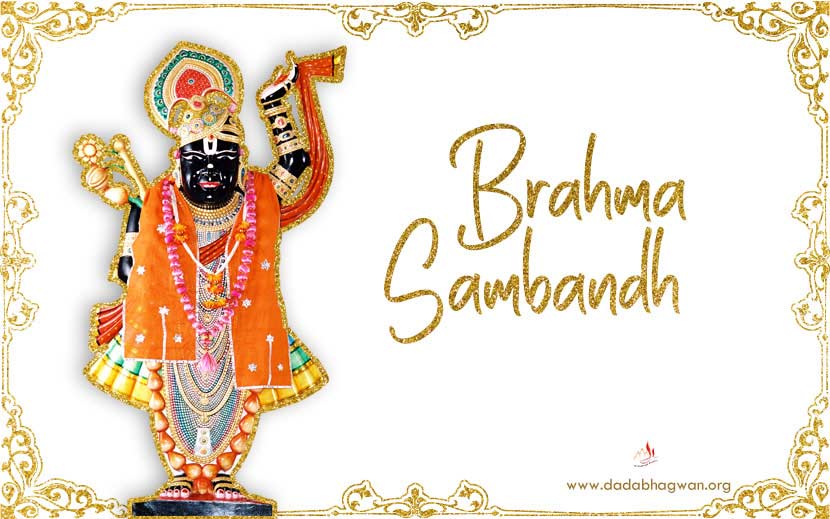 When one comes to know the Jina (the one who has conquered all passions), then you become a Jain, otherwise Jainism is an inherited religion and so is Vaishnavism. But anyone who listens to ‘our’ speech for one hour is a true Jain and a true Vaishnav.

Despite having lived so many lives, ultimately there is nothing but betrayal from life. Therefore, create a union with the Self (brahmasambandha) through ‘us’, because no one else will support you; accompany you at the time of death. This worldly life is nothing but a total betrayal! So tie a bond with ‘us’; that is called union with the Lord (brahmasambandha) and this union is such that no one will be able to get rid of it even if they want to. The world is a place of betrayal and widowhood; it is a museum of miseries. How can you see happiness in it? It appears good because of delusion. You will find the world a very bitter place once the delusion clears. It does not seem bitter because of your attachment (moha) for it.

Make a connection with ‘us’ and you will be blessed. This body that you see before you is just a bubble but within it is ‘Dada Bhagwan’ (the Supreme Lord), so get your work done. This manifestation has taken place after a million years. You will attain moksha even as you live the worldly life. You will not be able to do darshan of ‘Dada Bhagwan’ after this bubble bursts, so do your darshan before it bursts. Brahma-sambandha means to make a connection with the Lord within, at the feet of the One within whom Brahma (the Omniscient Lord) has manifested. Very rarely will you find someone to connect you with the Lord in this manner.

A million years ago, religions had become disorganized; they were thrown in a state of confusion and chaos. From that point, in a place called Kesariyaji, the first and the main Lord of all the religions was ‘Dada Bhagwan Rushabhdev’. Now after a million years, this ‘Dada Bhagwan’ has come, so do His darshan and get your work done. The Lord Himself has come directly and this body is His temple. So before this temple dissolves, do the darshan of Dada Bhagwan sitting within. Make such a connection with Him that you start to see the Self everywhere; in the trees, in the leaves, animals-in everything. You will not get anywhere if you make a weak connection, so make sure that your connection is strong.

“Completely separate from the mind, body and speech; I am the pure Soul with the connection to the Supreme Soul.”

This mantra will sustain your state of the Self, while improving interactions of worldly life. Thus it will also preserve and protect you from slipping into negative worldly interactions. This mantra sustains the Self and increases the connection with the Self. A yearning to be with the Gnani Purush is Brahmasambandha. You have been friends with maya (deceit; illusion) for so many lives that it will come back even if you were to get rid of it. However, with the establishment of Brahmasambandha this illusion, maya will leave forever.

Never allow yourself to be drawn in the market place of moha (attachment). Weddings are a market place for maya (illusion) and moha (attachment). Maya and her ‘children’ (anger, pride, deceit and greed) will ruin your reputation and the Self will preserve it. Nothing can touch you if you are under ‘our’ protection. Nobody will harass you if you have friends in influential places; they will fear your connections. Similarly, now that you have made an acquaintance with ‘Dada Bhagwan’, who is the Lord of the fourteen worlds, who would dare bother you?

Mention my name and take my ‘key’ wherever you go and then even ‘Ranchhodji’ (Lord Krishna) will talk to you.

Kaviraj has sung for Dadashri:

I verily am the heart of Sri Krishna And the Original Singer of the Gita.’

‘Through the sounds of the flute, the Jamuna bows, because the Light of Lord Krishna is here now.’

‘A true is one who knows the pain and suffering of a fellow human being.’

There is not a single Vaishnav to be found who fits the definition of this bhajan. Everyone talks about not hurting anyone. This is a good boundary. Having such a boundary is the beginning of religion. Whereas here; people clash all day long. What is the true definition of agiyaras (the relative definition is fasting on the eleventh day of a fortnight of Hindu lunar month)? It is when you keep a control over your five organs of actions (karmindriya), the five senses (gnanendriya) and the eleventh being the mind; it is when you keep a control over all these eleven instruments of actions for one day. But while fasting, on the eleventh day a woman will quarrel with her husband, "You did not bring this and you did not bring that." How can you say she observed the agiyaras? Dharma or religion cannot be attained through such agiyarases. If once you do one agiyaras according to 'our' agna, you will not have to do another.