What is the difference between Meditation and Religion (dharma)? And what is true religion ?

What is the definition of dharma (religion)? 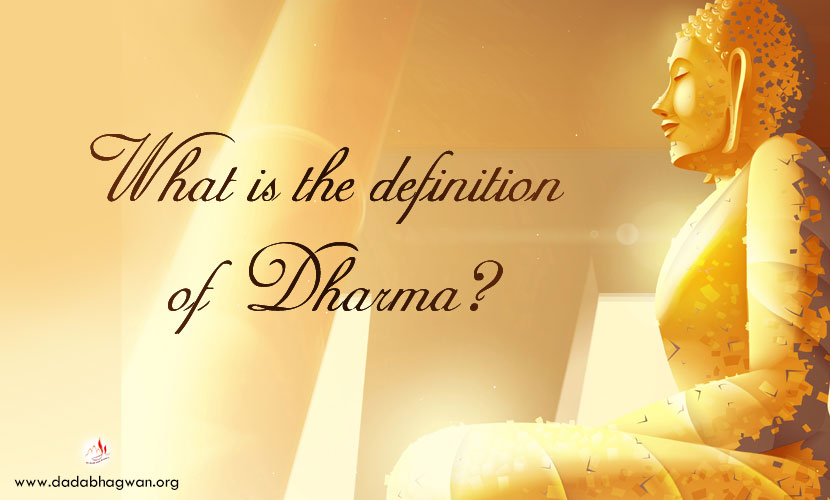 That which reverts to its original nature (dharma) and then brings forth the result, is called religion. That means it takes hold within and decreases the kashaya (anger, pride, deceit and greed) within.

The nature of anger, pride, deceit and greed (kashaya bhaav) is such that they will not decrease. Rather, they keep increasing within. They will not decrease by one's own efforts. They will decrease through religion (dharma) as defined above. Where will one attain such a religion? From a Gnani Purush. It should be a religion certified by the Gnani. Thereafter, use of just two words of the Gnani Purush, words that are laden with the energy that brings exact results (vachanbad), words that awaken and maintain awakened awareness (jagruti), will shatter the veils of ignorance to release tremendous energies from within.

That which brings forth results is religion (dharma). That which does not bring forth a result is not religion (adharma).

What is the result? Religion decreases one's kashays. They become lighter, lesser and ultimately they leave. As they decrease and lessen, one's inner energy and bliss increases. One becomes aware of the amazing inner energies that express. Where did all these energies come from? That is dharma (religion). If not, the spinning toy (term Dadashri uses for the plight of the human being who enters one life after the other by creating karmas through ignorance, the analogy being the spinning top which stops spinning at death) remains the same until the time of death (nanami). How can one call that religion?

What does it mean 'to become the religion and then bring forth result'? What result is to be expected? Is it to learn how to take a vow, discipline, penance? No, none of these. It means to be rid of anger, pride, illusionary attachment, deceit and greed (kashays). To be rid of these kashays is called dharma (religion). Then some say, what about these daily introspective periods (samayiks), meditation sessions (dhyan), listening to discourses (pravachans)? Is that not religion? The Lord says, no that is not religion. The Lord advises you to ask these teachers of religion if they experience kashays with their disciples. The master will then reply that none of the disciples follow their instructions to do samayik and therefore they get very upset from within. Now, is that dharma? Are they following religion? No, on the contrary they are only increasing the kashays.

Religion does not exist in samayiks (introspection) etc. Religion exists in the expression of meaningful results. Religion means that which eradicate kashays and their intents. These kashaya bhaavs cannot be killed even if one tries to; they cannot be peeled away no matter how much one tries to do so. They are very resistant to eradication.

When the religion attains its final and full result, then one becomes the embodiment of religion (dharma swaroop).

There are two types of dharma: relative and real.

When the mind is involved in its dharma, the mind may have good thoughts or bad thoughts but nonetheless, it is in its own dharma. When thoughts are good, one says, "My thoughts are good," because of the illusion (bhranti). Here one becomes one with the thoughts (tanmayakar). When thoughts are negative, he remains separate from the thoughts saying, "I have these terrible thoughts even when I do not want to." The function (dharma) of each component of the antah-karan (the internal functioning mechanism in every human being composed of the mind, the intellect, chit and ego) is separate. The function of the mind is separate, function of the chit is separate, function of the intellect is separate and function of the ego is separate. But one interferes in their functioning and creates a mess! To become one with thoughts is the illusion. When interference of becoming the owner of the thought ceases? It is when the Gnani Purush bestows the knowledge of the Soul; the knowledge of one's real Self, one ceases to become one with everything that takes place within and without. As the Self, one becomes impartial. Then there will be no support for the mind, the chit, the intellect, the ego or the body. You become one with them because of the false projection (aropit bhaav) 'I am the body'. Once you attain the Self, you remain separate as the knower and the seer.