What are the reasons for divorce?

In our everyday lives differences occur. The source of such differences arise from a difference in opinion of how things or people are or should be. Invariably these result in clashes, conflicts, discord, lack of understanding which leads to inner separation and ultimately in divorce. 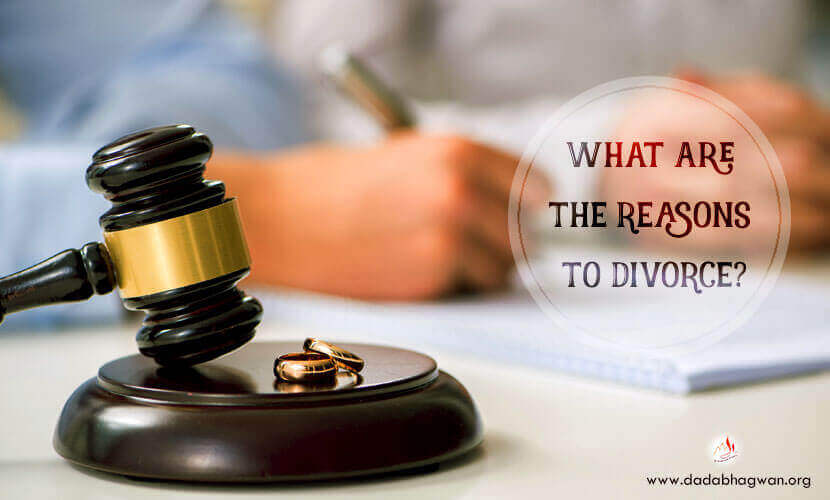 Let us understand each of the reasons for divorce as per Param Pujya Dadashri’s vision:

Which family in India does not have quarrels at home? So many times, I have had to make both of them understand over and over again, and bring about a resolution. They are almost getting ready for a divorce. So many people are in such a situation! But, what can they do? There is no way out! A drift is caused because of lack of understanding, and one does not let go of his insistence, and all the discussions are filled with lack of understanding. Then, when I make them understand this, they say, “No.” Then they say, “It’s not like that, it’s not like that.”

Questioner: Although they appear to live together, they are actually living as if they are separated.

Questioner: You have brought everyone together.

Dadashri: Do you have differences of opinions with your wife?

Dadashri: Even with your wife? If you cannot be united with her, then with whom can you be? Unity means never having differences of opinions. Your wife is the one person with whom you must vow never to have any differences. That is how united you should be. Do you have such a unity?

Questioner: I have never thought about it this way before. This is the first time I am thinking this way.

Dadashri: Yes, you will have to think, will you not? Do you know how much thinking Lord (Mahavira) did before his final liberation? Do you like having differences?

Dadashri: Differences of opinions lead to fights and worries. If that happens because of differences in opinions then imagine what would happen if there are differences amongst the minds? When that happens, divorces take place and when there is a difference with the body, death will occur.

Dadashri: Do you like differences of opinions? When there are differences in opinions, it will create discord. Excess discord results in a divorce.

Questioner: From the perspective of daily living, are our conflicts due to differences of opinions or differences in our thinking?

Questioner: Is it better to have a lesser difference of opinion?

How can you accept this discord at home? When the wife says, “I am yours,” and the husband says, “I am yours,” where is there room for any discord? As problems between the two of you increase, a separation between you will begin. There is pain in separation. Everyone has problems, not just you. Anyone who gets married will have such problems. But after these problems are solved, you will not feel a mental separation. Any sense of separation causes pain and in most cases, this is one of the major reasons for divorce.

To find practical solutions to resolve conflicts in your marriage click here.


1) Problem does not lie in being a husband; the problem is with acting as a husband (being bossy).

2) Difference of opinion is a clash, and to clash is a 'weakness'.

3) When one says, 'my opinion', it creates a veil. Due to the veils of his opinions, one does not understand the opinions of other people, and so there he keeps on talking ill things only.