Questioner: There are certain rituals people are made to practice in the last hour of their life. Some Lamas are made to carry out certain activities in the last hour of their life. The Tibetans Lamas say that when a person is on his deathbed, they tell the soul of the dying person how to depart. Some people recite from the Gita so that good words are spoken to the dying in his final hour. Do these rituals have any effect? 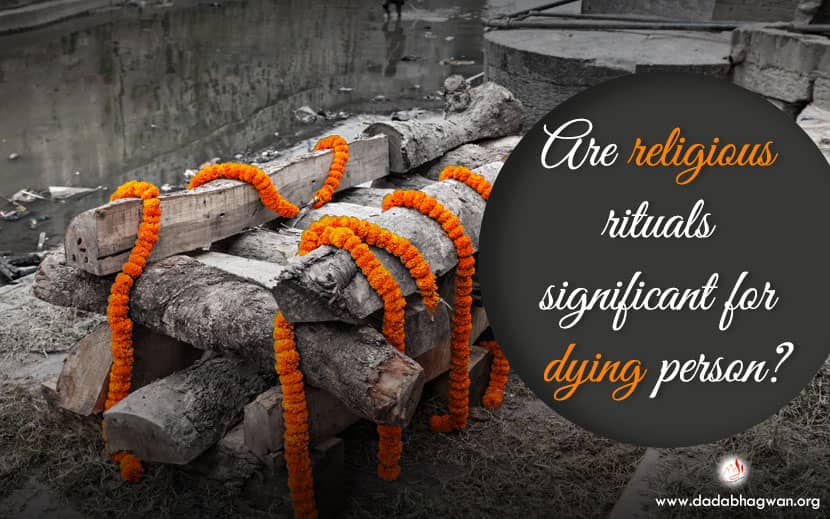 Dadashri: No, such last minute rituals achieve nothing. Is it possible for one to make up for all the losses one incurs during the course of the entire year by simply making a profit at the end of the year?

Questioner: No, it will not work.

Questioner: The balance sheet will reflect all the transactions for the entire year.

Dadashri: In the same token, it is the end sum of all the activities of one's entire life that is brought forward. In performing these rituals, people are deceiving the dying and all around him. They are making fools out of them by giving false promises.

Questioner: Dada, when a person is on his deathbed and at the end of his life, he is conscious and if at that time someone recites the Gita or any other religious scriptures in his ears ……

Dadashri: It should be done only at the request of the dying. One can read to him only if he wishes to listen.


Questioner: So are all the religious rituals carried out during the time of someone's death right or wrong?

Dadashri: Nothing about these rituals is right. Those who are gone are gone. People do these rituals without much thought. When asked to do something that is meaningful for their spiritual progress, they would complain about lack of time. They would refuse to do this for the sake of their deceased parents. However, because of societal pressures they do all these rituals grudgingly.