Should one give Charity with Black money?

Questioner: Many people say that by giving charity, one becomes a deva (celestial being). Is that true?

Dadashri: There are people who, despite giving charity, go to hell. That is because they give under pressure, they do not give willingly. In this current time cycle, people do not have the kind of money needed to make a true donation. The wealth of the current time cycle is from dreadful deeds, and so donations made with this money, on the contrary, causes more harm. Nevertheless, it is still better to give to a needy person than give just for the sake of giving. What is the use of giving for fame and prestige? Feed and clothe the people in need. In this time cycle, where will you find honest money for donations? Here, it would be better to improve your thoughts than to give charity. Where can one acquire honest wealth when there is none? Whatever honest wealth there is, does not last. Today, large donations are made with ‘black’ money. Nevertheless, even though the money is illicit, it is not considered wrong because, although the donor acquired it through illicit means, he is donating it towards a good cause. This frees him from his sins. Whatever he sows, he will reap! At least, he will reap some fruits for the seeds he sows! 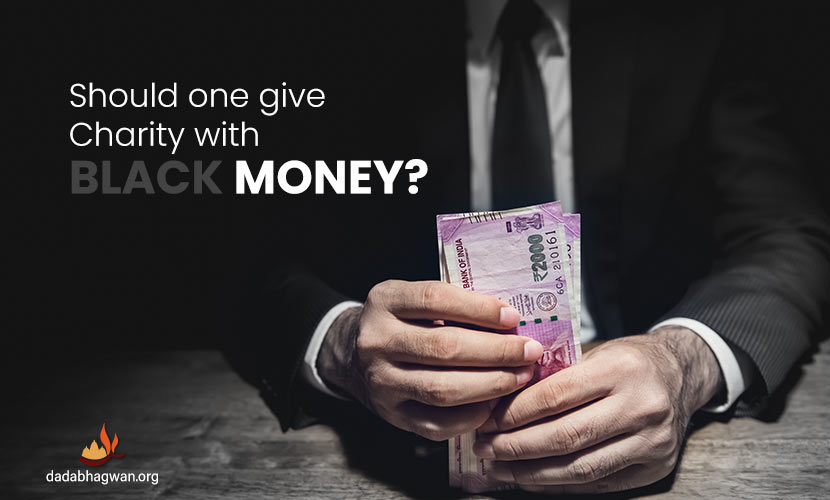 Questioner: There is a verse in a spiritual song, “A smuggler tries to free himself through a token donation given as a cover up.” On the one hand, he smuggles goods and on the other, he gives to charity. Will he gain any benefits?

Dadashri: No, he will not gain anything and in fact that is a sign of going to hell. Those are considered thieving tendencies. It would be better for a smuggler to live an honest life and give nothing to charity, than to smuggle and give a token donation. What is the point in taking a prisoner out to a park just for one day when he is serving a life long sentence?

The smugglers and the black-marketers give large donations to protect their reputation. This is called ‘token donation.’

Questioner: So are there no virtuous people today?

Dadashri: You cannot expect to find a completely virtuous person! Those who make millions of rupees and give a donation of a hundred thousand rupees, do so to preserve their reputation. Token donations only take place in this time cycle. It is very important to understand this. Others who give charity are simple family people with moderate incomes. There is nothing wrong with such people making donations. But those who give such token donations do so to protect their name. They give for their false image.

Besides, are the donations nowadays, given or are they taken away? And what is more, the money that is donated is money acquired through smuggling.

Questioner: Is it not acceptable to give donations of black money?

Dadashri: No, it is not acceptable. But if that black money is used to feed the hungry, then at least someone gets to eat. With such money, there will be certain legal implications, but not in any other circumstances. If that money were used to pay a bill at a restaurant, would it not be accepted?

Dadashri: Yes, that is how everything starts.

Dadashri: Definitely! At least they are giving up that much of their money! Their punya will depend on their intentions behind their donation! It is not just the donation that is taken into consideration. There is no question about their sacrifice of the money, but it is where that money came from and what their intentions are behind giving it, that is taken into consideration and calculated accordingly. Their intention may be that they might as well give to charity rather than have the government take it from them.


1) That there is a vast science behind the binding of karma - to read more about it, click here.

2) You can learn more about how to run a business ethically or how to deal with money here.