Who are you really?

From time immemorial, we have believed ourselves to be the body that we have been given. Because of that we get affected by whatever happens to the body. As a result, we become happy or sad. We wander around trying to make happiness last and try to run away from unhappiness. In this frenzy, we bind infinite good and bad karmas and thus live out the rest of our life. In our next life when we reap the seeds of karma then the questions arise, ‘Why is this happening to me?’ Just like this we have gone through infinite lives and yet we have not been able to find a solution to this worldly life.

The principle is that whatever you believe belongs to you, you will be affected by it. Whatever you believe does not belong to you, will not affect you. From the time you believe the body to be yours, you are bound and when you recognize it as foreign then you are free. 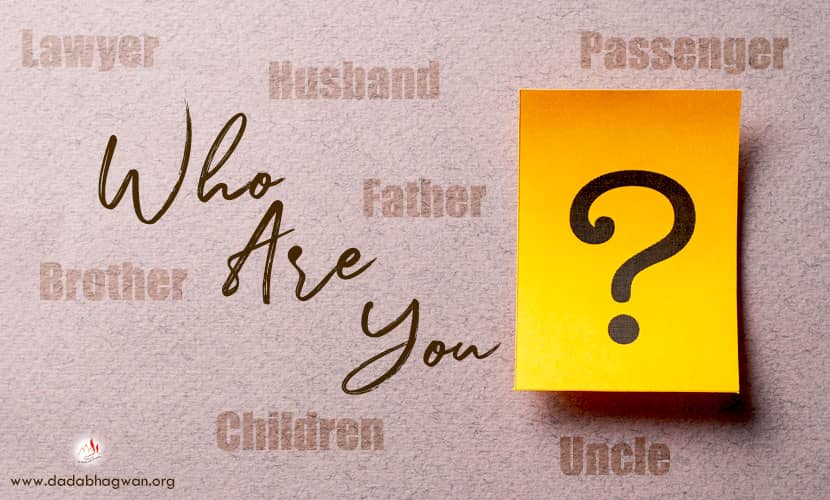 So if you are not this body then who are you and how do you know who you are?

For that, have a look at what Param Pujya Dada Bhagwan says about “Who are you really”.

Dadashri : Who Are You?

Questioner : I am John.

Dadashri : What is your name?

Questioner : My name is John.

Dadashri : Do you see a contradiction in the statements ‘I am John’ and ‘My name is John’? How can the name and the entity it belongs to, be one and the same? When a person dies, his name is taken away from him during his funeral rites, is it not? It is even removed from the census records.

Questioner : They are mine.

Dadashri : They are all parts of this body. What is yours in all that? Who does the mind within you belong to?

Questioner : It is mine.

Dadashri : What about speech?

Questioner : It is mine.

Dadashri : Whose body is this?

Questioner : That is mine too.

Dadashri : When you say, ‘it is mine’, does it not occur to you that the owner of these body parts is separate from the body?

Dadashri : Then have you ever wondered who you really are?

Science behind “Who are you”

Will you not have to investigate who you really are? For how long can you go on being in the dark, unaware of your real Self? Do you not think it is ignorance to not investigate your true identity? Only when you realize the answer to the question "Who are you?" does your wrong belief stop. It is because of this wrong belief that you have been wandering from one life to another. You do not know your true identity and furthermore you impress upon yourself, the belief of that which you are not. You have imposed this wrong belief on your Real Self.

Dadashri: The belief of, “I am John,” does not diminish, even in your sleep. And when you get married, people say to you, “You are this woman’s husband,” and therefore, you accept the role of a husband, and act like one. After that, through repetition, you keep reiterating the notion of being a husband. Is anyone a husband forever? If you get divorced will you still be her husband? All these false beliefs have become deeply ingrained within you.

This [belief of] ‘I am Chandubhai’ is egoism (ahamkaar). This is because to falsely claim ‘I am’ when one is in fact not that, that is called egoism.

[To say] ‘You are Chandubhai’ is for a ‘dramatic’ purpose only [for playing your role in worldly interactions]. So there is no problem with saying, “I am Chandubhai,” but the belief that ‘I am Chandubhai’ should not set in.

Questioner: Yes, otherwise the state of the ‘I’ will have taken hold [in the wrong place].

In order to get rid of your wrong beliefs, you need to understand the difference between ‘I’ and ‘My.’ You can find out the exact demarcation between the two by reading, “Scientific understanding of 'Who am I?' ‘I’ and ‘My’ Are Separate”

*John = Whenever Dadashri uses the name 'John' or the name of the person Dadashri is addressing, the reader should insert his or her name for exact understanding.