What is the Scientific Understanding of 'Who am I?' Know Yourself

Do you know yourself?

So indirectly, we say that we are this body.

Have you ever Googled it?

Before you search anymore, read this conversation between Param Pujya Dadashri and a German couple Susan and Lloyd: 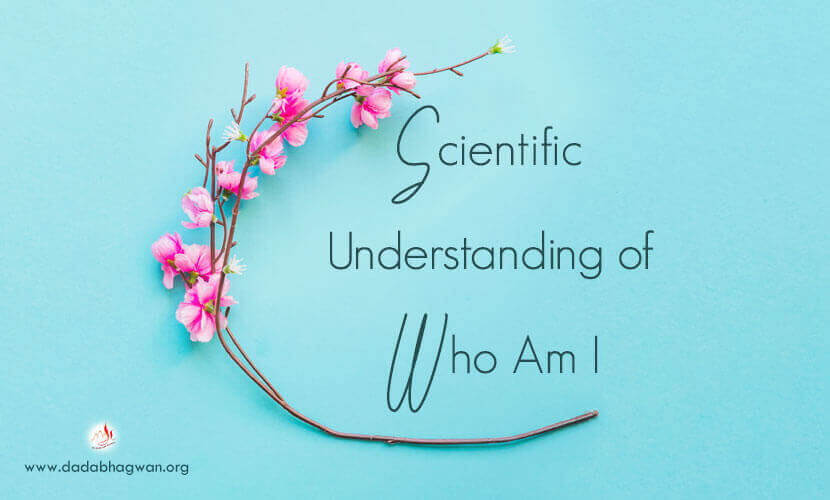 Param Pujya Dadashri asked them, “Would you like to be immersed in ‘I’ or ‘My’? There are ponds of this ‘I’ and ‘My’. Those who have been immersed in the pond of ‘I’ have never died, while those who are immersed in the pond of ‘My’ have never lived.” So they said, “We want it to be such, that we will never have to die again.” So I explained, “There is no worry in ‘I’. Don’t worry for ‘My’. ‘I’ is immortal, ‘My’ is mortal.” Therefore, separate ‘I’ and ‘My’! Within just half an hour they understood this and they were delighted.”

This will have confused you more, right? Okay, so let us simplify it a bit by looking at Param Pujya Dadashri’s live conversation with a spiritual seeker.

Dadashri: What is your name?

Questioner: My name is 'John'.

Dadashri: Are you really 'John'?

Dadashri: 'John' is your name. Is 'John' not your name? Are you yourself 'John' or is your name 'John'?

Questioner: It is my name.

Dadashri: People insist, "No, I am 'John'." That means, "I am the owner of the shop and I am also the sign on the shop." 'John' is just a means of identification. From your very childhood, people kept calling you 'John' and you have come to believe, "I am John." You believe this name to be you. In reality you are not that, but you insist that you are 'John' because everyone tells you so. Since you do not know who you really are, you believe yourself to be the name that you have been given. This has had a very powerful psychological effect on you. This effect is so deeply ingrained within you, that you believe that you are 'John'. This belief is wrong, and because of this wrong belief, you have spent countless lives 'sleeping with your eyes open' (oblivious to your real identity).

*John = Whenever Dadashri uses the name 'John' or the name of the person Dadashri is addressing, the reader should insert his or her name for exact understanding.

Questioner: ‘My’ is always there.

Dadashri: What are all the things that fall under ‘My’?

Questioner: My home and all the things inside my home.

Dadashri: Are all of those things yours? To whom does the wife belong?

Questioner: She is also mine.

Dadashri: And these children?

Questioner: They are also mine.

Dadashri: And this watch?

Questioner: That is also mine.

Dadashri: And these hands, whose hands are these?

Questioner: They are also mine.

Dadashri: Then you will say “My head, my body, my feet, my ears, my eyes.” All these parts of your body fall under ‘My’. But then who is the person that is saying this word “My”? Who is the one that says, “All these things are mine?” Have you ever thought about that? When you say “My name is John,” and then you turn around and say, “I am John” do you not think there is a contradiction in this?

Questioner: Yes, I think so.

Dadashri: You are ‘John’ right now. In this ‘John’ there is both ‘I’ and ‘My’. They are like the two railway lines of ‘I’ and ‘My’; they always run together yet they are always separate. They are always parallel and never become one. Despite this you believe them to be one. This is due to the ignorance or unawareness of your true identity. Having understood this, separate the ‘My’. Keep all that comes under ‘My’ to one side. For example, “My heart,” keep your heart on one side. What other things do we need to separate from this body?

Questioner: The feet and all the sense organs.

Questioner: We say, “My mind.”

Dadashri: Do you also not say, “My intelligence.”?

Dadashri: And “My chit (the component of inner vision and previous knowledge in the mind)”?

Dadashri: So even egoism is not a part of you. By saying “My egoism,” you will be able to separate that too, but you are not aware of other components that fall under ‘my’ and that is why you are not able to make a complete separation. Your awareness has limitations. You are aware of only the sthool (gross) components, beyond which there are sookshma (subtle) components. The subtle components also need to be separated, after which there are two more levels of subtlety, sookshmatar (subtler) and sookshmatum (subtlest), which also need to be taken away. Only a Gnani Purush (Self-Realized one) is able to achieve a separation at these intangible levels. Is it not possible to separate the two? If you keep on deducting ‘My’ from ‘I’, at every step and at every level, and put all the things that fall under ‘My’ on one side, then what will remain?

Dadashri: That ‘I’, is precisely what you are. And that is the ‘I’ that you need to realize.

Questioner: After such a separation am I to understand that whatever is left over is who I really am? Is that the Real I?

Dadashri: Yes, whatever remains after the separation, is your Real Self. ‘I’ is the Real You [the Pure Soul].

“I” is God (the Self) and “my” is illusory attachment (maya). “My” is relative to “I.” “I” is real. Without the Gnani Purush (One who has fully realized the Self and is able to impart the Knowledge of the Self to others), you will never be able to know the original Self; however, “I” and “my” are completely separate. If everyone, understood just this much, most of their problems would lessen considerably. This is a science. This is a fundamentally unique spiritual research of Akram Vignan. “I” and “my” are absolutely separate. “I” is the natural state of the Self, whereas “my” is a sense of ownership.

For example, this gold ring contains a mixture of copper and gold. Who do you think will be able to separate the gold from the copper?

Questioner: Only a goldsmith.

2) Every single religion is indeed correct, but the religion in which one examines ‘who am I?’ and ‘who is the doer?’ is on the ultimate path of religion. And Knowing this ‘who’ is the ultimate religion!

3) Karma can only be created if there is 'doership.' As 'John', when you say and believe, "I did this," or "I did that…" you become the 'doer.' This belief then becomes a support for karma. When one stops being the 'doer,' the karma has no basis or support, so it falls away.