Is My Soul a Part of God (Parmatma)?

“My Soul is a part of God or Parmatma” - Here, assuming I (Self) means Atma (Soul), it is an eternal element. An eternal element is always indivisible. Parmatma means the Absolute Soul i.e. the state of Soul where it has no coverings or layers of ignorance on it. One who attains such a state is referred to as God. This is the real meaning of being one with God. 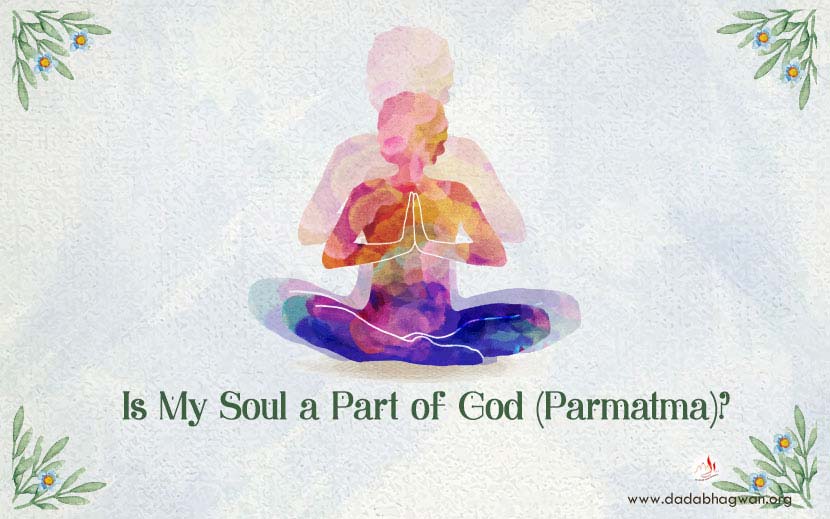 First and foremost, why would one make pieces out of God? You cannot make pieces of Parmatma. Suppose, if you were a part of Parmatma, you would not have to go through any misery at all; why would you ever suffer pain, when Lord Rama, whom you are a part of, is enjoying the bliss of the Absolute Soul forever?

To dispel the misconception of, “The Parmatma (Absolute Soul, God) is complete and I am a part of Him," the Gnani gives precise elucidation, saying that there are infinite numbers of souls and they are all independent (not dependent on each other). Gnanis behold the complete Vision of the whole and complete independent Absolute Soul (Parmatma) that resides in each and every being. So come, let’s understand what the correct facts are, from the following conversations that people have had with Param Pujya Dadashri on this subject...

The Soul Is in the Form of Light; It Has No Gross Form!

Questioner: So, can we really say that all Souls are a fraction of just one Soul?

Dadashri: No, no! All Souls cannot be a portion of just one Soul! Anything, whatever it be, that has form (roop), will always have a portion. However, anything that is without form (aroopi), it does not have a portion. The formless is only in the form of one thing. If it could be made into portions, or broken into pieces and divided, it would never become whole again. So, the Soul (the Self) is in the form of completeness.

Questioner: So, am I the complete pure Soul from within?

Dadashri: You are complete, you are the whole!

Questioner: So, the Soul cannot be divided?

Dadashri: The Soul itself is the Absolute Soul. And it is in an elemental form. Therefore, not a single piece of it can be separated; it is entirely whole. Division would create a portion, and it would destroy the element, but that is not how it is. The Soul cannot be divided.

Questioner: Are all souls separate or are they different forms of one God?

Does the Soul Ultimately Merge into God?

The Soul does not merge or dissolve into God. Why would each Soul relinquish its own independence and sacrifice it unto another?

Questioner: So, is it true that the Soul merges into God for sure, if not in one lifetime, then perhaps in the next lifetime or even in the third lifetime?

Dadashri: No, no! There is no merging over there. The Soul itself is God. ‘I am Chandubhai (you may insert your own name here)’ is the realization that you have right now. And when you will realize ‘I am Soul’ (Self-Realization) that is when you will have the realization of God. The Soul verily is the God itself. Even your Soul is God, and his Soul is also God.

Parmatma (God) resides in every living being!

All these (who have attained Self-Realization with the grace of Gnani) are seeing the Soul that is sitting inside you, and that only is God. After Self-realization, even you can say, “My soul is God.” If merging were to be done, you would not be able to see God! Here, one can see God even in a goat!

Questioner: Why did Brahma feel like becoming many from one? Why did he get the desire of Ekoham Bahusyam (I am One, may I be many)?

Dadashri: The fact is that He himself is just one. He has never become many; he is just one. But because of illusion, it appears to be many. It is of one nature only. No matter how many ingots of gold you have, if you put them together, the gold is one and the same, right? But if brass gets mixed with it, there is damage! All are God; they are in the form of God only. But the reason why they appear to be separate is illusion.

The Element of Soul Is Same by Nature but Separate in Existence!

The nature of the Soul is eternal bliss. Every Soul has the same nature. However, its existence is independent and it never merges into another Soul. Therefore, each of us will experience the bliss of one’s own Soul, independently.

Let’s understand this from the conversation below:

Questioner: It means the element of Soul that is present in all is one only?

Dadashri: Yes, one only. But one means, they are the same by nature!

Questioner: But upon death, when the Soul goes away, does it not reunite? How can it have a separate existence?

Questioner: But if the Soul is of one kind only, then how can its existence remain separate?

Dadashri: Its existence does remain separate; so how can they become one? They can never become one. In these bars of gold, each bar is separate, but it is all called only gold. Similarly, it is said that the Soul is one, but just like these gold bars, they are all separate. There is no difference as such in them. It is through the intellect that we can see things wrongly. Otherwise, in the absolute liberated state, all are residing in their own bliss!

By Nature, We Are All One; It Is Due to Intellect that the Separation Is Felt!

As long as we have this intellect, there remains interference. When the intellect comes to an end is when you experience the oneness in the real nature. What does the intellect do? It creates division, separation. So, once the intellect is gone, this can be easily understood.

The Soul Has No Need to Merge with God for It Itself is God!

The Soul itself is God; even in the ignorant state, the Soul is the God. The difference lies only in the understanding. When one is at home, people will say, ‘He is this woman’s husband.’ And when he goes to the shop, people say, ‘He is the boss.’ When he goes to court, they will say, ‘He is the lawyer.’ But he himself is the same person. Similarly, it is the same Soul that is in the ignorant state; in the interim state; and in the Absolute state (God)! And each one is ascribed an adjective according to the work that it performs.

The Demarcation between ‘I’ (Atma) and ‘God’ (Parmatma) Disappears When Illusion Leaves!

Questioner: With the vision of ‘I am Soul’, is there not a separation of the Soul in that?

Dadashri: When you have the awareness of ‘I am Soul’, then the separation between living being (jiva) and God (Shiva) has been broken.

Questioner: That is right, but what is the difference between living being and God?

Dadashri: The living being asks for enjoyment from impermanent and perishable (vinashi) things, and its faith and belief lies in the temporary things. God (the Absolute Self) only has faith and belief in the permanent and indestructible (avinashi), and the Absolute Self only believes in its own eternal state. It has no value for the things that are destructible and impermanent. That is the only difference. Jiva (living entity) means that it is itself immersed in illusion. And when that illusion leaves, the delirium and obsession over impermanent things disappears and it itself becomes the Absolute Self (Parmatma / God)!

There is really no difference between the Lord, a Spiritual Master, a Mayor, a chaste woman, a prostitute, a pickpocket, or a donkey in the terms of the inner content. This is because the Soul within everyone is the same. The only difference is that in the Enlightened beings, the Self is fully manifested and in us, it is veiled. However, it is only a matter of time for our veils of ignorance to be removed and the Self to express! Meeting a Gnani is all that it requires to experience that my Soul is God!!!