How can you be free from all fears with Self Realization?

Every living creature in this universe is troubled by fear. Fear is inherent in every living being but the intensity of fear is within normal limits. They feel fear only when the circumstances of fear arise. Humans, however suffer from viprit (wrong) fear. Viprit means in a single situation of fear, one will see or imagine hundreds more. It is also viprit fear to see fear where there is none. For example you may have invited only one guest for dinner but you feel as if one hundred guests are coming. This is viprit fear. Viprit fear is false fear, imaginary and worldly and highly aggrieved in intensity.

What breeds fear? Fear is born from rejection borne out of abhorrence. Also there is continuous presence of fear in feelings of contempt and disgust. Why are some people afraid of the police? It is because they have a dislike towards them. Why do the law courts make one afraid? Does the court itself harm anyone? No, but because of abhorrence for it, one fears the court. Fear is the expression of abhorrence and contempt one nurses within. One fails to see God in a snake and hence fear arises. An encounter with a snake is purely a circumstantial evidence. If one encounters a snake and no feelings of fear arises within him, then the snake will pass away quietly without bothering him. Nothing will happen if there are no pending accounts from the past life.

Samsaran marg is the path of spiritual evolution of all embodied living entities. It is the worldly life as we know it and it is full of illusion. It is like a ghost of fear, fright and apprehension. What is this ghost? It is an illusion, a false creation of the mind. If before going to bed one becomes fearful of a ghost or a snake in the room, then he would not be able to sleep the entire night tormented by this fear. The fear will vanish as the day breaks and there is light in the room. Such is the worldly life too.

The only difference between the fear of ghosts and the fear experienced in worldly life is that the latter is associated with a prolonged reaction to fear. For example worldly fear is associated with abhorrence for a situation or a person one dislikes. In situations of fear of ghosts, the fear lasts only until daylight arrives. It does not continue. Fear in the worldly life is propagated through ignorance (raag and dwesh). One constantly tries to get rid of situations that cause fear.

Fear exists because of ignorance of the Self. And reactions of fear are propagated through the belief of 'I am Chandulal' (believing the relative body to be one's real self). Fear and reaction to fear is inherent in Chandulal*. While praying or meditating, a sudden loud noise will automatically startle and shake the physical body. This happens to Chandulal* (reactive complex, reflex action) 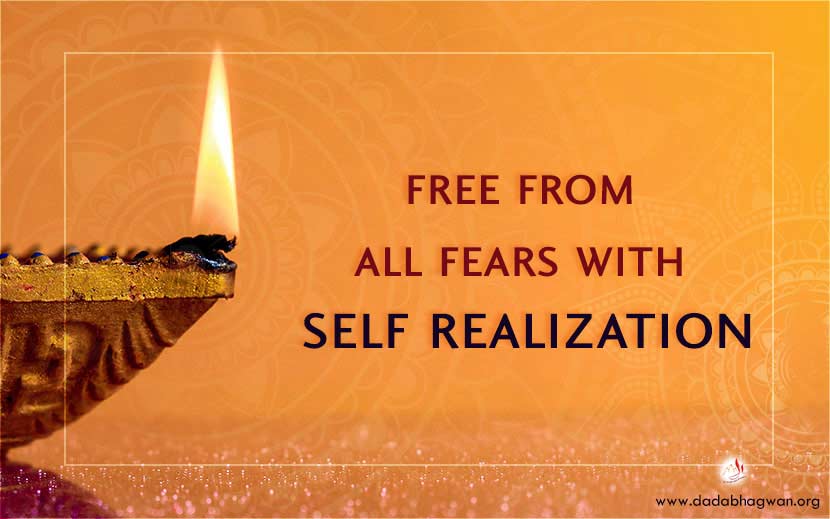 Everything will come to you naturally but you have to have trust. People have fear in, 'What is going to happen if I don't get this or that?' This is all unnecessary (viprit) fear.

Intellect is good for the peace of mind but not for inciting fear. The intellect that induces fear is false intellect. It should be suppressed even before it sprouts.

If you want to fear anything then why not fear death? There is the possibility of death staring at you every moment of the day. Why do you not fear that? If you did, you would discover the path to liberation. But instead people become indifferent and insensitive to such matters.

*Chandulal  =  Whenever Dadashri uses the name 'Chandulal' or the name of the person Dadashri is addressing, the reader should insert his or her name for exact