What are types of charity / donations?

Dadashri: There are four forms of charity: food (ahara-daan), medical care (aushadha-daan), spiritual knowledge (Gnan daan) and The State Of Absolute Non-Violence (abhaya-daan  - conduct that raises no fear in any living being). 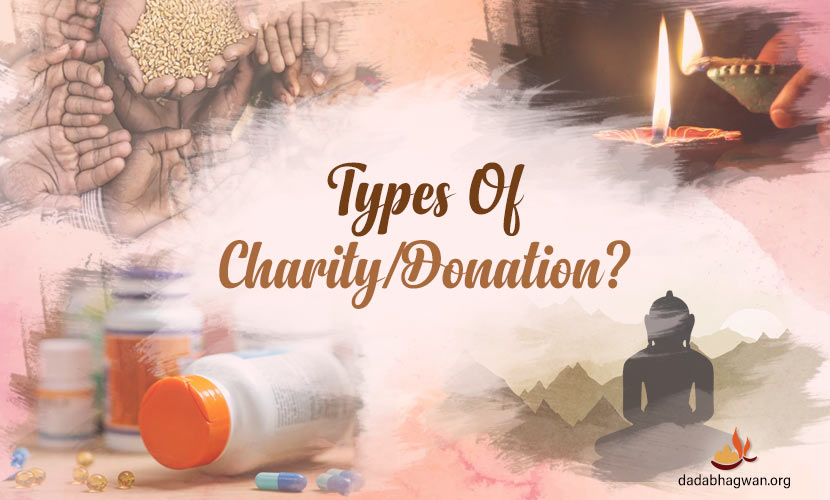 First, comes the charity of food. When someone comes to your door at noon and says, "Brother, please give me something, I am hungry," you should reply by saying, "Please sit down right here, and I will serve you food." This is charity of food. Someone may interfere by telling you, 'If you feed lunch this robust man, what about his dinner?' God has said for one not to interfere in such matters. Because of your charity, that man will live at least one more day. Tomorrow he will find someone else to help him live. You do not have to worry about what will become of him tomorrow or in the future. When someone comes to your home, give whatever you can. At least he will live today, and that is what matters! Something else may be in store for him tomorrow. There is no need for you to worry.

Questioner: Is charity of food considered the most valuable?

Dadashri: It is considered good, but how much can you give? People will not keep giving forever. It is enough to feed someone just once. He will find his second meal somewhere else, but today he lives because of that one meal! Nevertheless when people give food, do they give fresh food or leftovers?

Questioner: They get rid of their leftovers. What can they do if they cooked too much?

Dadashri: At least they are making good use of it! When one gives freshly prepared food, then I will accept that it is correct. Surely there must be some rules of the science of the Enlightened Ones (Vitarag); it cannot be haphazard. Any other time you can get away with it, but not here.

Dadashri: Charity of medicine is considered more valuable than the charity of food because it keeps a person alive longer and gives him relief from pain and suffering. Many of our women and children regularly give charity of food and medicine. It does not cost too much, but it should be done all the same. If a poor man comes to your doorstep give him whatever is ready at the time.

Gnan daan is even more valuable. Money donated towards books that guide people on the right path towards their salvation is all 'gnan daan.' By gnan daan one can progress to a better life form in his next life or can even attain liberation. God has said that gnan daan is the most valuable and highest daan (that can be carried out by ordinary people). Where money is not involved, He has talked about abhaya daan. As far as money is concerned, he has said to give gnan daan and those of ordinary means should give charity of medicine and food.

Questioner: But if people have a surplus of money, should they not make donations?

Dadashri: Giving of donations is the best. Give to reduce people's misery and suffering and use the rest on a constructive path of charity. Gnan daan is the charity that leads people to the right path. That is the highest form of charity in this world!

You benefit so much from this gnan (knowledge) by understanding just this one sentence, so imagine how much more can be gained if people were to read a whole book?

Dadashri: Yes, those who have more money should primarily do gnan daan.

But what kind of gnan (knowledge) should it be? It should be the kind that will help people of the world. The products of such charity are for the salvation of the world, not for entertainment. People enjoy reading books and fictions but it does not benefit them; on the contrary they regress in their spirituality.

Abhaya daan Is The Ultimate

Abhaya daan is where one's conducts is such that he will not raise fear in any living being.

Questioner: Can you explain abhaya daan some more?

Dadashri: Abhaya daan means that you do not hurt any living being in the slightest degree. Let me give you an example. When I was in my twenties, I used to go to the movies. It would be midnight by the time I would come home. Walking home, I would startle sleeping dogs with my footsteps because I had metal studs on the soles of my shoes. It occurred to me then, what kind of person I was to startle the poor, sleeping dogs. After that I would remove my shoes each time I walked past them. This is what I used to do even at that young age. Don't you think the noise would startle the dogs?

Questioner: Yes and it would interrupt their sleep.

Dadashri: They used to get startled and naturally they would bark. Would it not have been better to let them sleep so that they would not disturb others as well?

So, for abhaya daan, one should first have the inner intention (bhaav) of not hurting any living being, even in the slightest degree. Only then will this come into practice. The Lord has called this the ultimate of all charities. No money is involved in this charity. This is the ultimate form of charity, yet people do not have the capacity for it. Even those who have money cannot give to this charity. Therefore they should perform their charity with money.