What are the different types of spirituality? 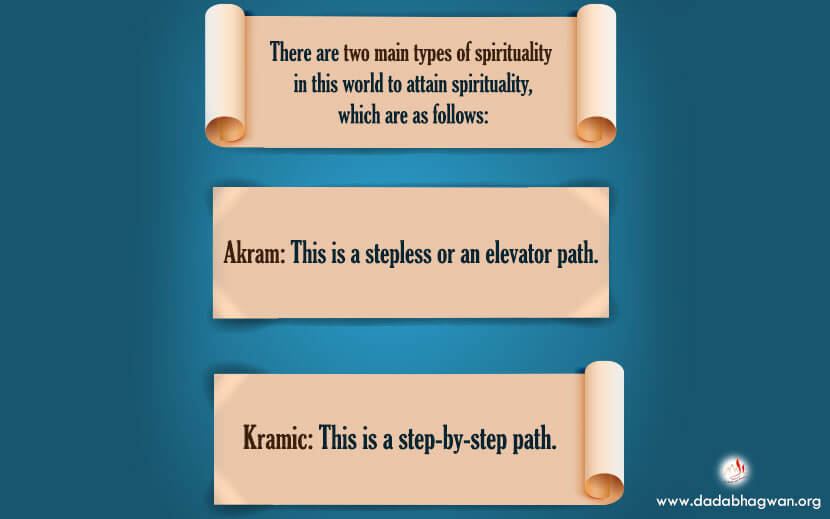 There are two main types of spirituality or spiritual paths in this world to attain spirituality, which are as follows:

Focus in Kramik and Akram Path

In the Kramik path, one is asked to stop doing bad deeds and do good deeds. One is asked to get rid of their weaknesses of anger, pride, deceit and greed by turning towards good things. Akram does not focus on doing anything. In Akram, the main change starts in the inner intentions.

Renunciation in Kramik and Akram Path

Both types of spirituality involve renunciation. Kramik path is a path of renouncing our possessions. First, one abandons gross possessions. Then, one leaves subtle possessions such as attachment, anger, pride, deceit and greed, and finally reaches up to the stage of Absolute Soul.

On the Akram path, the Gnani makes you renounce your ego and accept your Self. So, with the grace of Gnani, the conviction, the awareness and the experience of the Pure Soul begins within. Now with the awareness of the Soul, one can clear the faults of anger, pride, deceit and greed.

Significance of the direct Grace of the Gnani in Akram

The Gnani directly graces us with Self-realization and awakens our Soul. After attaining the Soul, one experiences body and Soul as separate. This awareness remains, and with it, neither any sort of unhappiness nor happiness of worldly life shall be felt. Rather, one experiences bliss all the time from within one’s Soul!

If you are getting to know your true Self within two hours, as a result of which you do not find any unhappiness, what else can be greater than it?  After receiving this Gnan (knowledge of Self), one feels a significant change immediately. Upon hearing its experience, people are automatically attracted to this path.

In the following conversation, we get a glimpse of the experience after Self-realization through the Akram Path:

Dadashri: Tell me if you happen to wake up at two in the morning, what is the first thing that comes to your mind?

Questioner: ‘I am pure Soul’, that is the only thing that comes to mind.

Dadashri: Otherwise people will remember worldly things and people that are dear to them but you remember the Soul. One can never attain the awareness of that which is imperceptible. That is why the Self has been called alakh niranjan (alakh – imperceptible; that which cannot be known. Niranjan – no worldly thing can attach to it or bind it). Yet, here you attain the awareness of the Self in just one hour! Such is the spiritual power of the Akram Gnani! Such is the grace of the celestial Gods and Goddesses! Through the grace of these beings, you are able to attain a phenomenal spiritual state in just one hour! The other path is the science of the Kramik path and this is the Akram path. The knowledge in both the paths is that of the Supreme Lords; there is no difference in the knowledge!