Is Renunciation of Worldly Luxuries Necessary to Attain Spirituality?

A general belief prevails in today’s society that if one wants to pursue spirituality, one has to forsake all worldly luxuries, retire from all worldly duties and obligations, renounce all worldly ties and finally engage themselves into activities such as meditating, chanting, praying, penance and so on. Only then can one progress on the path of spirituality and attain liberation.

However, Param Pujya Dada Bhagwan says, “Renunciation should be natural. That which is to be renounced should fall off on its own.” 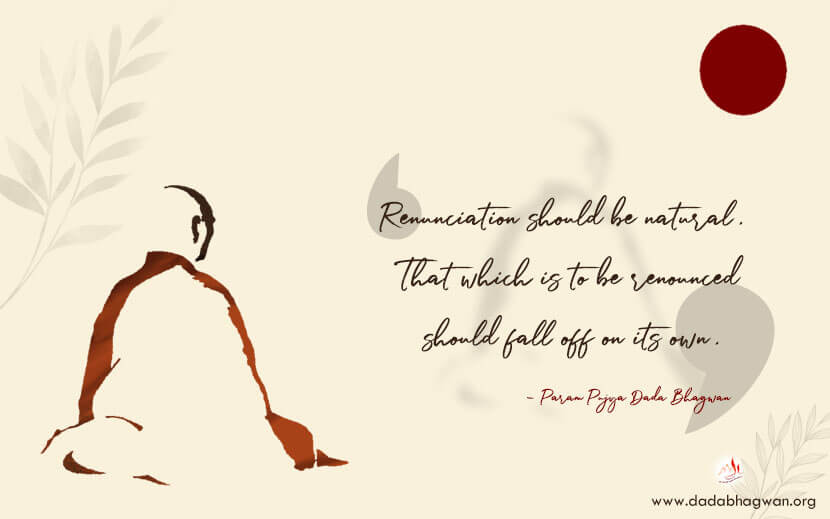 Great personalities such as Shrimad Rajchandra, Lord Krishna, Arjuna and Lord Rama have attained Self-realization, while living a regular worldly life and rendering all their worldly duties and obligations with utmost sincerity and perfection.

How did they manage to do that?

Param Pujya Dada Bhagwan explains, “No one can live without support from the material world. But, after getting the support from one’s own Soul, one doesn’t need the support from the material world. He then becomes independent. True independence is the prevalence of ‘I am certainly free’ amidst any kind of effects (be it the karmic effect of being surrounded by worldly luxuries or the effect of being deprived of the worldly luxuries)!”

Such independence is termed as Moksha !

The ultimate purpose of spirituality is to attain Self-realization, finish all karma and get Moksha (ultimate liberation). So come, let’s understand this term ‘Moksha’ and how do we attain it, in the words of Param Pujya Dada Bhagwan...

Questioner: What is Moksha?

Dadashri: Moksha is liberation from all types of pain and the attainment of eternal bliss. Moksha is the feeling of liberation.

Dadashri: Ignorance of the Self.

Questioner: Is Moksha a location or a state?

Dadashri: It is a state, but not this state that you are familiar with: it is a natural state.

Dadashri: Yes, real freedom – where there is no superior and no subordinate.

Questioner: Is it possible to attain such a state in this worldly life?

But can we realize the soul without forsaking worldly luxuries? Let’s check...

There are two pathways to attain spirituality:

The Kramik path is the common traditional path in which a person renounces worldly things and slowly climbs up one step at a time towards the ultimate goal of Moksha. It involves renunciation of all luxuries.

The other path is the Akram path, which is an exceptional path and is indeed a wonder in this present age. This is because while proceeding on this path, you are not required to acquire or renounce anything materialistic. You can attain liberation even while living your worldly life, just as Emperor Bharat did - he fought battles, learned many skills, enjoyed his royal life and yet attained liberation!

If the worldly life was indeed an obstacle on the path to Moksha, then it would mean that those who have renounced their worldly lives would have had their problem solved. But that does not happen! As a matter of fact, the worldly life does not hinder Moksha at all. For Moksha, it is not the worldly life that gets in the way; it is the ignorance of the Self. The Gnani Purush gives us such a precise and unfailing knowledge of Self that it immediately comes into our experience. The knowledge that gives results is real knowledge!

On the akram path, we directly attain self-realization with Gnani ’s grace!!!

In just two hours, we attain the experiential knowledge of the Self. This process is known as Gnanvidhi, which is totally hassle-free and completely free of cost too.

In Gnanvidhi, we get the knowledge of really ‘who am I’ and we get the right understanding that, “I am not John (you may insert your own name here); I am a Pure Soul.”

Hence, Akram Vignan (Akram Science), in no way, obstructs our daily worldly life. You can live this worldly life amidst all luxuries, and yet remain unaffected by it; such is the science of this Akram path!

When one attains the grace of the Gnani Purush and gets the visa of Moksha, then an amazing future is at hand. Not only the present life, but also our future life shall be full of luxuries and comforts. Such is the path of Akram!

Worldly luxuries are not to be forsaken, but being swooned by the luxuries is to be definitely forsaken. Thus, renunciation should be of the fascination in the luxuries. Worldly luxury is an object to be known while remaining in the state of pure Soul. However, to get there, first we need to attain from Gnani, the Enlightened One, the knowledge of the Self (Self-realization)!!!

If the ‘fascination towards material objects’ leaves, the loss in spirituality also leaves! Let’s dwell on this point in more detail in our next question...