What is Samadhi Meditation? How can one achieve natural (sahaj) samadhi, nirvikalp state?

Questioner: Dada, I can remain in samadhi (unperturbed state) for four hours.

Dadashri: That is fine, but does it leave you after a while?

Questioner: It will definitely go away!

Dadashri: So, would you call it a temporary or a permanent samadhi?

Questioner: It is temporary.

Dadashri: All samadhis that are happening in the world are temporary; they are of the non-self. Samadhi should be continuous and there should be no conflicts in it. Everyone has temporary samadhi. What is your understanding of samadhi?

Questioner: It is possible for one to keep the mind at one location, for a certain amount of time.

Dadashri: But what do you gain out of it? Controlling the breath gives you some benefit, but does it give you peace? You do not feel cold as long as you sit next to a fire, but as soon as you move away, you feel cold again. The fire should be constant so that you are never cold. Real samadhi is completely different. Similarly, if you are hot and you use a hand held fan, you will feel cooler but your hand will hurt, what good is such 'handle' samadhi i.e. samadhi which require you to perform certain rituals? If samadhi can be achieved by pinching the nostrils, then even a small child should be able to achieve the same by doing so. Try and pinch a small child's nose and see what he does? He will instantly get upset and bite you! This proves that it causes suffering, so what good is such a Samadhi laden with physical suffering? Samadhi should be a natural and spontaneous state (sahaj). Natural samadhi is Samadhi; it is one which is experienced in sleep, while standing, sitting, eating, drinking, etc. At the moment 'we' are in a state of samadhi even as 'we' speak and yet 'our' nostrils are not closed, are they? 'We' are constantly in samadhi and 'we' never lose it even when someone insults us. Achieving samadhi by pinching the nostrils is hathayoga (practicing with ego). How can one have samadhi through persistence of ego related action (hatha)? If someone were to remove his guru's picture, he would become very restless within. Samadhi should be constant and without any unrest. That which does not change, that which does not leave is samadhi. That which results in turmoil is called upadhi (external difficult). It is like the discomfort one feels when he goes out into the sun after sitting in a shade. Samadhi that prevails despite adhi, vyadhi and upadhi (mental suffering, physical suffering and problems of external circumstances, respectively) is true samadhi. Samadhi should be permanent. 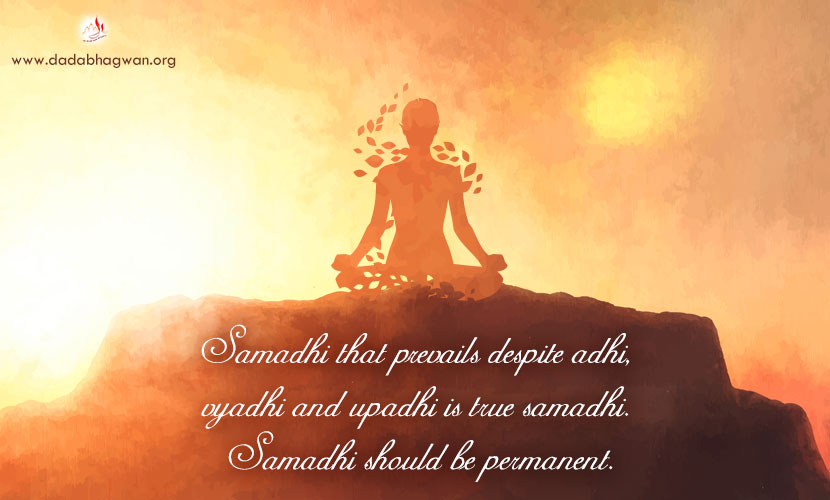 Questioner: I did not know that samadhi could be permanent and continuous.

Dadashri: People experience samadhi when their eyes are closed and that too not everyone. Whereas here, we experience samadhi even with eyes open. Here one is in Samadhi (oneness with the Self) even as he eats, drinks, sings, sees everything. Even an ox can have samadhi when he is blindfolded! That is artificial samadhi. Whereas here for you; you can see God even with your eyes open. You see God while even performing your daily activities. Everyone does samadhi with their eyes closed but real samadhi is samadhi that remains even when the eyes are open. The eyes are not meant to be kept closed; they are for seeing everything. They are for seeing God wherever He is, if one knows how to. In fact samadhi is to 'see' everything exactly as it is, 'hear' exactly as it is, and 'walk' exactly as it is. And despite doing all this, samadhi prevails; such is the samadhi of 'Dada'. People look for solitude to practice their samadhi. There is no solitude anywhere in this world, so where will you go? There is no end to crowds in this world. To find solitude in a crowd is Gnan. When you are in a crowded train, surrounded by crowds of people from all sides, the mind, the intellect, the chit and the ego will remain quiet and then as much solitude as needed is available. Real solitude (opportunity to be the Self) is available only in heavy crowds (stresses from all aspects of the non-self). Solitude in a crowd is true solitude.

The ascetics sit in samadhi; they renounce their worldly life, they go to the Himalayas and then they meditate, 'I am not a sadhu, I am not this. I am not that.' In doing this they experience some happiness but their samadhi is not the nirvikalp samadhi (bliss of freedom from ego) that they experience because they have not entered within with understanding.

Questioner: I know someone who attains samadhi even while standing. He cannot hear us even if we shout.

Dadashri: That is not called samadhi; that is unconsciousness. What is samadhi? Samadhi is a natural state. It is true samadhi where all the five senses are awake and alert; the person will have awareness when someone touches him. You cannot call it samadhi where there is no awareness of the body. That kind of samadhi is the result of unduly subjecting the body to suffering (kasht samadhi). It can never be called samadhi where there is undue suffering of the body. The one who has true samadhi has complete awareness.

Questioner: What is a nirvikalp samadhi?

Questioner: What is the meaning of sankalp and vikalp?

Dadashri: Vikalp means 'I' and sankalp means 'my'. One (the self) becomes that which it imagines to be (kalptaru, kalpswarup). Whatever vikalp is made, one becomes that. When one says, "I am Chandulal*," he becomes that. When he says, "I am unhappy," he becomes that. This projection is the vikalp. So this goes under 'I' and 'mine'. That vikalp can never be broken until he attains the knowledge of the Self, and hence he can never become vikalp-less (nirvikalp). 'I renounced this', 'I read so many scriptures', 'I performed so many worships' etc., are all vikalps. These vikalps remain entrenched and therefore he cannot say, "I am the Soul." As long as the awareness and the belief, 'I am Chandulal*', 'I am a priest', 'I am an ascetic' etc.,' has not gone, how can he say, 'I am a pure Soul?' And until then how can he attain nirvikalp samadhi (bliss of the egoless state)? All these are merely words and everything remains only as words. Only vitarag Lords and their followers were in nirvikalp samadhi. They simply remained 'knower' of all that unfolded whether right or wrong. They were 'knower' of stones that were hurled at them as well as 'knower' of garlands of flowers that were offered to them. How can you call them vitarags if they are not 'knower'? But some assert, 'We are in nirvikalp samadhi,' just because their awareness of the body is gone. Awareness of the body is absent even during sleep, so that too can be called nirvikalp samadhi, right? Those who lose awareness of their body when they are awake and see light when their chit is actively projecting are experiencing only that, nothing else. That is not the ultimate state. It is a grave mistake to believe and affirm so. In nirvikalp samadhi there is complete awareness of the body, as well as the Self. Otherwise, vitarag Lords would not be able to see anything in their keval Gnan.

*Chandulal = Whenever Dadashri uses the name 'Chandulal' or the name of the person Dadashri is addressing, the reader should insert his or her name for exact understanding.