Moksha vs nirvana: What is the difference?

Moksha begins with Liberation and Nirvan happens when one attains Ultimate Liberation! This is the actual difference of moksha vs nirvana.

With Nirvan, there comes an end to the wandering that has been going on since infinite lives.

When one attains Nirvan, the Soul is called Siddha Bhagwan. The Siddha Bhagwans reside in the Siddha Kshetra, an abode for liberated Souls located outside this world. They remain there in their eternal bliss forever!

So, does this mean that Moksha is a place where we go? Let’s understand this further from the conversation below:

Questioner: But what I wanted to know was whether Moksha is a place where we go to, or is it something we have to acquire or is it some kind of a state?

Dadashri: Moksha is your own nature. Your own nature is Moksha itself. But in order for you to realize your nature, would you not have to do something? Your nature is Moksha, but because you are not aware of this state, you are not experiencing the bliss from it. You do not have to go to any place for Moksha. Freedom from all pain and unhappiness is the first stage of Moksha, and the second stage of Moksha is liberation from the worldly life! Once you attain the first Moksha, you will see the second Moksha right in front of you, it will come to you on its own. The first liberation is in the form of ‘causes’, and the second is in the form of ‘effect’. After freedom from ‘causes’, you can carry on with your worldly duties of marrying off your children and all that. There is an intent of freedom even in that. And right now, ‘effect’ Moksha is not possible. I myself remain in the ‘causes’ Moksha and all other work carries on. By whichever body one attains the awareness of freedom, one only has one or two lifetimes.

Only when One is Liberated from Mistakes, One Attains Ultimate Liberation!

One who attains Nirvan has overcome all mistakes and is therefore liberated from the worldly cycle of birth and death forever. 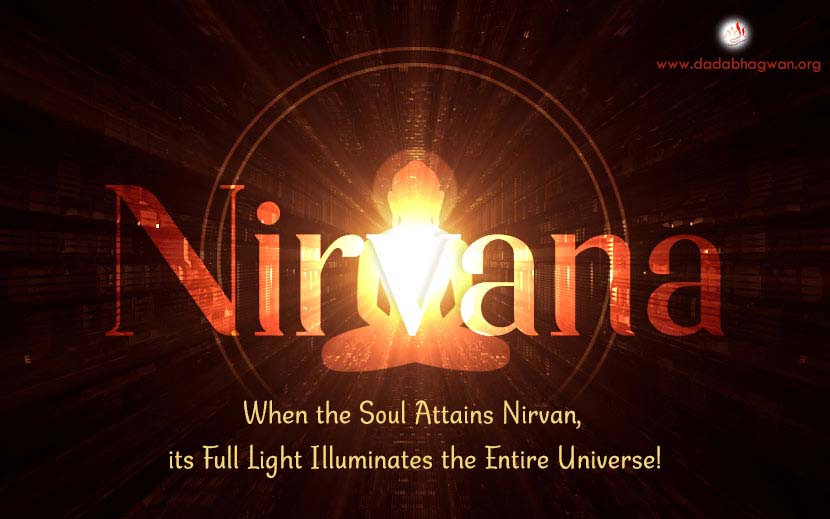 When the Soul Attains Nirvan, its Full Light Illuminates the Entire Universe!

When the Absolute Souls and Tirthankars reach Nirvan, their Soul is released and it illuminates the entire Universe. In the full and complete state, the body disappears and the Soul’s light spreads throughout the entire Universe. That is its nature (swabhav). This is the key difference between moksha vs nirvana.

Everyone’s Soul is such, but presently, it is covered with the layers of karma. As long as human beings have ignorance of the Self, the light of the Soul does not come outside. Only when the knowledge becomes full, the light spreads throughout the entire Universe. When all the coverings over the Soul get uncovered, the effulgence of the Absolute Soul illuminates the entire Universe.

For instance, if you put a light inside a pot and fix a lid over it, there would not be any light coming out of the pot; it would only light the inside of the pot. However, if you break the pot, how far will the light go? The light will spread around whatever receptacle it is placed in, and throughout the room it is put in. In the same way, if the Soul becomes free of coverings, it pervades all regions of the Universe. Moreover, when you put the light bulb inside a pot, its light is intense. When the pot is broken, the light will flood the room but its intensity would decrease. The further this light spreads, the less intense it becomes. That is because it is physical light. On the contrary, the light of the Soul never loses intensity no matter how much it spreads; even if it spreads throughout the entire Universe on Nirvan, the light always remains the same.