How to attain moksha in Kaliyuga (the Current Era of the Time Cycle)?

If we were to go to the airport, it would get tedious without knowing the path. However, when we get to know the path through some means, the journey is simple. Thus, first, we need to find the one who can give us the details (knowledge) of the shortest and the easiest path. The next step is to follow the path that is shown. This is the answer to how to attain Moksha in Kaliyuga.

Let us first find out who can show us the path to liberation (Moksha).

The ones who are instrumental in the salvation of the world are the ‘Gnanis’ (enlightened people). They have experienced the Soul and can show us the path that they followed. Their senses of attachment and abhorrence, as well as their anger, pride, deceit and greed are all null. They do not need to read or learn anything, nor do they need to constantly recite God’s name. Each and every sub-atomic particle of all vices have finished. They are liberated and they liberate others. Gnanis are always and only in a state of Pure Soul. These super humans, who are embodiments of knowledge, are very rare. That is why they are extremely difficult to find!

Even Shrimad Rajchandra, a former spiritual master in India, has said that Gnan is with the Gnani, without whom one can never attain liberation. Therefore, all you need is a Gnani who can guide you on how to get Moksha in Kaliyuga. The twenty-four Tirthankars have said that you need a nimit (someone instrumental in a process) to attain knowledge of the Self (Atmagnan). A Gnani has experienced the Soul and has the power to enlighten the Souls of others. He is the one who can show how to achieve Moksha. 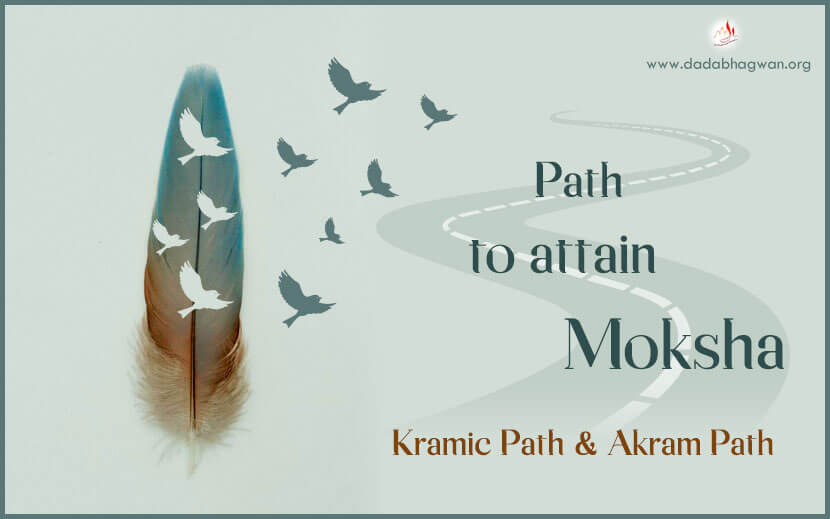 When it comes to attaining Moksha, there are two paths. One is kramic path, which is a traditional step-by-step path and the other one is Akram path, which is a stepless path. Here are the details.

In this era, this same Gnan manifested in Shri. Ambalal M. Patel, also known as Dada Bhagwan. He revealed it to the world as Akram Vignan (the spiritual science of the stepless path to Self-realization). This unique science not only takes us to Moksha but also provides practical day-to-day solutions that lead to harmony and happiness.

Let’s have a look through a conversation that happened with the Gnani Purush Dada Bhagwan on how to achieve Moksha in Kaliyuga or the Knowledge of the Self:

Questioner: Is Gnan (Knowledge) the solution for getting rid of anger, pride, deceit and greed? Is it possible to attain such a Gnan in this life?

Dadashri: Real Gnan (knowledge) is that which gets rid of your anger, pride, deceit and greed. That is called Gnan.

Questioner: How can one attain that?

Dadashri: That is the very Gnan (Knowledge of the Self attained through Self-realization) I give you here. All these people’s anger, pride, deceit and greed are gone.

Questioner: Is it so easy to become simple and straight (sarad) in the heart?

Dadashri: Whether that happens or not depends on one’s karmic account from the past life. That is a development of that individual; the more straightforward (sarad) one becomes, the better it is. But all that is applicable in the Kramic path. In the Kramic path a simple and a straightforward man will attain religion (dharma), however even after a million lifetimes there is no telling when he will attain Moksha. And this Science is Akram. This is the path of Gnan, which can bring liberation for a person in just one lifetime. If you follow this Gnan according to My Agnas, with devotion and dedication (aradhana), then You will be in constant samadhi (a state free from any effects of mental, physical or externally induced pain). This will be the case even for a busy doctor like yourself. Nothing will affect or obstruct you. This is a very phenomenal science.

Dadashri: No. Here there is no such thing as surrendering. There is oneness (abhedta) here. I do not feel any separation with anyone here or with anyone else in the rest of the world.

Questioner: Your state is very high and mine is very low.

Dadashri: It is not like that. You are of my level. You simply have to keep seeing me and you will become like me. There is no other way. You become like the one you see.

Questioner: Do we not need purity in worldly interactions (vyavahar)?

Dadashri: There should be so much purity that your worldly interactions would be called ‘ideal’. It should be the kind one has never seen before. ‘Our’ interaction is of very high quality. That is how this science is. The Self that I ‘show’ You (in the Gnan Vidhi) is the Self of absolute knowledge (kevalgnan), and the Self people give in the world is the knowledge of the Self from the scriptures.

Questioner: How can a person digest this Gnan without prior qualifications, or earning a right to it?

Dadashri: There is no need for any qualifications or rights. This is not based on conduct. What is external conduct all about? The whole world places emphasis on external conduct. External conduct is an effect and not a cause. I remove all the causes; thereafter the effects will automatically wash away on their own.

Moksha is in your hand if you meet a Gnani. Gnani Purush Dada Bhagwan, the founder of Akram Vignan, has empowered Pujya Niruma and Pujya Deepakbhai with special spiritual powers (siddhis) to conduct satsangs (spiritual discourses) and make others realize the Self. Pujya Deepakbhai is the current torchbearer for Akram Vignan, and can make you Self-realized and attain Moksha.


“Only Gnan (knowledge of the Self) will give liberation. All other instruments (and practices) create bondage. Akram Vignan is not found in any books; it is in the Heart of a Gnani (the enlightened one).”