What did Arjuna experience during Krishna Bhagwan’s virat roop darshan? What is Shree Krishna virat roop?

Questioner: Shree Krishna had shown the universal vision (vishwadarshan) to Arjuna? What is it?

Dadashri: That vishwadarshan is not the same as Atmagnan (knowledge of the Self). So many are born, die and are born again. This is how everyone is caught up in the time cycle, therefore there is no one that kills or gives or spares life (creator, sustainer, destroyer). "Therefore Dear Arjuna, the moha (the illusion) that attaches you to doership, that You are 'doing' the killing is wrong, so let it go." For this Shree Krishna showed him a violent and a very frightful scene; he showed Arjuna a vast picture wherein everyone is dead. Upon beholding this, Arjuna was shaken up, but as he understood everything, he became ready to fight. Then the Lord showed Arjuna the tranquil state of the Self. In all this vast scene (virat swaroop) that the Lord had 'seen' Himself, is what He had shown to Arjuna and that is what 'we' call vyavasthit. 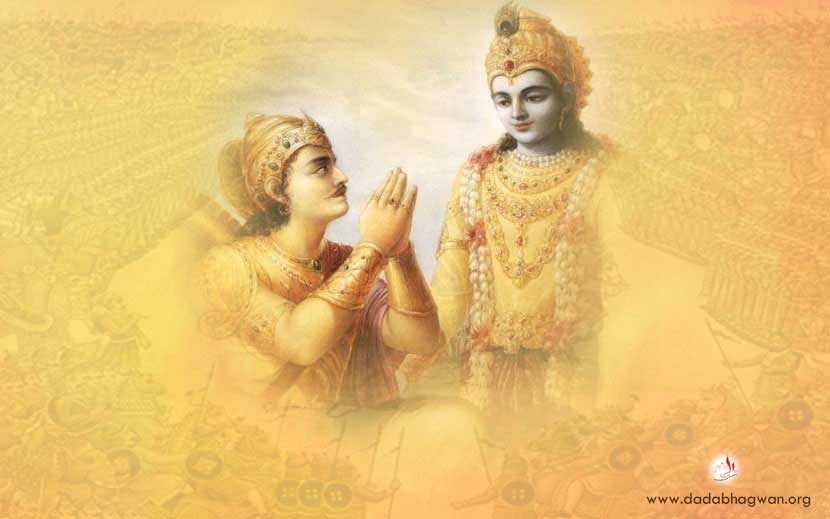 It is vyavasthit even when your pocket gets picked, you will not have any anxieties or desires when you understand this. Knowing and understanding vyavasthit will not create illusion. The inspiration from within, makes everything move forward. All these inner components of mind, intellect, chit and ego, as well as all that meets the eye and the senses, everything that goes on the outside; are 'machineries' which run according to vyavasthit.

The One who takes away the ego is a Viraat purush!

Questioner: What do they mean when they speak of the Great one?

Dadashri: A person who takes away another’s ego, is considered to be a Great being (viraat purush).

Questioner: Does that mean that when one does darshan of such a Great being, the ego departs?

Dadashri: Only when the ego departs, can it be said, that you have come face to face with a Great one.

Questioner: Is doing darshan of a viraat the same as attaining knowledge of the Self?

Dadashri: To do darshan of a Great one (viraat) means to recognize a Gnani. In reality, who can be called a true viraat? It is someone who can devour our ego. He who annihilates our ego to pieces, is called a viraat! And what is the result of that? He also transforms us into a viraat! It takes a viraat for people to bow down in reverence. Arjuna surrendered to Krishna Bhagwan, only after Krishna Bhagwan showed Arjuna, His viraat svaroop!

That is why it is written, ‘He does not have the power to break a grilled papadum (paper thin crisp cake made of flour mixed with spices / thin crisp wafer of multigrain flour mixed with spices / lentil wafer) yet He takes away my ego’. That's when a person tells me, "But that's true. You have taken away my ego!" But, that is the viraat purush! Yet, one goes to look for a Great one as written in the scriptures! The one who can take away our ego that is a viraat purush! What other kinds of viraat purush are there in the world?  It is a very simple matter. People ask me, “Do you like to be called a Great one?” I say to them, “Where am I going to attach this adjective to my name? Letters like A.B.C.D., MBBS, this or that!  degrees of MBBS and MD and such?” I am a person without adjectives (nirvishesh).

The Ego is such that even after thousands of lifetimes, it will not go away. This is not the only thing. But where there is the Great one (viraat svaroop), there He takes away our egoism. Viraat svaroop is one in whom there is not the slightest of intellect (buddhi). Not even a drop of intellect. He can remove your ego as easily as letting the air out of an inflated tyre. And So only he whose ego is completely gone can take away other person’s ego. And he is called the Great one (viraat purush). The one who destroys his own ego completely is an Atma-Gnani (Knower of the Self). The one who takes away the ego of other people is a viraat purush. He is an Enlightened One. He is a true giant amongst us.