What is Navkar Mantra ? 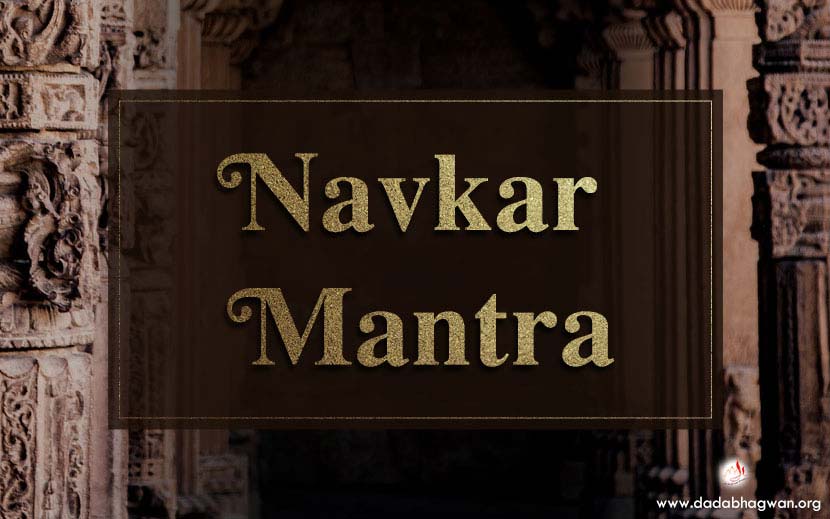 Lord Rushabhdev gave the Navkar Mantra. Reciting this Mantra with an understanding and devotion decreases the burden of the heaviest of karmas; this mantra will make the pain of severe suffering appear as a mere pin prick. It is for everyone. It is for those who want to wash away their bad deeds.

‘Namo Arihantanam’. ‘Ari’ means enemies and ‘hantanam’ means to conquer. So in this obeisance we are bowing down to Arihant Bhagwan, the one who has conquered all the inner enemies of anger, pride, deceit, greed, attachment and abhorrence. From the moment of total destruction of the inner enemies, to the state called Keval Gnan until final liberation, one is an Arihant. Such a one is the absolute manifested living God. He may have become so from any religious order - Hindu, Jain or any other race and he may be found anywhere in the universe. This obeisance says, ‘I bow down to the Arihant Lord wherever He may be.’

Neither Lord Mahavir nor the rest of the twenty-three Tirthankars can help you attain liberation now. They have already become liberated. When we say ‘Namo Arihantanam’, that mantra reaches the Arihant, wherever they may be in the universe, just like the mail that always reaches its destination. It will not reach Lord Mahavir. Presently, people believe that when they say ‘Namo Arihantanam’, it reaches Lord Mahavir. The Twenty four Tirthankaras of the past are now in the fully liberated state as the Siddhas. They are in the category of ‘Namo Siddhanam’. Only the currently present Tirthankaras are referred to as Arihant.

Those who have become Siddha from here, those who no longer have a physical body, and will not be acquiring another body again are the ones who are eternally in the state of the Siddhas. I bow to such Siddha Lords. Having conquered their inner enemies: anger, pride, deceit, greed, attachment, abhorrence, Lord Rama, Lord Rushabhdev and Lord Mahavir are all now in the Siddha Loka where they are eternally in the state of the Siddha. To them I offer my obeisance.

Why have they put ‘Namo Arihantanam’ before the ‘Namo Siddhanam’?

The reason is that those who have become Siddha are totally liberated but they cannot help us in any way. For us, the Arihants are useful and that is why they have been placed first, before the Siddhas. We have to go where the Siddha Lords reside. That is our goal but who is more beneficial to us? The Arihant! He has conquered the six inner enemies and is showing us the way to do so. He graces us with His blessings. That is why He is placed first. He is very beneficial to us. So the importance is of the living One.

This obeisance is for the Acharyas. Acharyas are those who observe the principles laid down by the Arihants and who teach others to do the same. To such Acharyas, I pay my obeisance. Acharyas are Self-realized and their self-control is spontaneous. Self-control in them means they do not react to the existence of anger, pride, deceit and greed. Self-Realization or Atma-Gnan must be there before one is called an Acharya. We are paying obeisance to the Acharyas who have no desire for any kind of worldly happiness and who are following the conduct for progressing on the path of liberation of the Vitarag Lords. They observe these codes of conduct and teach the same to others. To such a being I bow. Whoever He may be or of whatever sect He may belong to, as long as He is Self-Realized, to Him I bow. This obeisance will reach them wherever they are in the universe. This in turn benefits us instantly.

This obeisance refers to the Upaadhyayas. Who are the Upaadhyayas? They are those beings who are Self-Realized and are studying the scriptures and teaching the same to others. It is to such Upaadhyayas that we send our obeisance. Upaadhyay means they have understood everything; however their conduct is not yet perfect. They can be of Vaishnav, Shiv or any other religion. Once Self-Realization occurs, all anger, pride, deceit and greed leave; no such weaknesses would remain. If one were to insult them, they would not exhibit any anger. Would the Sadhus of today get angry if insulted? Anger can never be accepted at this level.

Loye means loka (different worlds in the cosmos). This obeisance means that I bow to all the Sadhus wherever they are in the universe. Who can you call a Sadhu? Not the ones dressed in saffron or white attire, but those who have known the Self and are proceeding in that direction only. This obeisance is not directed to the Sadhus who have desire for a worldly life or any material gain. I bow to such Sadhus who have no attachment to their body (dehadhyas).

The practice of yoga (union) is a worldly state. The state of Soul is a different thing altogether. There is a branch of yoga that focuses on the physical body, different body postures and asanas (positions). This is a union with the physical body (dehadhyas). Then, there is yoga of the mind (mano yoga) where one tries to focus on the chakras- energy centres of the body. There is japa yoga - chanting of mantras, that is the yoga of speech. These three yogas are overt, worldly and transient and are distinct from Atma yoga, which is the union with the Self. The result of worldly yogas is material happiness and physical well-being. Atma Yoga is considered the highest of all yogas. It leads to liberation and eternal bliss. Savva Saahunam means all those that practice Atma yoga. To such beings I do bow. So who is a Sadhu? The One who has attained the conviction (pratiti) of the Self is a Sadhu. This is the first step on the path of liberation. The Upaadhyayas have progressed further and their conviction is much stronger, and the Acharyas have attained the Atma Gnan. The Arihant Lord is the complete, Absolute Self. These salutations (namaskars) have been ordained in this manner.

The Great Importance of the Navkar Mantra

If one does not recite the last four lines, it is fine. The mantras are only five in all. The remaining four lines are to stress the importance of the mantra. It is not called the Navkar mantra because of the nine stanzas it has. These are not just nine stanzas. The word Namaskar is the same as Navkar. The original word is the Namaskar mantra, but in the Maghadi language it is called Navkar. So Namaskar is now Navkar. It has nothing to do with the nine stanzas. In all, there are only five namaskars.