Why do conflicts arise within the mind? 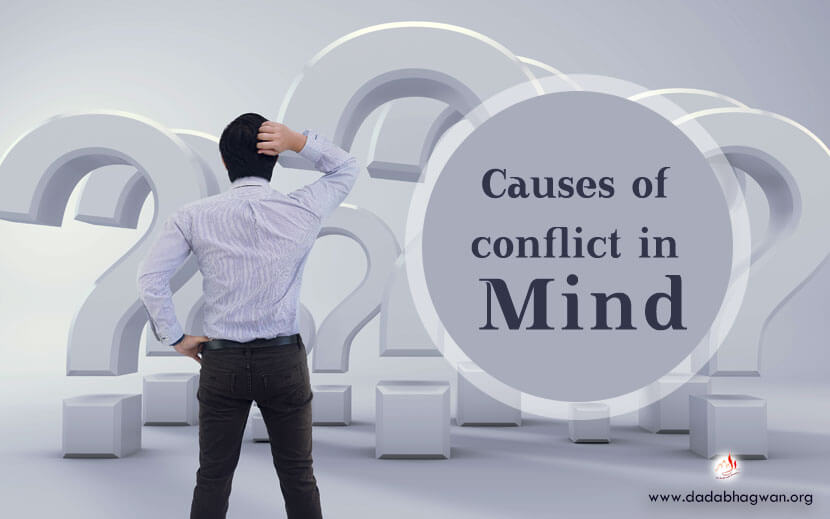 What is the mun (mind)? It is a ready stock brought forth from the past life. It is in the form of substance of whatever you had in your past life. Whatever circumstances you were faced with in the past, your faith (shraddha) developed accordingly. Worldly life means samsaran margh (natural progression of evolution of the self). On that path effect (dravya) (of past karma), location (kshetra), time (kaad), inner intent (bhaav) are changing constantly. It is a path, so in your past life, if you are on the eleventh mile (of progress) of your journey, and you see desert all around you, you decide in your mind that you would be content even if you had just one room. Even if it were made from corrugated metal, it would be fine. Then you decide that it would be fine if you had a small income that would help pay for your basic needs; that would be enough. This is what you decide.

Then you come further here on the sixteenth mile where everything is in abundance; anything anyone would want can be found here. You see people enjoying all the comforts and pleasures. Nevertheless you have brought forth your ‘old knowledge’ but what does the new knowledge (of the current life) say? It says that it is good to have fun. But currently you only have what you had decided upon in your past life; just a one room home, which now keeps bothering you. One gets whatever he had asked for, so he questions why he keeps getting one and the same thing? So it bothers him. You get whatever you had decided upon, but at the same time the new knowledge decides upon new things. There is a constant conflict between the new knowledge and the old. There is conflict between the old faith and the new one. And that is the cause for the unrest in one’s mind. That is called the unrest of the mind. The whole world, whether one is a saint or a recluse; they all have unrest in the mind.

One was on the eleventh mile in his past life where he acquired a strong knowledge; faith became so strong that one should not take bribes. So, when he is on the twelfth mile (currently) where his friends and everyone around him take bribes, he is not able to do so even when he wants to, because on the eleventh mind he was convinced that it is wrong to take bribes.  Therefore today the effects of his past are coming forth. The faith was established in the past life and its result or effect has come now.

For a long time he did not want to take it (bribes) and he would even say that it is wrong and that he does not want to take it. Then his wife would nag him for over ten-fifteen years that all their friends have nice homes and they have nothing. This shakes his faith and he feels, ‘I am wrong for not taking bribes; I should indeed take bribes.’ Now his faith is altered but not his outward conduct (pravartan). His conduct is the same that he cannot accept bribes.

He would leave home with a decision that he is going to take bribes but when he goes to the office and someone offers him a bribe, he cannot take it. However, he feels he is indeed weak; he feels he is a fool (for not taking the bribes). Hey! You are neither weak nor a fool. This is just an effect of your faith that was established (in the past life), and now that faith has changed. Do you understand what I am saying here?

Someone may ask, ‘How come he has conflicts with his wife when his wife is so nice?’ The response would be, ‘Based on today’s knowledge (standard) everything appears different to him, but the fact that this woman is so nice was his conviction (faith) he established on the eleventh mile (in his past life), which has come into fruition today, but today’s knowledge is different. That is why these conflicts occur.

These conflicts can never cease without the knowledge of a Gnani Purush. And this worldly life will continue to run this way. But I am showing you the root cause of it. Do you understand the root cause behind it? The world has been running its natural course from time immemorial. You are not doing anything in it; it is just a natural progression (of evolution of the self) that is doing this.  The law of this flow is what brings you into a state of doer-ship. And the belief of doer-ship is itself your egoism.

What does God say to all this today? One man takes bribes but while taking them, he questions himself as to why he does something so wrong.  While another man, who does not take bribes feels he should take them and makes the intent (bhaav) to do so, so God ‘catches’ him. ‘You are responsible (for making the bhaav to take bribes)’. Yes, he is going to become a thief. This man is going to perpetuate his worldly life.

Questioner: And the other person is being liberated.

Dadashri: Yes, he is being liberated. Therefore, law of nature is different. Things are not what they appear to be.

Do you understand what I am saying?