Learn how to deal with an Angry Wife

In married life, sooner or later, there may arise a situation when you have to handle your angry wife. Being emotionally closest to her, you strive to make her happy. However, it could be very difficult to handle a situation if it goes out of hand.

Usually, things that go out of control, start off as very minor difference of opinions or small misunderstandings. These can easily be solved with a little patience, open communication, and with a little humility towards each other. The best thing to do is to find a way to tactfully handle the troubled situation without getting frustrated. 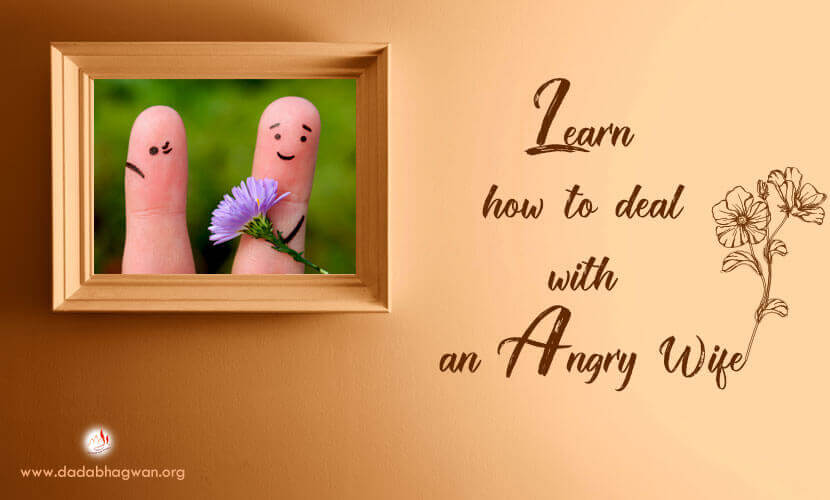 Say your wife has a quarrel with a neighbor and she is so enraged that she begins to yell at you as you enter your home. What should you do? Should you get angry also? When such events occur, you should adjust and carry on. You do not know who or what made her so furious. You are a man, so you should not allow a dispute to ensue. If she begins to argue with you, just calm her down. Conflict means differences of opinion.

Let’s take a look at how Atma Gnani Pujya Dadashri skillfully handled a situation so as to avoid a conflict with his wife.

Dadashri: Once I had a conflict with Hiraba (my wife). Even I became trapped in a difficult situation. I used to call my wife, ‘Hiraba’. As a Gnani Purush, I can either address women as, ‘Ba’ (mother: gesture of respect towards elderly ladies) or as ‘dikri’ (daughter). If you are interested, I can tell you. It is not a long story, just a short one.

Questioner: Yes, do tell us.

Dadashri: One day we had a conflict of opinions (“conflict” or “difference of opinion”). The mistake was mine; Hiraba was not at fault.

Questioner: She may have made the mistake, but you claim it was yours.

Dadashri: Yes, but it was not her mistake, it was mine. I am the one who does not want any conflict. She did not care whether a conflict took place or not and because I did, it is considered my mistake. If I do this (Dada hits the chair), does the chair get hurt or do I get hurt?

Dadashri: Therefore, it is up to me to understand. So anyway, one day there was a conflict and I got trapped. Hiraba told me that her brother’s eldest daughter was getting married and then asked me what we should give her as a gift. It would have been fine if she had not asked me. Whatever she wanted to give her would have been just fine and I would not have objected. However, when she asked me, I responded according to my intellect and said, “Rather than having new silverware made, why don’t you take one or two pieces of the silverware we have in the cupboard and give them as a gift?” Do you know what her reply was? In our house words like ‘mine’ and ‘yours’ are never used. Only the words ‘our’ or ‘ours’ are used. So she said, “When your uncle’s son got married, you gave huge silver plates.” Now on that day, she used the words ‘mine’ and ‘yours,’ when normally she would say ‘ours.’ She would never make the separation of ‘mine’ and ‘yours’. This was the first time. I thought to myself, “Today I am trapped!” I realized my mistake instantly, and looked for an opportunity to get out of the predicament. Now, how could I mend this damage? The bleeding had already started, so how could I apply the bandage in order to stop the bleeding?

So on that day ‘mine’ and ‘yours’ took place. The situation went so far, that she used the words, “Your uncle’s son,” rather than “Our nephew.” I realized that I had made a major mistake. That day I saw that I was about to take a fall, so I immediately corrected myself.  I turned the situation around quickly and completely. I told her, “I did not mean to say that! I am trying to say something else. There is a little misunderstanding on your part. I am not saying that.” Then when she asked me what I was trying to say, I replied, “Give her the silverware in addition to five hundred rupees. She could use the money!” In turn she replied, “You are so naive, how can you give so much?” At that point, I realized I had won over the situation. So then I told her, “You can give whatever you want to. All four of your nieces are like our own daughters.” At that point she became content! “You are truly divine,” she said.

Now let us learn how to deal with an angry wife and how to make wife happy with examples that Param Pujya Dadashri has given us:

Param Pujya Dadshri says, “When Salia’s wife asked him to buy meat, it was a dilemma. Since his wages were very minimal, how could the poor man afford to buy any meat? His wife had been telling him for over a month, that their poor children keep asking for mutton. Then one day the wife gets irritated, so he tells her that he will bring some meat that evening. He is always prepared with answers, because if he is not, she continues to nag at him. Upon her irritation, he immediately gave her a positive reply. “I will bring it today, I will bring it from wherever I have to,” he said. By saying this, he prevented a quarrel. Thinking that he would bring meat home that day, as he had said, she became furious and started yelling, when he walked in empty-handed. Being the shrewd man that he is, Salia was able to pacify his wife by saying, “Dear heart, only I know my problems, you would not understand.” In the same manner, Salia uttered a few more sentences and turned his wife around. Rather than continuing to yell, she told him that he could bring the meat another time, and not worry. After fifteen days or so, the same scenario occurred again, and again he pleaded his condition to her, making her happy in the end. By dealing with these situations in such a way, he never has to fight.”

Between the years of 1943 and 1944, Param Pujya Dada Bhagwan had a construction contract with the government. One evening, He visited the house of Ahmedmiya, a contract laborer who was the head bricklayer in the project. The following is Param Pujya Dadashri’s account of that evening.

He [Ahmedmiya] had only two rooms, one large room and the other as small as a bathroom. When I asked him about the rooms, he replied, “Sir, what can I do? This is more than enough for us poor people.” I then asked him where his wife slept. He said, “In this same room. You can call this a bedroom and a dinning room, this room is everything.” So I asked, “Ahmedmiya, don’t you ever fight with your wife?” He was amazed, “What are you asking? That never happens. I am not a foolish man.” “You must have a little discord?” I inquired. “Not with my wife,” he replied. I went on, “What if your wife gets angry sometimes?” He replied, “I say to her, ‘Beloved, outside that boss harasses me, and if you harass me here, what will become of me?’ and she in turn, calms down.” I replied, “Since there is no discord, there is no problem.” He then replied by asking me what would happen if there was discord. He asked, “Where would she sleep and where would I sleep? If this home had three levels, then I could go away to the third floor. But here, we both have to sleep in the same room. She faces one wall and I face the other wall, what fun is there in that? The whole night we would not be able to sleep, and where else would I go? This is why I do not make my wife unhappy at all, even if she were to beat me up. I fight with everyone outside the home, but not with my wife. You cannot do anything to your wife. If I get angry, I go and fight outside, but not at home.”

If we start to apply Ahmedmiya’s line of thought into our lives and not allow any conflict to take place in our married life and use his style of avoiding conflict with his wife to avoid conflict with our spouse, then we too can live a happy married life.

Say your wife gets upset and says, “I am not bringing you a plate of food upstairs anymore; you will have to come down and get it yourself. You are now well and able. You wander around and gossip with people, you smoke cigarettes, but when it is time for you to eat, you ask me to bring your plate up to you. I am not going to do that.” That is when you must say to her calmly, “Please fix me the plate, and I will come down and get it myself.” Even before she has a chance to say anything, just tell her that you are sorry and that you are coming. If you do this, you will sleep peacefully. Otherwise, your entire night will be ruined. Both of you will pout, you will sleep separately and not sleep well, and then in the morning, she will still be sulking when she serves you your breakfast. You will notice it right away. This life is full of conflicts and quarrels.”

2) When is one considered to have learnt to become a husband? It is when the wife continuously experiences veneration (respect) for him.


There is also a book on "Anger" - You can read it to understand how to overcome Anger.