Where Does the Soul Go Immediately after Death?

As soon as the Soul leaves the body, the body is declared dead. So, where does the Soul go immediately after death? The Soul then goes straight to its new destination where rebirth takes place. One’s belief in reincarnation, though, is supported only when one believes that Soul exists. Across all the phases of infinite lifetimes of birth and death, the Soul has remained in its own nature; it has been immortal. However, due to ignorance, in every birth, the Soul has no option but to accompany the body complex.

Let’s understand this process of where does the soul go after it leaves the body in detail in the words of Param Pujya Dadashri. 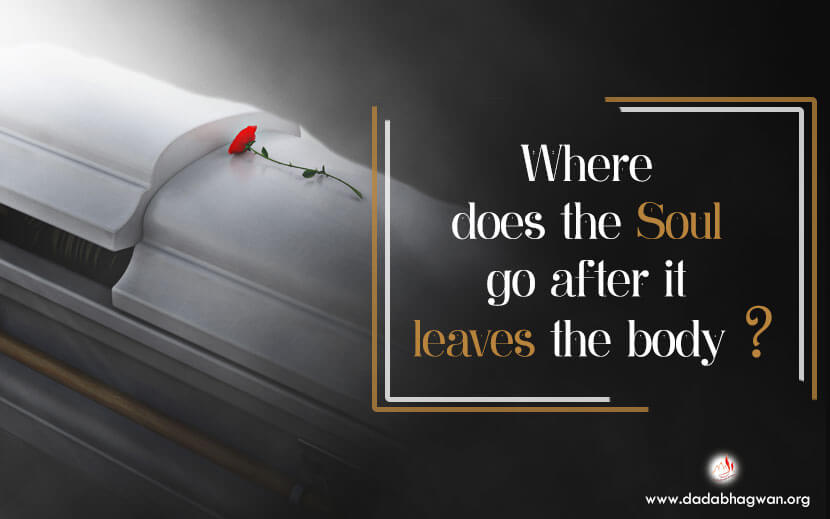 Questioner: When the body dies, where does the Soul go?

Dadashri: As soon as the Soul leaves the body, it goes straight to its destination; it acquires its place of creation, the womb.

Questioner: At the time of death, while leaving one body and before entering another body, where and for how long and how does it exist? How long does it take for the Soul to enter a new body?

Dadashri: It hardly takes any time. It is here in the body while it is leaving this body, and it is already present in a womb there (simultaneously). So, there is no time lag in this.

Questioner: When it leaves the body here, they say that one end of the Soul is here, while the other end can be somewhere in Punjab. How is that? Can you explain?

Dadashri: The Soul has the property of expansion and contraction; so, it can stretch as far as it wants to. It has to go where it has karmic ties, does it not? Do you think it is going to walk all the way there? It does not have legs and a gross body!

Questioner: So, can it live in two places at one time?

Dadashri: Yes. It can stretch as far as it has to go. So, when it begins to enter the new body over there, simultaneously it is leaving the body over here. Just as a snake leaves its burrow; part of it is outside and the other part is inside. It is similar to that!

Questioner: So how much time does it take to leave one body and acquire another (physical) body?

Dadashri: No time at all. Even while it is still leaving the body, it is over there in the womb as well. That is because there is timing involved, when the sperm and the ovum unite. When it is about to leave the body, first the union occurs over there. And once all that comes together, only then it leaves from here. If not, then it does not leave from here; because if it did leave, what would it (the living being) eat over there? It may reach the womb, but how would it sustain itself there? There is only the man’s sperm and the mother’s ovum, which it consumes out of hunger the moment it arrives. Once it has eaten, it develops into an embryo. Is this all not scientific circumstantial evidence?! If over there, the time is not yet right for it, over here the dying will linger on. You would say, ‘Why are you not leaving yet? Hurry up and go’. And it would say, ‘No, they are still not ready for me over there!’ It begins to leave from here when adjustments are made over there. And once it leaves from here, everything is methodical over there.

The Activity of Karma in and around This Entire Process

When the Soul leaves the body, it is accompanied by the karmas in the form of causal body. Based on the causal body, the Soul reaches its suitable destination and finds the mother’s womb where it resides. As the karmas from causal body begin to discharge one after another, the physical body grows in the womb. The baby is finally born and the entire life unfolds according to the causes (karmas) done in the past life. This is a scientific reply to where does the Soul go immediately after death.

While the discharge of the old karmas is happening; simultaneously, new karmas are getting charged. These karmas continue to form the new causal body, which along with the Soul and the electrical body, leaves from this life’s physical body at the time of death. Thus, at the time of death, once again, the same cycle repeats, as explained above.

The Role of Electrical Body in The Process