What is the Meaning of Soul?

By not being able to comprehend this subtlest and the most profound element in the universe, which is one’s real form as the Soul; one is surrounded by endless questions such as, “What is the meaning of Soul?,” “What Soul means,” “What must be the Soul like?,” “Is it in the form of light?” and “If so, how is its illumination like?”

The answers are there but you need to experience them by attaining the true Vision of Soul. This Vision that transcends all imaginations can be attained only from the Gnani Purush, the Enlightened One, who has already attained that Vision.

Until that Vision is attained, we can define Soul by knowing its properties and functions. So, let’s explore them! 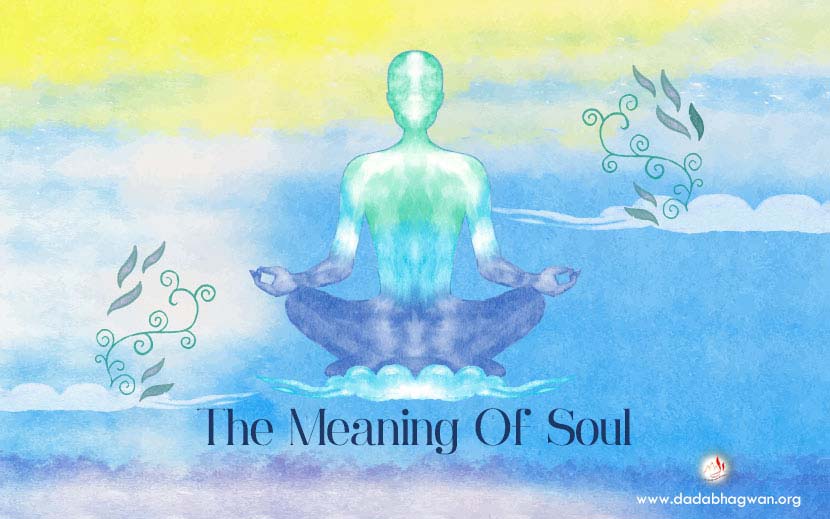 Soul is the Life Energy!

A body without Soul (once dead) implies that the body has no life, and hence, it is unable to feel happiness or pain. So, wherever there are sensations and emotions, there is knowledge of pain and happiness. Where there is a feeling or growth, it implies that there is Soul or life energy in that body.

Dadashri: Wherever there is feeling of any kind, therein lies the Soul, and decidedly there is life present there. Therefore, you should know that where there are feelings, life is present there. And if something does not show feelings, then it has no life and hence, it is without Soul (Anatma). Even trees and leaves have feelings.

Questioner: But a tree is a one-sensed organism?

Dadashri: One-sensed means it has only a feeling of touch, it expresses the feeling of touch. Every living entity has feelings. Those that have feelings clearly show the presence of Soul. It is not that one to whom feelings arise is itself the Soul; but where there arises a feeling, there, there is Soul. And where no feelings arise; there is no Soul there.

Dadashri: Now, what is Soul? It has no feelings or anything like that. The Soul is only in the form of light! But wherever there are feelings, we can find the Soul there.

Questioner: So, does it mean that Soul is the basis of feeling or where the feelings arise, in that place, the Soul is there?

Dadashri: If we say that the basis of feelings is Soul, it creates another problem. The feelings arise because of the presence of Soul! So wherever there is feeling, there is Soul.

Questioner: That which is expressed when the feeling arises, it’s not the Soul that has expressed, isn’t it?

Dadashri: It is the non-Self complex (comprising of the physical body, mind, intellect, ego, and chit as a component that visualizes) that gets expressed, but because there is the presence of the Soul there, these feelings arise, the pain arises.

Let us know about another characteristic to explore further about the meaning of soul.

Soul is an Element!

The Soul is an eternal element. The living beings that we see in various life-forms in the entire universe are nothing but the different phases of the Soul. The conversation below helps us understand what does this mean:

Dadashri: Is Soul an element or a non-element?

Dadashri: Whatever can be seen (is visible) - is it an element or a non-element?

Questioner: Since the Soul cannot be seen, it is a non-element. Elements are visible, aren’t they?

Soul is in the form of Soul only. As an element, the Soul is an abode of infinite properties! And every element, in substance, is accompanied with properties and phases. Anything in which there exists substance-property-phase is said to be an element. Element is eternal.

Soul too is an element: it has its own substance, its own properties and its own phases. And those phases arise, remain and pass away. Whatever we can see with the eyes, all of that is a non-element, it is temporary (will get destroyed). And the Soul is eternal; an element.

There are six such elements and the world is made up of these six elements. These six eternal elements are revolving around one another, constantly undergoing changes; and as a result, the phases are arising. It is because of these phases that this world is seen. In this world, only the phases are visible.

What does this element actually comprise of?

Soul Is in the Form of Knowledge and Bliss!

The Soul is made up of knowledge and bliss. This is another property that explains the meaning of soul. The Soul knows what all is happening. It understands the experience of pain and happiness. How does one know that this leg is aching and this one is not? One may argue that it is the nerve or the brain, which knows. However, who reads the brain?

The brain is only an organ and it exists in a dead body too, but a dead body is unable to know anything. So, there is something else required to know and understand things. When present in the body, a person is:

What is that thing? This will reveal another property to further explore the meaning of soul. Come, let’s understand it from Param Pujya Dadashri…

Dadashri: If at night, someone gives you shrikhand (sweet yoghurt pudding) in the dark, where would you put the shrikhand? Will it get into your eyes or will it go only into your mouth? Even if you were given shrikhand in pitch darkness, you would put it only in your mouth, isn’t it? And if someone asks you what you ate, what will you tell him?

Dadashri: And if one asks you what is in the shrikhand, what will you tell him?

Dadashri: Yes, and if the yogurt was slightly off, would you be able to tell?

Dadashri: And you would know even if it is good?

Dadashri: Would you know if there was less sugar in it?

Dadashri: Would you also know if there was too much sugar?

Dadashri: How can you know all this in pitch darkness? And would you know if there were raisins and nuts in it? If there was a small cardamom in it, would you know?

Dadashri: So, one that knows all of this is the Soul.

Questioner: People say that it is because of the sensory nerves that we perceive, and if there were not any sensory nerves, then we would not perceive.

Dadashri: Yes, if you did not have sensory nerves, you would not perceive things. But the Soul is the one that knows.

The inherent property of Soul is infinite knowledge, but it has got veiled by the layers of karma (layers of ignorance towards the Self).

These birds, no matter how far they fly, are able to return to their home. How does that happen? It is because there are some areas where layers of ignorance (deluding karma) on the Soul are not there at all. Even in human beings, a husband is able to recognize his wife and a wife is able to recognize her husband. This is because there are some portions of the Soul that never get covered (by karma). As and when some layers of ignorance break, that much Knowledge is revealed (in worldly life)!

Learn More about Your Soul; Explore the True Self Meaning

The Atma means the Self. You may say, “I am Chandubhai (you may insert your own name here).” However, Chandubhai is the name of the body. Should you not know ‘who am I’ in this body? It is that Self which you need to recognize...

As the Soul is your real Self, your curiosity to learn more about it is quite natural and justified. We are fortunate that today, we have amongst us Pujya Deepakbhai, the current Living Gnani, to whom we can directly ask all our questions regarding Soul. You will get a precise answer in a simple and lucid language that is easy to understand!!! For details, you may check out: schedule