Why not to hurt Foundation of any religion?

"Dearest Dada Bhagwan! Give me the infinite inner strength not to hurt, nor cause someone to hurt, nor encourage anyone to hurt, even to the slightest extent, the foundation of any religion.

Give me the infinite inner strength not to hurt even to the slightest extent, the foundation of any religion and give me the strength to conduct my speech, thoughts, and actions in a manner that is accepted by all." 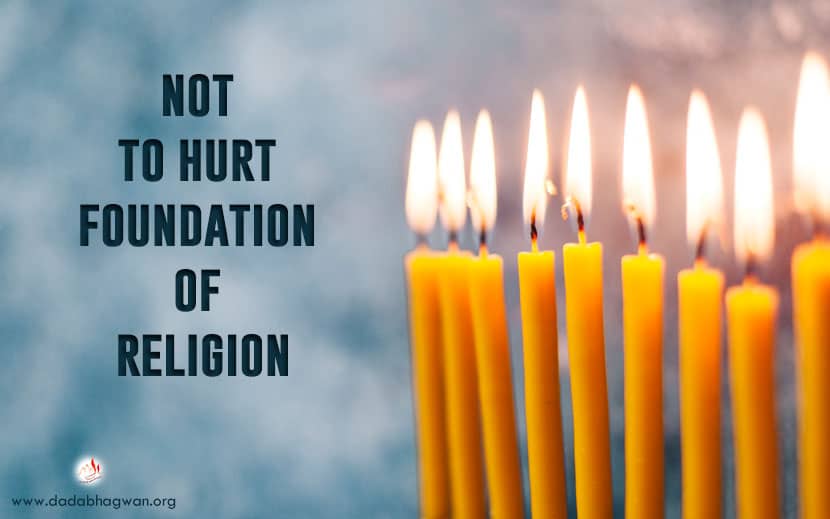 Dadashri: Then, 'two' is also a number, is it not?

Questioner: Yes, it is.

Dadashri: Do you know what those who are at '100', say? They say, "Our religion is right, yours is wrong." You should not say this. All religions are correct. Those at the level '1' are correct according to that level; those at level '2' are correct at that level etc. They are all correct according to their level. That level, which accepts all levels, is syaadvaad. To accept a thing in its totality is syaadvaad. To reject parts of it is wrong. The one who is at 360 degrees sees everyone as correct at their own degrees.

So we cannot say that Islam is wrong. Every religion is correct. We cannot tell anyone that his religion is wrong. How can we tell someone who eats meat that he is wrong? He will say that his religion allows eating meat. Therefore we cannot negate it. That is his belief and his conviction. We cannot hurt anyone's belief. However, if our own people eat meat, we should tell them gently that it is not good. We cannot object if they still want to continue doing it. We should explain to them that this is not going to help them.

Syaadvaad means not hurting the foundation of any religion. Whatever portion is true, can be called true and whatever portion is false, can be called false. That is what is meant by not hurting the foundation. One should not hurt the foundation of Christianity or Islam or any religion, because they are all contained within 360 degrees. The Real is at the center and all these others are relative views. For the one who at the center, all the relative views are correct.

This is the syaadvaad path. Every religion has to be accepted. We have to accept slaps from the other person because no one is at fault. If you see fault in someone, it is your own fault. Our intellect makes us see faults in others.


Syadvaad means no religions' foundation is hurt. It does not point out a 'direct' mistake of any religion.