What is the difference between Spirituality and Religion?

We often believe that religion means doing darshan, listening to discourses and performing rituals. However, just think about it - after doing them all, if not even a single fault of ours reduces in our entire lifetime, can that be called religion?

In today’s world, people are said to be religious merely by looking at their external activities, i.e., whether they are going to temple, doing puja and penance, performing rituals, keeping fasts and giving donations or not. However, it is one’s internal state, which is more important, i.e., what is the internal meditation like, what kind of anger, pride, deceit and greed are filled within, is there an intention of cheating and looting people, and so on ought to be checked. This is because it is what that determines one’s actual spiritual development! 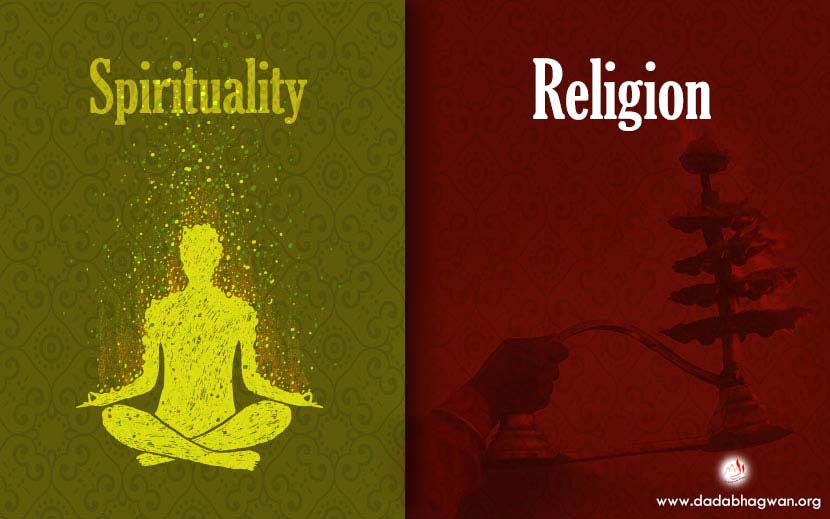 There are two types of religion:

The relative religion encompasses the religion of mind, speech and body. To refrain from doing bad deeds and to indulge in doing good deeds is religion. Religion holds us; it doesn’t allow us to slide down the graph of development.

However, spirituality is much more advanced than religion. A spiritual person not only has full control over mind, speech and body but also inspires others. The person never indulges in adverse meditation, as the only desire is to attain the Soul.

When the Soul comes into one’s vision, it is called the beginning of real religion. Vision means one can see. Only when one can see, can one progress. When one attains the enlightened vision (Samyak Darshan, Self-Realization) to see things as they are, one makes an entry into spirituality.

Spirituality helps lower one’s ego; it lowers intoxication of ‘I know’; whereas, the relative religion many a times increases it. When one becomes completely impartial towards one’s own ego; when he/she ‘sees’ every fault of himself/herself, even the faults at the subtlest level; then he is considered to be in the real religion. This is another difference between spirituality and religion.

Spirituality is the Path for Self-Realization

Spirituality is the total path for Self-realization. There is no doership and there are no religious rituals there. If you understand it properly, you can keep the awareness of the Pure Soul (real Self) and feel the separation from mind, speech and body all the time.

Through Akram Vignan, the stepless path to Self-realization, one is able to attain Self-realization directly from the Living Gnani, the Enlightened One!!! Gnani Purush makes the separation in just 2 hours. This is the vision of the Soul.

On this path of Akram Science, we are not required to leave our old religion and adopt some new religion. Whatever we are believing in, we can keep it as it is. There is no need to change our Guru or our religion; we may continue with whatever rituals we are doing.