Does Karma charge during the State of Meditation?

Actions Do Not Charge: Intentions Do

When these religious teachers do pratikraman, samayik, or give lectures, their conduct is their effect karma. It is the internal charging that is important. Their conduct today is all a discharge, of charge from the past life. Their entire external conduct is in the form of discharge. When people say that they did meditation or gave alms, they will reap the rewards of these actions in their present lifetime, but of what use is this for their next life? One may be doing samayik externally, but only God knows what is going on internally. 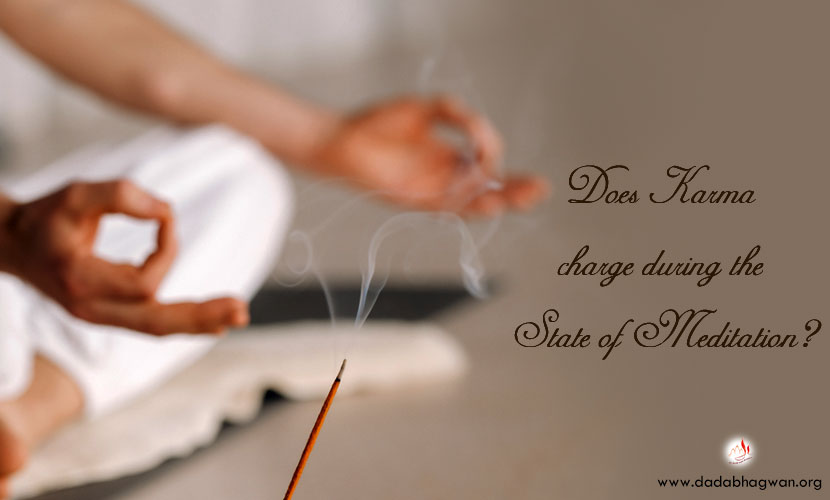 A man is doing samayik (introspective meditation) when someone calls for him at the door. The wife answers the door. She is asked where the husband is. The wife tells his visitor, "He has gone to the trash dumping ground." The man overhears this conversation and upon introspection he finds that his wife is correct. Internally he was indeed meditating and in his meditation, he had been visiting bad places. This is the causal karma, while on the outside he is doing samayik, an effect karma. It would be acceptable to be doing samayik internally even though externally it would not be evident.

Effect karma is when although you try to control your anger, the anger occurs. Does this happen or not?

Dadashri: The results of that anger will be there in this life. People may avoid you or slap you. You will be disgraced one way or another. To become angry is your effect karma, but it is your internal intent that is important. If from within you feel you had a right to be angry, this will create a new account for you to become angry again in your next life. But if your internal resolve is never to become angry, even though you do, you will not bind anything for the next life.

You will have to suffer the consequences of the overt visible effect karma of being angry, in this life, but you will not be causing anything for the next life, because you have the intent not to become angry. If, however you continue to think that you need to show your anger to people to keep them in line, then in your next life you will be an angry person. Therefore, the external action is overt effect karma, but during that time the internal intent, whatever it is, is cause karma.

If you understand just this much, there is no binding in overt karma. That is why I have put forward this science in a different light. Until now, people were brainwashed into believing that they were binding karmas because of their overt karma. This is why people have been wandering endlessly.