Do humans go only into another human form?

Questioner: Do humans go only into another human form? 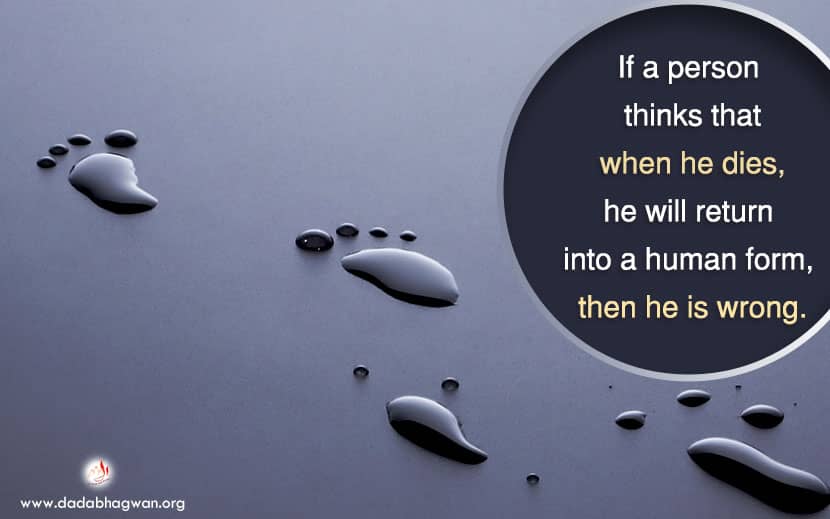 Dadashri: No, you are mistaken. But only a human can be born from a woman's womb. A donkey cannot take birth there. If a person thinks that when he dies, he will return into a human form, then he is wrong. The fool! If his thinking is comparable to that of a donkey, how is he going to be born as a human again? The thoughts he has about depriving others, and coveting other people's possessions, will all lead him to the lower life form.

Dadashri: Once born as a human in Hindustan, one has to move around in the four different life forms: human, celestial, animal and hell. Foreigners, who do not believe in reincarnation, are not subject to this, with the exception of about two to five percent of the people. They are only going higher.

Questioner: When people refer to Vidhata, whom do they refer to?

Dadashri: It is nature that they call Vidhata. There is no such goddess called Vidhata. Scientific circumstantial evidence is Vidhata. People believe that on the sixth day after the birth of a baby, Vidhata comes and writes the future life of he newborn infant. This is correct by their imagination, but not according to facts.

In reality and according to nature's law, if you deprive others of things that you have no right to, then you will go into the animal form. But even that is not a permanent state. At the most, it will be for duration of two hundred years or at least for seven to eight lives before being born as a human. Sometimes it may even be for as little as five minutes in the animal form before he returns into the human form. There are some organisms that in a span of one minute will change seventeen life forms. Therefore not everyone will spend the maximum time of two hundred years in the animal form.