There are two main causes of wet dreams: 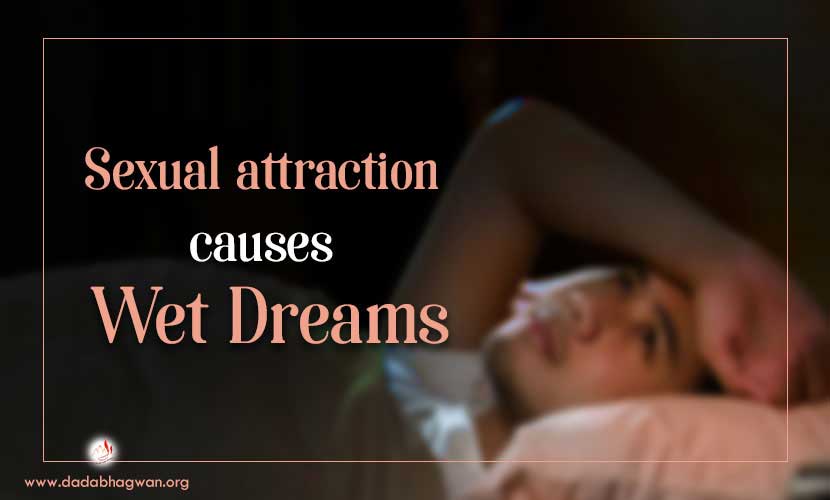 Let us explore how subtle sexual attraction causes wet dreams and how to stop wet dreams as explained by Param Pujya Dadashri:

When the vow of brahmacharya has been taken and something unusual happens, then one becomes uneasy and confused. One boy was uneasy so I asked him, “Why are you so uneasy?” He told me that he was too shy to tell me so I told him to write it on a piece of paper and give to me. He said, “I have wet dreams two to three times a month.” I told him, “Oh you silly boy, why are you so scared of telling me just this? You do not intend for it to happen, do you?” He told me emphatically that it was not his intention. I informed him that if his intentions were pure, then it is still considered brahmacharya. He wanted to know why it should happen. I asked him if it was not just an emptying of what had being filled. Whatever had filled would be discharged. Make sure that your intent does not spoil in this. Preserve a pure intent. Do not believe that there is pleasure and happiness in this discharge. If anyone gets confused and uneasy, I would clarify it right away.

Questioner: Intention is the main thing. The whole thing is based on ‘what his intention is’.

Dadashri: Where does your intention lie? If your intention is not good, and discharge does not occur, that does not mean that you will become a celibate. The Lord was very smart, who would explain to you in this way? And nature will always be within its rules. Does it mean that you are going to die, just because you vomited? If there is a body, if vomit does not occur, then what will? Even if you set it right everyday, is vomit not likely to occur again?

Questioner: Recently, the last few times it has fallen increasingly; the discharge had occurred.

Dadashri: However much your chit is stuck in something, that much discharge has occurred automatically with in that; it then flows out. It becomes lifeless and discharges. That which has not become lifeless will not leave.

Questioner: No, it means that the chit is still getting stuck somewhere in that.

Dadashri: Yes, it is not stuck. Some of it may be getting stuck within and this is the result of it. Remove it all after it gets stuck by doing pratikraman this way. It will stick a little, won’t it? So if it does get stuck, the rule is that all that within, separates immediately and then it becomes lifeless. Instead of it remaining within, if it leaves; do not object to it.

Param Pujya Dadashri says that overeating in the evening causes wet dreams so let us understand the fact about how to stop wet dreams in His own words:

Questioner: Due to our intent towards celibacy, we do not like any dreams related to women, so is there a solution for that?

Questioner: Why do wet dreams occur?

Dadashri: If there is a tank of water and the water starts dripping then would you not understand that an overflow is occurring? A wet dream is an overflow. When a tank overflows, should you not have a natural outlet?

So if you control what you eat, you will not have wet dreams. That is why these sadhus eat only once a day. They do not take anything else, such as tea.

Dadashri: Yes. You do not need an evening meal at all. This maharaj here has only one meal a day. But he eats four rotlis; he is an adult, is he not? Then he does not drink tea, there is no other problem. He has filled up the tank for the day and that ‘fuel’ will last him the whole day.

Hence, as far as discharge is concerned, nothing will happen if one controls what he eats. But one keeps stuffing himself with food. Whatever food he finds and when one eats improper food, what will happen? How wise is a Jain! He does not eat in this manner. Even then there is no problem in the loss of semen in a wet dream. The Lord has said this too. The force of a full tank will pop out the cork below. Until brahmacharya takes hold, the semen will drain for sure. The rise in the energy of the semen begins with the vow of brahmacharya.


1) It has been prevalent among the mass of people that the discharge of semen is a natural function of the body-complex. It is not a leakage. What the viewpoint of the Gnani’s knowledge says is that the spoiled vision and spoiled thoughts of the person is why a certain part of virility is considered as ‘exhausted’. It will then get discharged.