Does God forgive me for my wrongdoings or does God punish?

Does God punish us when we do something wrong?

If a person were to steal today, his action of stealing would be the visible karma. The fruit of this karma will come in this lifetime itself; he will be disgraced and punished.

But it is not God who punishes him!

God never imposes any punishment on anyone, nor does He reward anyone. The punishment or reward that we receive is all a result of our own karmas (causes). And this result is given to us by Nature.

The dispenser of justice in this world is this mechanical, non-living entity i.e. Nature, whose laws are such that, we automatically get the effect of the karmas that we have bound. If we have bound bad karmas, we have to suffer. And if we have bound good karmas, we experience happiness. This is how the law of Nature regulates the world. Not even for a single moment does the world remain without regulation.

For God, there is no such thing as right or wrong, good or bad; therefore God never interferes in any of this at all. However, believing God to be the Higher Authority who punishes us when we are guilty; we tend to live in fear of God. Rather than fearing God, we should instead fear committing mistakes, for which we have to suffer and bear the punishment.

Then why do people advise us that, ‘One should fear God’?

To answer this question, let us understand what it means to fear God:

What does it mean to fear God?

To fear God means to maintain healthy respect for God, which is good, because it brings forth a sincere commitment to obey His words and to follow the path He has shown. Although it seems that one fears God, his fear actually denotes his immense reverence towards God. It displays his wish to live life as per God’s wishes and not according to his own whims and fancies. It also denotes how dearly he wants to please God, whom he loves the most; and therefore fears offending Him in any way. 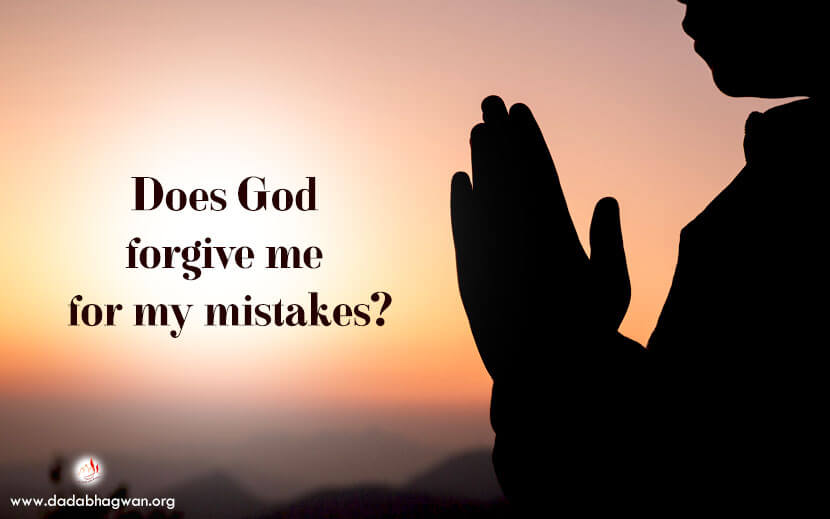 Does God forgive me for my mistakes?

No matter how careful we are, we make mistakes. However, God does not have to forgive us because He never sees anyone as right or wrong. God is the Pure Soul residing within every living being, who impartially Knows and sees everything, that is all!

But do you know that by adopting the 3-step approach of asking for forgiveness by doing pratikraman, in the witness of God, we can get rid of the very roots of our mistakes that bring us suffering?

Let us see how…

Say a person were to steal today. Now, not defending or hiding his mistake before God, if he, with a pure intention:

doing this, his old opinion that, ‘There is nothing wrong in stealing,’ begins to change to that of, ‘Stealing is wrong.’

Any mistake that is made, is a result of a wrong opinion. To change an opinion is the greatest achievement. Once the opinion changes completely within the person, then that person ceases to be Nature’s offender, and therefore Nature will not punish him.

Pratikraman helps destroy the ‘root of our demerit karma’ (i.e. our opinion) that resulted in us committing this mistake. When the root is destroyed, it means that we will not make such a mistake again.

So, when we make a mistake, instead of becoming afraid, if we choose to immediately do pratikraman, then even a massive karma will become as though it were a burnt rope that crumbles and disperses at the slightest touch. Whereas if we fail to do pratikraman, we will continue to bind more and more bad karmas and keep getting punished. The choice is simply ours!