There is a religious belief that:

'Brahma, Vishnu and Mahesh collectively created the world.
Brahma is the creator, Vishnu is the administrator and Mahesh is the destroyer.' 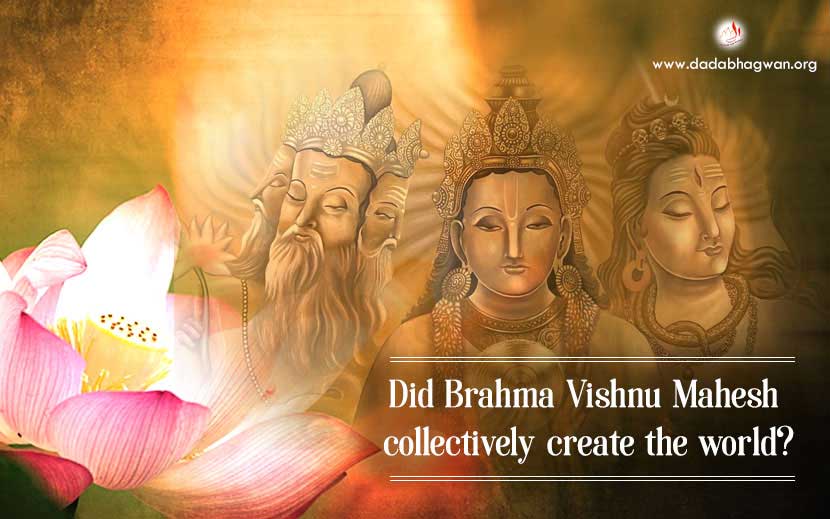 So what are the facts? Has the world really been created by Brahma, Vishnu and Mahesh?

The fact is that the names Brahma, Vishnu and Mahesh represent the three natural attributes of the prakruti (inherent qualities), which are present in every individual:

Every living being has prakruti and the prakruti is made of inanimate matter.

The three identities namely Brahma, Vishnu and Mahesh were created as the symbolic representations to help people learn the properties of the three attributes:

This placement is very scientific and has good depth in it. However, the metaphor that was created merely for the ease of our understanding; down the line was misinterpreted as the symbols which represent individuals by the name of Brahma, Vishnu and Mahesh. Not only were their idols established, but people started worshipping them too.

Just think about it...

If we were to look for Brahma would we find him anywhere in the world? No.
Can Vishnu be found? No.
Nor can Mahesh!

There is no one up there in the sky or the heavens, running this world. No one by the name of Brahma has sculpted the world, nor has there been a need for someone to sculpt it.

If this world was indeed God’s creation, wouldn’t it have been perfectly beautiful in all respects and at all times?

But this is not so…

The world has an ugly side too! There are worries, fear, miseries, tears, illnesses, pain, agony and endless suffering across the world.

By calling God the ‘creator’ of such a world, we are making Him the ‘creator’ of the worries and miseries too. Unintentionally we are holding God responsible for all the suffering that we see in the world. Why would God create such a world and take on such a grave liability?

Truly speaking, this world has no creator!

Out of ignorance, we have nurtured numerous wrong beliefs. But as we enter the spiritual sphere, we start understanding the real facts of this world.