What is true religion according to Bhagwat Geeta?

Of Which Religion Should One Take Shelter?

Questioner: All the religions say, “Come under my shelter,” so whose shelter should a living being take? 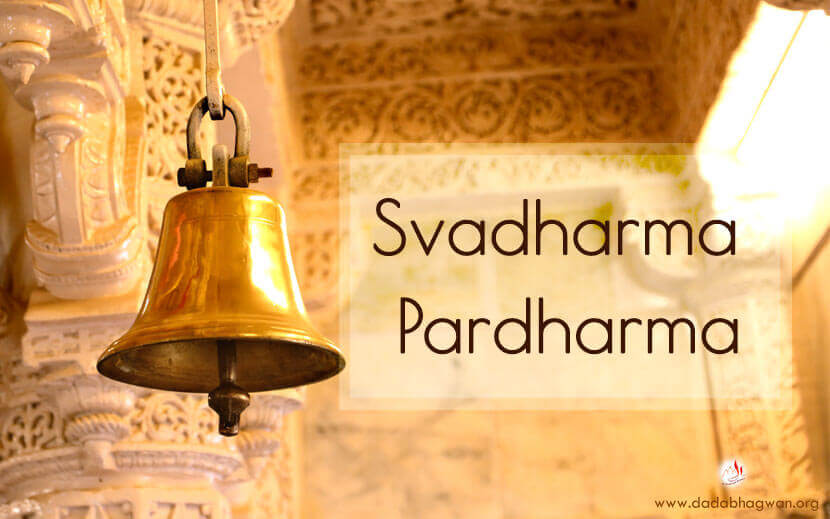 Questioner: What is swa-dharma? The Vaishnav religion tells us to remain in swa-dharma and not to go to pardharma.

Dadashri: Our people have not understood the word swa-dharma at all. They think swa-dharma is the Vaishnav religion and par-dharma is all other religions such as Shaivism, Jainism etc. Lord Krishna said, “Par-dharma bhayavaha,” People understood this to mean, ‘There is danger in practicing any religion other than the Vaishnav religion.’ All the other religions too say that par-dharma means there is danger in other religions, but no one understands the true meaning of swadharma or par-dharma. Par-dharma means dharma of the non-self, the body complex, prakruti, and swa-dharma is the dharma of the Self. Washing and bathing the body, making it fast etc., are all religions of the body; it is par-dharma. There is no swa-dharma in that. The Self is your natural state (swaroop). Lord Krishna had said, “The religion of the Self is swa-dharma and any other activities such as fasting or penance are activities of the non-self. There is nothing of the Self in them.”

“Dharma i.e. religion is when an element or anything reverts to its original nature-state.”

To comprehend this scientifically, gold is gold when it has the properties of gold. Polished or gold plated brass may look like gold but it can never become gold. Similarly, when an element is in its own property (state), then it has attained its own religion (dharma). Therefore, an element cannot be different from its property. When the Soul remains in its own properties (swa-bhaav i.e. its inherent state) and becomes stable in its own Self, it can be said that the Soul is in its own religion. This verily is what the omniscient Lord has called religion of the Self, (swadharma), the real religion.