What are the qualities of an Acharya?

So far we have discussed two, what's next? 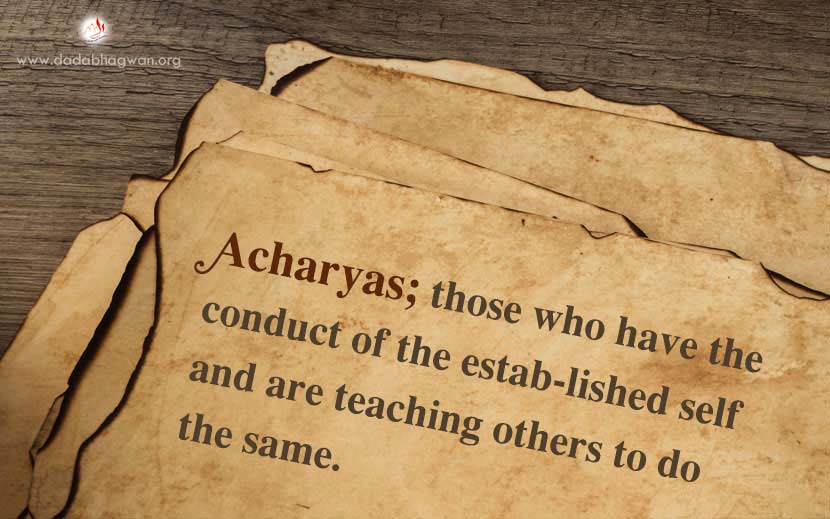 Dadashri: This obeisance is for the acharyas. Aacharyas are those who observe the principles laid down by the arihants and who teach others to do the same. To such acharyas, I pay my obeisances. Acharyas are Self-realized and their self-control is spontaneous. Self-control in them means they do not react to the existence of anger, pride, deceit and greed. But these socalled acharyas that we refer to nowadays cannot be considered under this obeisance of 'namo ayariayanam.' If we were to insult them in any way, they too would retaliate and lash back. They have not attained the enlightened world view yet (not Self realized). Theirs is the worldly view only. We are not talking about such acharyas. Self-realization, Atma gnan must be there before one is called an acharya here.

Therefore here we are not talking about the traditional Jain or Vaishnav acharyas that are around. We are paying obeisance to the acharyas who have no desire for any kind of worldly happiness and who are following the conduct for progressing on the path of liberation of the vitarag Lords. They observe these codes of conduct and teach the same for others. To such a being I bow. Do you have any objection to that? Whoever he may be or of whatever sect he may belong to, as long as he is self realized, to him I bow.

Such acharyas do not exist here in our world today, but they do exist in other worlds. And therefore this obeisance will reach them wherever they are in the universe. This in turn benefits us instantly.