What is the meaning of Tri Mantra and what is the benefit of reciting them?

Tri Mantra includes the mantras of Jain, Vasudev and Shiva. Tri Mantra is impartial and so it is for all people of India. If we recite these mantras it will benefit us greatly. This mantra teaches us to pay homage to many great men of Souls with highest elevation. So, let’s understand the meaning of Tri Mantra. 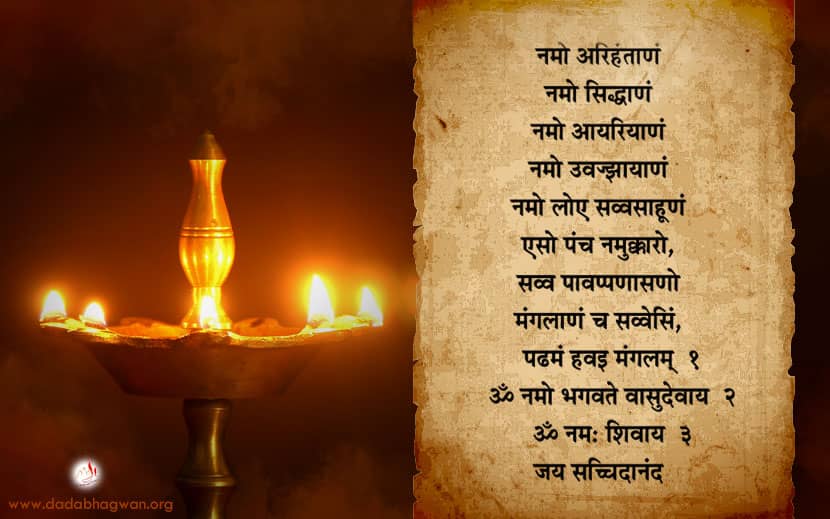 Namo Arihantanan – I bow to those who have annihilated their enemies. The one who is free from anger, pride, illusory attachments (Self ignorance), greed, attachments and abhorrence is called Arihant. He is called Arihant from the time He overcomes these enemies until the time He reaches ultimate liberation. That absolute state/form is called God. He can be from any religion, Hindu or Jain, he can be of any caste, he can be anywhere in this universe, but wherever this Arihant God is, I bow down to him. Lord Simandhar Swami is an Arihant God.

Namo Siddhanam – I bow to the one who has attained the final/ultimate liberation and He does not have a body and will not have a body in the future. He is in the realm of the absolutely liberated Souls who have attained the ultimate liberation and is continuously in the absolute state of the Self. I bow to such an absolute liberated God. Lord Ramchandraji, Lord Rushabhdev, and Lord Mahavir are called such absolutely liberated lords.

Namo Aayariyanam – I bow to the person who lives by the conducts specified by Arihant lords, and has others follow the same conducts.  He Himself has attained the Self, the state of the Self has manifested within him just like Shrimadji and Param Pujya Dada Bhagwan.

Namo Uvazzayanam – I bow to the one who has attained the Self and the one who studies the scriptures after knowing the Self, then teaches others. Upadhyay means he knows the Self, knows the duty, knows all the conducts as well, but he has some conducts and not others. Because he doesn’t have all the conducts, he is in the state of Upadhyay. He is still studying and teaching others. Self-Realized Pujya Niruma and Pujyashree Deepakbhai would fall into this category of Upadhyay.

Eso Pancha Namukkaro – the above five salutations that were performed.

Saava Paavappanasano – They are able to burn all the demerit karmas. By reciting this, all the karmas will be burned to ashes.

Om Namo Bhagavate Vasudevaya -  Vasudev Bhagwan, I bow to the one who became God from an ordinary human being. Who is the Vasudev for this time cycle? It is Lord Krishna. So, this salutation reaches Lord Krishna. It reaches the celestial beings (dev/devis) who protects Him.

Om Namah Shivaaya– In this world, all those who are living and have attained salvation, who no longer have ego, are called Shiv. Shiv himself is eternally blessed. I bow to those who have attained eternal blessing/salvation and shows others the way to attain the same. This salutation will reach all the Self Realized Souls.

What is the benefit of Reciting the Tri Mantra?

All of these three mantras are such that it will benefit the person who recites them, regardless if he understands them or not.

But the one who understands them will benefit more, and the one who doesn’t understand them, will only benefit as much as he recites verbally.

While reciting Namo Arihantanam, it is not necessary to visualize any colors. And if you really want to visualize something, then close your eyes and you should visualize each syllable of the mantra NA..MO..A..RI..HAN..TA..NAM like this. You will receive great results from this. Go to a place where you can be alone and shout it out with loud strong voice. You will benefit greatly from saying it loudly, because until you speak loudly, the internal machinery will not shut down. You will not receive the results until you reach to one pointedness, so speak loudly.  If you speak loudly, the mind will stop and intellect will dissolve.

Dada Bhagwan has said that if you can recite this given mantra in the morning 5 times while visualizing Dada’s face, you will never drown, and slowly, slowly will get freedom from worldly misery and get final liberation. Dada will take the liability for this.

In the worldly life there are all types of interactions, so reciting these mantras will reduce the impact of any upcoming externally induced problems and resultant suffering. Even then, the externally induced problems will occur as an instrument in the process of unfolding karmas, but if you were going to get hit by a big stone, it will hurt as much as a grain of sand would.

Dada Bhagwan has said that these given Tri Mantras have unbelievable amount of energy. All celestial beings will be happy and no obstacles will come. They are completely impartial and non-sectarian.


If you have a lot of problems, then you should recite Trimantra for an hour; you will find that the burden of your difficulties is significantly reduced.
Dadashri asks us to recite it (Trimantra) five times with full awareness every morning & night.
When you encounter difficulties in your business, you should recite the mantra for half an hour or an hour at a time. You should complete the whole forty eight minutes if possible.