Is positivity the side of God?

Positive line is the side of God

Questioner: Can a person with negativity become an atheist (nastic)? 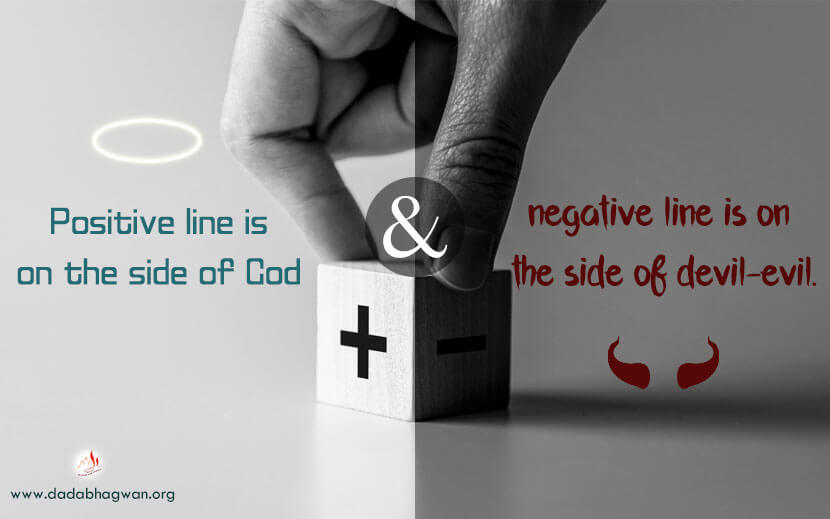 Questioner:  One can write a small book but not a big book.

Dadashri: No, there is so much description (vivaran) that one can write a big book even if one is having a good time.

Questioner:  But Dada, what you are saying that this is positive, is it the opposite of negative? Are you talking about the dual nature of positive and negative?

Dadashri: Both are in duality against each other. When one is there, then the other is there, that is called duality. One is opposite (pratikari) in this, that is called duality. But in reality everything is in duality only. However we understand easily that, this person uttered this talk which is positive and this person uttered this talk which is negative. Can we not understand such difference?

Questioner: Yes, but we can understand this duality through intellect.

The Lord has said that in these times, if someone insults you, you should invite him for dinner. Even if he has a ‘wild’ temperament, you should still forgive him. If you tried to get ‘revenge’, you will be pulled back into the worldly life (sansar) again. You must not take ‘revenge’ in this age. There is nothing but ‘wildness’ in this Dushamkaal (the present era). You can never tell what kind of thoughts you will have. You will even have thoughts about the end of the world! In this age, so many jiva (living beings) are going to collide with each other. And if you create enmity with such people, you too will have to collide. That is why we say, “I salute you sir!” In this time cycle, it is best that you instantly forgive someone, or else you will have to suffer. And this world is founded on vengeance (veyr).

In this age, it is impossible for you to go and reason with someone. And if you are capable of making others understand, then you can explain to them using good words, so that even if it does get ‘recorded’, you are not held accountable. So stay ‘positive’. In this world, only the ‘positive’ will give you happiness; the ‘negative’ will give you nothing but a great deal of grief (dukh). Can you imagine the magnitude of liability! Those who go about looking for justice and injustice will insult and give abuse to so many people. It is not worth looking for justice and injustice. Justice and injustice is a “thermometer” (gauge) for the world, to assess whose “fever” has come down by how much, and by how much has it gone up? The world will never become just, nor will it ever become unjust. The same corrupted mess will continue on.

The world has been like this ever since it began. In Satyug (Time cycle of unity in mind, speech and actions), the environment was not so spoilt, but today, its effect is worse. Don’t you think, that in the days of Lord Rama, when there were kidnappers who abducted Sita (His wife), that they would not be around today? This is never-ending. This ‘machinery’ has been like this from the very beginning. One has no insight, one has no idea about his responsibility, so do not say anything irresponsible. Do not act irresponsibly or do anything irresponsible. Take everything positively. If you want to do something good for someone, then go and do it. But do not do things that are bad, and do not have bad thoughts. Do not listen to anything bad about someone. It is very risky. Otherwise, in this huge and vast world, moksha lies right there within you, and yet you cannot find it!!! And besides, you have been wandering for countless births!!!

In ordinary worldly interaction (vyavahar), speaking is not a problem. But when you say anything negative about a human being, it gets ‘recorded’ inside him! If you want to record a ‘tape’ of those in sansar (people), how long does it take? If you provoke someone even slightly, it will create the provocation and a hostile intent (pratipakshi bhaav) will continue to be ‘taped’ (recorded). ‘You have so much weakness in you, that even before provocation, you will start speaking.’

Questioner: Let alone not saying anything negative, we should not even have a negative inner intent (bhaav), right?

Dadashri: You should not have that kind of bhaav, that is true. Whatever enters your bhaav, will inevitably come out in your speech. Therefore, to stop speaking, will also stop the bhaav. This bhaav is an echo behind the speech. There is no way to prevent a bhaav of hostility (pratipakshi bhaav) from surfacing now, is there! I do not have such bhaav. You have to also reach that state. That weakness of yours needs to go, so that the hostile bhaavs do not arise. And should they arise at times, you have the weapon of pratikraman, with which you will be able to erase them. If water seeps into your factory, as long as it does not freeze over, it is fine. If it does freeze, then it is out of your hands.


That any kind of egoism, whether positive or negative, is harmful for our spiritual progress. Read here to know about how to become free from Egoism.