What are the consequences of illicit sex and adultery in marriage?

Unknown Facts about Illicit Sex and Adultery in Marriage:

The world remains in the dark even today, about the grave dangers that exist in indulging in illicit sex and sexual infidelity. Param Pujya Dada Bhagwan has disclosed these dangers to open people’s eyes up to the reality. These are the facts:

The moment one has a thought about having illicit sex, he is headed for a life in the animal kingdom. One thinks in his mind, ‘What is possibly going to happen to me?’ And that is why people do not have any fear. But this world is a factory of fear, therefore be careful when you tread. This is a dangerous era of moral and spiritual decline. Day by day, the time is continuing to degrade; thoughts and everything else will continue to go bad. Therefore, if you talk about going to moksha, then you will get somewhere. That is why wise men practiced brahmacharya and got out of it by attaining liberation. 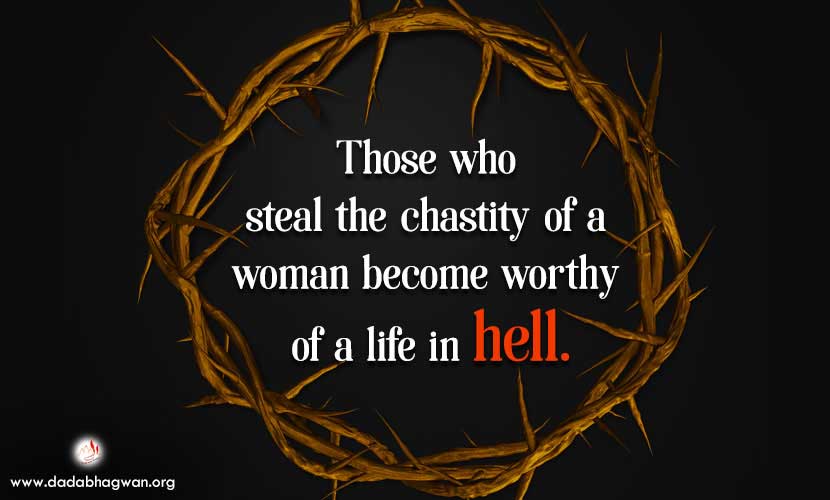 Questioner: Who are most likely to go to hell?

Dadashri: Rapists go to the seventh hell. As much pleasure he derives from his actions, the misery and pain that he suffers is infinitely greater and that is when he will decide that he does not want to go there anymore. Therefore, in this world if there is anything that you most definitely should not do, it is to rape someone. Never allow your intentions to be tainted sexually. One who rapes goes to hell and has nothing but constant suffering there. In this world there is nothing higher than a woman’s chastity.

Free yourself with True Repentance

For the one who has already taken on this grave liability by participating in illicit sex, but wants to come out of this grave liability, there is a way out. Through the heart-felt confession of the mistake (alochana) to a living Gnani Purush. A Gnani Purush is completely pure in all the way and is completely free from sexuality. Furthermore, He has no selfish interests or motives behind helping you to come out of your mistakes. Therefore, you can rest assured that He never discloses anything to anyone else. Only a living Gnani Purush can show you the way out, but you have to have a clear mind, be truly repentant and have an unshakeable conviction that you will never repeat your mistake again.

Param Pujya Dadashri says, “If you burn your sins in repentance even then your bad deeds would end. After listening to all this, if you were to ask me, "What would happen to me?" I would reassure you that I would help you. There are conditions. You have to wise up from today. From the moment you become aware of your mistake and do pratikramans with sincerity. I will show you what to do next. Then it would all disappear and I would do many other vidhis, special blessings, for you.”

Questioner: There are people who come to you to do alochana of their past mistakes. Do you help them become free?