Is practicing celibacy and living a celibate life possible for married people?

Practicing celibacy is considered very difficult in such a Kaal—current time cycle of kaliyug, yet in this time, the absolutely revered Gnani Purush Dadashri Himself practiced brahmacharya and he has been able to give the right understanding about it to others and thus let them practice it without putting much emphasis on sex control. Pujya Dadashri has explained such steps to married people that to bring about changes in conduct is an effect, a result, yet one can change the underlying understanding which will gradually bring changes in outer action. He assures with a guarantee that in this day and age sexual relation with only the spouse is considered brahmacharya ie. living a celibate life. So then why should not married people get the understanding according to Gnani’s vision and attain the goal of brahmacharya? 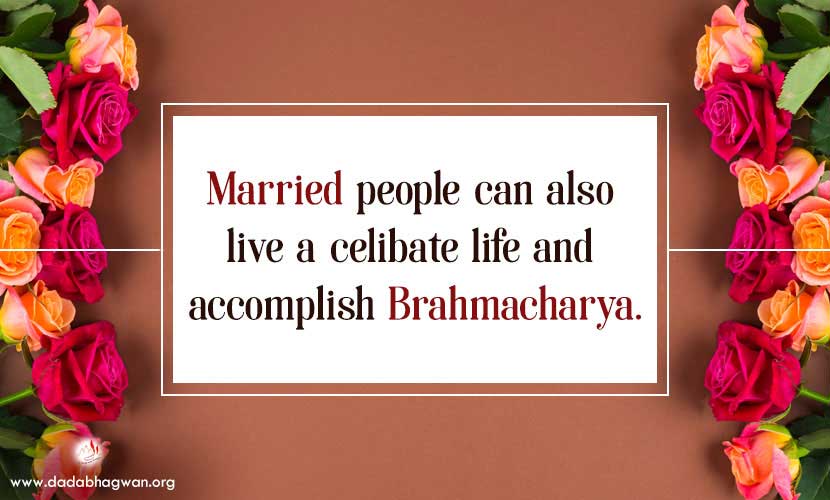 Sexual relation, you have to maintain mutually with your wife through a satisfactory solution. Maintain your interaction in such way that your satisfaction and her satisfaction both should be taken care of. If she is not satisfied and you are satisfied then stop such interactions. This is ‘Akram Vignan’! Live with a woman. Today all scriptures say not to live with a woman at all, however He (Param Pujya Dadashri) is telling you to live with a woman. But along with this ‘He’ is giving this thermometer that you should carry out sexual interactions in such a way that it does not hurt your wife.

One has to marry to progress in religion. Hence, you can both stay together, and progress together. Instead, the focus is now on sexuality. There is no problem if one has a wife but there is no sexuality (not having sexual relationship). Yes, our saints and ascetics did marry, didn’t they? They would have one or two; they would have one son and one daughter, that’s it, no more. After that friendship, they lived as friends. If the marriage today was for having one son or one daughter, then it’s not a problem. Then they live like friends. But they look for happiness in sexual interactions and that is the root cause of all the problems.

What ‘Gnani Purush’ says about the rightful sensual pleasures (sexual relationship with one’s own spouse) is that sex is like a ‘sweet medicine’; it is in the ‘medicinal form’ therefore it should not be taken daily. Both must have the ‘fever’, and that too only when that ‘fever’ becomes intolerable, can the ‘medicine’ be taken. Otherwise, if one keeps on taking the medicine because it is sweet, this same medicine will become poison and then the ‘doctor’ will not be responsible! Moreover, one’s involvement in sensual pleasures should be with the same helplessness and disgust in a situation where if a policeman were to capture him, starve him for four days, beat him up and make him eat meat; he would eat the meat but only under coercion.

The married life shines when both partners have the fever and they drink the medicine. If they drink the medicine without one of them having the fever then the married life will not shine. Drink medicine only when both have the fever. This is the only medicine. If medicine is sweet it doesn’t mean it should be taken every day. To make the married life shine one needs a saiyami purush (one who has control over passions). All these animals are called asaiyami. We want saiyami! All these people who were there, Lord Ram and others, all those men had saiyam (control over their passions). Saiyami towards the wife (with a woman)! So this asaiyam, is it any divine trait (quality)? No. This is a beastly trait (quality). It is not like that in humans. Humans should not become asaiyami. The world indeed has no understanding at all of what sexuality is and how to control sex! In just one sexual act hundreds of thousands jivas (life forms) die, in just one time, so because there is no understanding they believe this to be pleasurable. They don’t understand, do they! It should be such that the jeev (lifeforms) die as a last resort. But what happens when there is no understanding on practicing celibacy?

If a married couple were to take a vow of celibacy (brahmacharya), then they would completely understand the bliss of the Self. Otherwise, they would not be able to tell whether their happiness came from sexual gratification or from the pure Soul. Those, who have taken a vow of brahmacharya, experience eternal bliss of the Self within. Their mind and body remain healthy. And if this married couple have the knowledge of the Self through Akram Vignan, then they will more easily be able to practice celibacy.


If one stays away from having sex with a woman for six to twelve months then only he will awake and realize. People are not conscious-aware at all. The whole day long one roams around intoxicated with the effects and further plans of sexual interaction. That is why I am saying to followers (those who are Self-Realized), do something or the other for at least six to twelve months. Where is your loss or problem in this? Some followers made a mental decision too, and put it on trial as well, and if all followers try it out, what a great accomplishment would it be for them as human beings! Now you have attained this special tool for moksha. One is free to enjoy everything else, except sex. The Lord has described sexuality and its consequences in great detail. If one listens to the endless horrors and pains of consequences of sexuality, in its totality, he will literally die!

Questioner: Is it in our control to just drink only that much medicine? What should one do if he cannot control that dose?

Dadashri: Nothing is going to remain in control. There is indeed nothing in this world that cannot be in control. But what is the point of keeping on drinking the medicine just because it is sweet? So woman is not at fault, there is no fault of the fever, (but) when you drink the medicine when there is no fever, that is the fault. So understand all these dangers. Our talk is with surety and it is a talk which comes into experience immediately! And if it is this simple (easy) then you should follow it, shouldn’t you? Or is there any problem in this?

Questioner: We want to rise higher [progress spiritually] so we do indeed want to follow that!

Dadashri: If you have a fever then drink it. This is the work of only a wise man, isn’t it? So you have this thermometer from me. That is why, do ‘we’ not say that ‘we’ have given you moksha while also having a wife. Nobody has given it this straightforward! A very simple and straightforward path has been laid out. Now you make as good a use of it as you see it beneficial! Extremely easy (simple)! This has never happened! This is a pure path, the path that even God would accept.