How much inheritance for your children?

You should spend well and not keep too much aside for your children regardless of how much they expect in terms of inheritance from parents. Once you fulfill your duty to educate them and give them a good upbringing and when they are well established, you don't need to provide them with financial support. You need to keep this in mind while deciding how much money can I give my children. Remember that, yours is only what comes with you (your karmas) in the next life. The money which is spent on anyone other than your blood relatives will bind Punya (good karma).

Read on to understand further on inheritance distribution while making a will from Param Pujya Dadashri’s discourse.

Questioner: We should get them married, shouldn’t we?

Dadashri: You can get him married, do all that. What is wrong when the foreigners say that the child will take care of his needs? Educate a child in whatever he is comfortable in, and when he is eighteen years old, he is on his own. What do the Americans say about these with a tuber of greed? They say, ‘Why do you Indians do this, accumulate money while depriving yourself? Eat, drink and enjoy yourself.’ (Indian will say) ‘Hey, do we not need to leave for those behind us (children)?’

A man asked me whether this meant that he should not give anything to his children. I told him, ‘You should give everything that you inherited from your parents. Any surplus should be spent on helping others (donate).’

Questioner: Even according to our (Indian) legal system, whatever one inherits from his parents, he has to give it to his children, and donate the rest to wherever he wishes.

Dadashri: Yes, you can decide to use it the way you want to. Therefore, leave aside whatever you earn yourself and use it to help others. Only that will carry forward with you into the next life. After attaining this Gnan, you still have one or two more births remaining, and you will need something for yourself. Even when you go out of town, you take some food along with you, so will you not need something for the next life?

All you need to give to your son is the house you live in if you own it. You should tell him, ‘Son, you can have this house after we die, until then we own it. But if you do not live properly and misbehave, then I will have to ask you and your wife to leave. But as long as we are alive, the property is ours. After we die, everything will be yours’. You should also make a will. Give to your son, whatever you inherited from your father. That is all he is entitled to. Do not divulge all your assets to him. Let him believe that, ‘My father only has about forty-fifty thousand’, but you may have a hundred thousand. He will think that he will inherit forty to fifty from you. Let him be in that covetousness until the end. And in his greed, he will instruct his wife, ‘Get something good for Dad to eat, bring some tea and snack.’ Live your life with pride. So, give your son whatever your father left for you. So, what do the foreigners say? They will say, ‘Whatever my Dad gave me, I give that to you. We have done nothing wrong or created any debt.’ 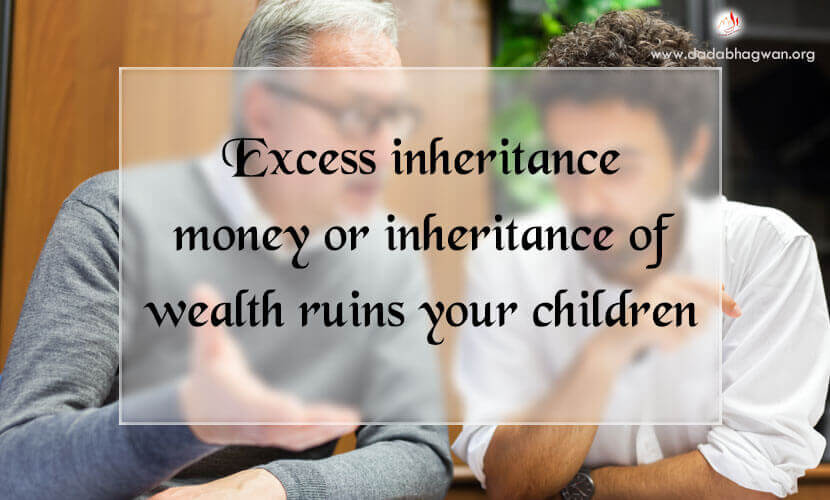 Dadashri: If you leave money behind for your son, he will become alcoholic. Therefore, parents are considered to have caused harm to him. You have to do that only when you have a surplus, don’t you? You should save just so much that he does not complain that my father ruined everything. And did anyone take any dollars from here (when he dies)?

Dadashri: No one is allowed to take anything along with him. They burn us on the funeral pyre when we go. If you leave an excessive amount of wealth behind, the children will think that there is no need for them to work for a living. They will start drinking alcohol and become alcoholic because they will fall into such a company (of alcoholics). So you should give to your children but within limits. If you leave them an excessive amount of money, they will end up abusing it. Make it so that they will have to work for their living. If they are idle, they will start drinking, won’t they? It is not good to depend on parents or grandparents wealth. It is like eating a cold khichadee, it should be eaten fresh, and it will be very tasteful. You will not enjoy the cold khichadee.

Questioner: Yes, that is true, Dada.

Dadashri: So you cannot give your son such cold khichadee. Help him get a business, a car, that is all. You should get him something, even if your father did not give you anything. You help your son start earning and help your daughter get married, that is your obligation.

If you have any other means, then you should help him start a small business of around twenty-five thousand rupees. That is all. Put five, (or) twenty, (or) twenty five of your own in it. If your son likes a particular business, help him establish it. Ask him which business he would like to do and then help him towards what he likes. Help him borrow about fifty percent from the bank and you help him some, and the rest he can keep making the payments. Give him half of what he needs and the rest he can make payments to the loan from the bank. So tell him to take a twenty-five thousand bank loan and make the payments on it. So such payments will make him wise. When he receives a letter from the Bank that he has not made a payment this year; that will keep him alert. And you should deliberately make him get the loan; it will make him financially responsible. Otherwise, (if you were to scold him) he will make you suffer to no end. And if you scold him, he will strike back. If the Bank scolds him he will not strike back.

What kind of a will should you make?

Questioner: If I want to make a will of my wealth for my son, so what kind of will is an ideal one, if I have a daughter and a son?

Dadashri: Give your daughter a certain amount. Ask the son, ‘What business do you want to run? What do you want to do? Do you want to do a job?’ Give him but only a certain amount. You should keep half of your wealth for yourself, private. Do not disclose that to him. Disclose the rest and tell him, ‘we need that as long as two of us are alive, don’t we?’ then help him get a loan from the bank (let him owe to the bank). He should not do the business without a loan from the bank. So he needs someone to push him so that he does not start drinking alcohol (as recreation). So do it systematically and with understanding.

Dadashri: As much as possible you should have created an overdraft (for the next life by giving it to others). You should make an overdraft by donating in hospitals, do Gnandaan (gift of Knowledge), and then give the rest to your son. You should increase that also a little. He has that greed, doesn’t he? So keep about fifty thousand for his greed, and get the overdraft for the other two hundred thousand, otherwise what will you do for your next life? Right now you are using the overdraft of the past life, so then do you not have to create an overdraft in this life? What is this called?

Dadashri; Yes, we have not given it to anyone. Using the money for the benefit of others, for the good of the people, that is called overdraft. People have given to the sons and regretted it, regretted tremendously. You have to understand how to benefit your son. You should come and talk to me. So what I am saying is that before going into the dirt (it goes to waste) do something that it is used for a good cause. It will be helpful when you go (as a good deed by giving to others) and when you leave (die) he will tie four coconuts, won’t he? And also what your son will say is, ‘Bring cheap ones without water in them.’ So use your money for good cause, use for other’s happiness. Whatever surplus money you have, if you use it to make others happy, only that amount is yours, the rest goes in the gutter (is a waste).


Read more on "Benefits of Charity"