How to break bad habits of kids?

Looking for how to break bad habits of your kids? Let’s get started! 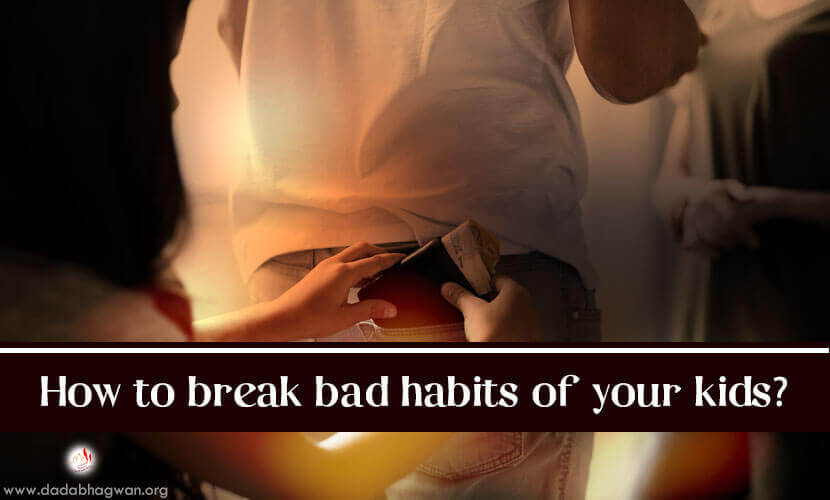 Consider the following cases and think what could be the reason behind each act.

From all the above cases, what is the common factor that makes the children do what they do?

‘UNDERSTANDING… Opinion about the act.’

This is the key to use when it comes to how to stop bad habits of kids. When a child steals, or has a grave habit, the first thing a parent should do is not to scold him/her and try to change their understanding. Every action is an effect. And the effect will change automatically, once the cause is changed. Instead, if you focus on the effect (action) and go around saying, “My child is like this; he is worthless, he is a thief,” what does the child do? He/she decides in his/her mind, ‘Let them say what they want to, I am going to do it anyway.’ So, the parents are turning this child into a thief even more. So, just drop the fact that he/she had done this and at least change his intent (bhaav) right now! Change the opinions (abhipraya) within them!

Pat them affectionately on the head and say, “Come here buddy! Would you feel happy (sukha) if someone took money out of your pocket, the way you stole from someone else? How hurt (dukha) would you feel within at that time? In the same way, wouldn’t he also feel the pain?” You have to explain that whole theory to your child. When you put your hand on him/her like this it makes the poor child feel good. His/her heart feels at ease. Then tell, “Child, we are well respected family”, and so forth. Then he will change his intent to, ‘It is indeed not worth doing this’.

Further, you may help the child apply the following steps to get rid of the bad habit.

The child should believe that it is not worth to steal. His/her belief gets stronger with the step-2.

Step-2: Analyze the positive and negative

Let him/her analyze what good he/she received by stealing and what would the consequences be, had he/she been caught. For example, the child has stolen Rs. 10/- from his friend’s bag to buy a sweet. He may be satisfied/happy when he could buy and eat the sweet he was longing for. Ask him affectionately, how he felt while he was stealing. Was he nervous about being caught? Did he think the consequences of stealing? Did he feel light or heavy in the heart during this whole process? What about his reputation in the class, if caught? Will anyone trust him again, etc.

You can also assure him/her saying that if he/she needs something, he/she can convince his parents to get it for him/her, instead of risking himself/herself to many grave consequences.

Pratikraman is a three-step process that is explained by Param Pujya Dadashri, to clear off all the mistakes or hurt caused to others. It also helps in uprooting the karmic causes sown for the next life.

Step-4: No protection of mistakes

Whenever the child repeats the mistake, ensure that he/she doesn’t protect his mistake. He/she should accept it that it is his/her mistake and will never happen. For example, when they steals and says that they needed it to buy a pen for their exam, and that was necessary at that time. When they feels that their stealing was right for that situation, they are protecting that mistake. Mistakes, when protected will never leave. So, whatever may be the reason, their belief should be that stealing should never be done. Even with this pure intent (which is the new cause), their action (effect of previous cause/intent) may be wrong. But as they are not siding their actions, the intensity of that mistake will weaken and will come to an end. Parents should be loving and should have patience, making sure that the child is working on the mistake by applying the above steps.


Teach children as how to do pratikraman as shown by Param Pujya Dadashri.